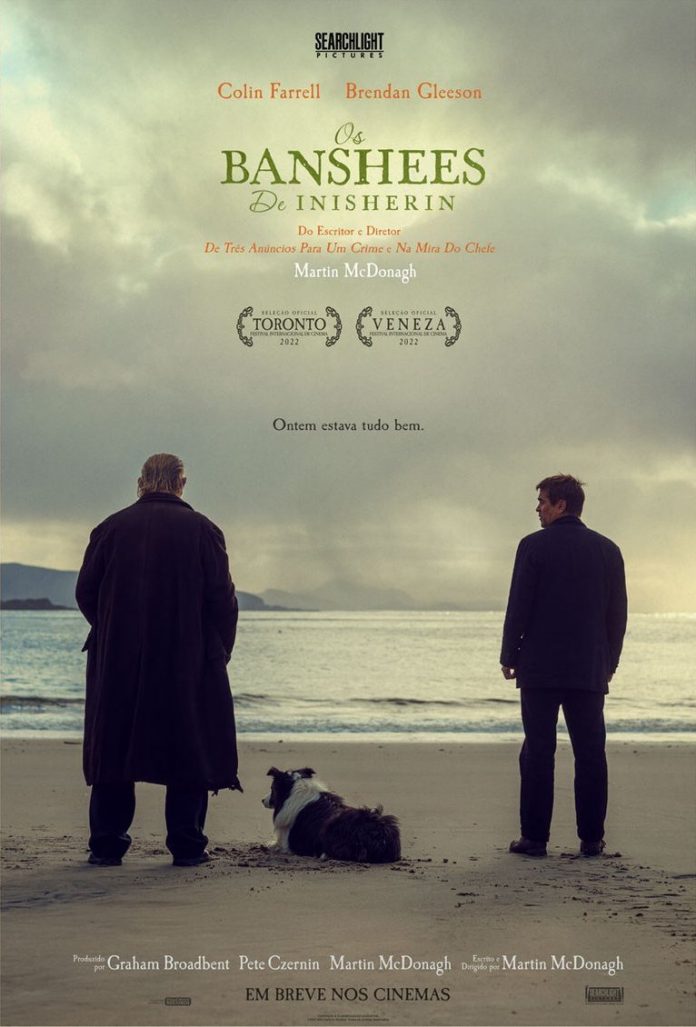 An often-hilarious exploration of depression and loneliness, The Banshees of Inisherin’s beautiful chaos makes it one of the year’s best films so far.

There are two types of bleak films; those that try to run from the futility of the human condition, and those that embrace it. Think of them as two different perspectives; the glass is half full, and the glass is half empty. The “half-full” films feature characters working to improve their lives and escape from unbearable conditions. These movies tend to have a brighter outlook amidst a sea of misery – a silver lining, if you will. Then there are those other films which don’t bother to put a positive spin on the doldrums – they just dive right in and gobble up as much as they can.

The Banshees of Inisherin

The Banshees of Inisherin is the second type of bleak film. It feeds off of the (often literal) self-inflicted harm of its main characters operating on their own levels of chaotic narcissism. It places its story in a situation that feels like quicksand, gobbling up the fates of characters with good intentions or not. Positive plot developments are bittersweet, and the more troublesome ones lead your mind astray to the darkest conclusions. Despite all of this, the film is the complete opposite of a torturous watch, mainly because it is so hilarious.

Martin McDonagh’s latest film is a black comedy, to the fullest connotation of that descriptor. It doesn’t necessarily find the light at the end of the deepest, darkest tunnel, but it does find drollery within disaster. The characters waddle in their own misery, stuck stubbornly in their paths leading to even more suffering. But the way the film frames their conundrums we can’t help but laugh. It is a fascinating investigation into depression and loneliness without having to resort to bludgeoning the audience with heavy emotional baggage.

The film takes place on the lush but fictional Irish island of Inisherin in the 1920’s. It is a very fitting setting for this story – a place of simplistic existence cast against the harsh elements of nature. While the Irish mainland is engaged in civil war, the inhabitants of Inisherin are embroiled in a more non-sequitous affair. Colm has decided he doesn’t want to be friends anymore with Padraic simply because Padraic is dull and Colm doesn’t want to waste any more of his time. Padraic doesn’t believe Colm is being serious and keeps confronting him on the matter. Colm resorts to an ultimatum, threatening to cut off his own fingers every time Padraic speaks to him. What results is an ever-escalating conflict between the two former friends.

But more than just a story about what seems like a childish disagreement between two grown men, The Banshees of Inisherin’s genius is the way it uses its supporting characters to guide the audience’s outlook on the film’s central conflict. Padraic lives with his sister Siobhan who struggles as the voice of reason but also her own isolation on Inisherin. While Padraic is too busy focusing on himself he fails to realize the struggles of those who actually do care about him. This includes Dominic, a young man with a troubled reputation, but also a physically abusive father who happens to be a policeman.

Colm is a connoisseur of music. He plays the fiddle, which is the only source of entertainment  on Inisherin besides drinking (and juicy gossip). This talent makes it easy for him to find companionship and connections with others who share his interests. Padraic does not have any applicable talents besides being nice, and as a result becomes jealous of Colm once they are no longer acquainted. Padraic’s closest companion is his pony, which Siobhan won’t let him bring into the house. The lack of control over his own life causes him to act out in desperation, and in the process he compromises the personal qualities he once held sacred.

The film’s setting serves as the ultimate antagonist. Not because it is especially dangerous, dark, or disturbing, but because of the way the isolation ultimately impacts the personal growth of those living on Inisherin. The film’s stunning cinematography conveys a sense of suffocation despite the wide open spaces and compelling contrast between green and gray. Establishing shots depict the vibrant countryside entangled in a maze of stone walls and constant haze. The characters wear thick woven clothes, and peer out over chillingly dark bodies of water. Despite the beauty there is a general unease, which becomes more and more prevalent as the film moves forward.

As the central conflict escalates, the audience’s allegiances may flip-flop, but the morals become muddled. I credit the film’s excellent performances, which add enough complexity to the characters to prevent the whole incident from feeling like a whimsical farce. Brenan Gleason portrays Colm in such a way that it is easy to understand he still cares for Padraic despite his rude behavior towards him. He has these excellent wordless moments where he tries unsuccessfully to convey his compassion towards Colm. My favorite shots of the film are those of Colm trudging up the island’s steep windswept hills as if he is trying to get away from his own decision, taking every ounce of his strength not to turn around.

The film’s all-Irish cast creates a unique and memorable impression. Colin Ferrell portrays Padraic with a sort of childish naivete. While Colm’s actions are mostly well-articulated, Padraic seems to fly around by the seat of his pants which only tends to make his situation worse (but more entertaining). I especially loved his interactions with the always excellent Berry Keoghan who portrays the wayward Dominic. Whereas Dominic exists as a tangled mess due to his youth, he at least appears to possess the types of larger guiding ideas which Padraic lacks completely. Last but not least you have Kerry Condon who portrays Siobhan with a more thoughtful outlook compared to the other characters, though no less self-serving.

It is through Siobhan which the film sees its most pronounced change. In many ways all of the characters introduced are essentially stuck in their ways on Inisherin. It is a purgatory of existence – not turbulent, but not exciting. The way the inhabitants express indifference towards the outcome of the Irish civil war speaks to the monotonous perspectives they have on life in general. Siobhan’s experience with her brother’s feud convinces her to examine her own life, and consider making a necessary, but very difficult change.

The Banshees of Inisherin is named after the title of a song written by Colm through the course of the film, and represents a ‘damned if you do, damned if you don’t’ theme present in the lives of all the major characters. For Colm, he has to choose between completing the song or maintaining his relationship with Padriac. While both options may seem positive on the surface, the film twists them into torturous outcomes with incapacitating (and devastating) results. For this reason Colm comments on how his Banshees are silent, and so collectively the island moves headlong into danger without even realizing it.

Director Martin McDonagh shows off both his talents as a director and as a writer. The script is equal parts funny and sad, but always witty and succinct. In many ways it does feel like the type of stage play upon which McDonagh had cut his teeth, but his camerawork brings in enough cinematic flow that it never feels static or stiff. The fact that McDonagh and his cast and crew can take such disheartening subject matter and make it entertaining and positively interesting speaks volumes of their talents and creativity. The Banshees of Inisherin is an emotional gut punch, but in all the right ways.