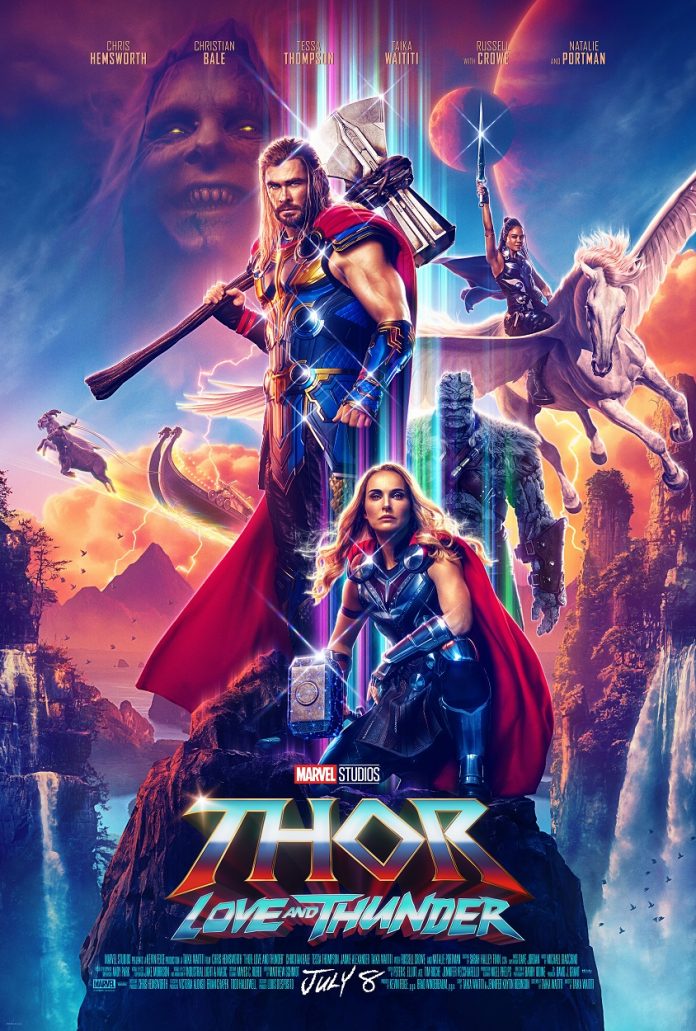 The Marvel Cinematic Universe continues with Thor: Love and Thunder, an entry that brings plenty of fun, but can find its balance.

Thor: Love and Thunder has continued a significant trend in Marvel’s fourth phase: a divisiveness among fans that has seemed more present now than in any previous phase of the franchise. As we see Marvel begin to break the formulaic shackles of previous outings it seems it risks a divided fanbase with each new project.

To kick off with the positives, Thor: Love and Thunder is a Taika Waiti movie through and through. His style feels ever-present throughout the whole film, which gives it a distinctiveness from the rest of the MCU in a similar way to Sam Raimi’s Doctor Strange in the Multiverse of Madness.

Whether you love or hate some of Marvel Studio’s recent projects, directors having more control over their projects can only be a good thing and it begins to set a precedent for continued diversity in Marvel stories.

Humor is executed well and, while I think jokes didn’t land quite as consistently as they did in 2017’s Ragnarok, there’s still a lot of fun in the film. Especially regarding Thor’s relationship with Mjolnir and Stormbreaker as his axe becomes the jealous ex of the film who begins to act out when summoned.

Thor’s arc is really brilliant. When the film suggested a reinvention of the character I felt like we’d been here before, but it shines new light on his mental state and relationship with Jane that re-contextualizes his overall character in a remarkable way. By the end of the film he feels legitimately reinvented in the most interesting way possible.

Equally, the real heart of the film is put together beautifully. The tragedy of Gorr’s origin and his twisted persona as the cross-sword corrupts him is sold brilliantly by Christian Bales’ performance. He becomes a truly compelling villain as you can completely empathize with his motivations.

Jane Foster’s story also gave her, her relationship with Thor, and the film some real depth that added a lot to the two characters. Many comic fans will have seen the storyline coming and while I’m not sure it was executed to quite the same quality, it was probably the film’s most compelling aspect.

However, the film’s struggles come from the mixing of these elements. Taken on their own, these scenes are both executed well. The cutting between them, however, makes a jarring contrast that threatens to give the audience whiplash. When we cut from a terminally diagnosed Jane Foster to Thor and some screaming goats, it pulls you out and threatens to devalue both scenes. Rumors suggest this film was mandated to run no longer than 2 hours by Marvel and it does make you wonder if the film could have benefited from a longer runtime to streamline tonal shifts.

Waititi has tackled tragedy and darker themes while still maintaining his goofy humor to great effect in films like JoJo Rabbit or Hunt for the Wilderpeople.  Why Love and Thunder couldn’t nail that to the same extent is an intriguing question. Perhaps more time spent with the characters could have fixed this…

Valkyrie is a pretty good example of what I mean here. She has a pretty solid arc, showing how she resents ruling and misses being a warrior; and closing herself off from love after losing her sisters and girlfriend to Hela. However, by the third act, she sits out of the final battle because she’s King? Her actions at the end feel more driven by a script that demands Thor and Jane are only present at the end rather than any actual logic.

Speaking of Valkyrie I’d like to address the LGBTQ+ rep in this film. It’s good…I think. I feel like I should be happy with it. Valkyrie is openly gay, she kisses a woman’s hand and her girlfriend is mentioned. Korg is also confirmed to be gay and had two dads. Overall, however, I was kinda disappointed. Tessa Thompson said at this film’s announcement that Valkyrie would be looking for her Queen, and yet her characterization is in complete opposition to that.

This film has way more rep than 99% of the MCU, and that’s undoubtedly fantastic, but I do feel like there were some misleading depictions of this film and how it would represent the LGBTQ+ community. Nonetheless, it is still nice to see Marvel start to give as much attention to representation as they do to other aspects of their projects.

I think Marvel maintains consistent CGI quality in their films. A narrative of Marvel’s CGI quality dipped has seemed to grow greatly with the release of this film but I think fans fail to remember that this has always been present with Marvel. Since the first Iron Man, Marvel has crafted films with flawless special effects save a couple of shots that always stick out. It’s not a new thing and to hyper-fixate on some less-than-perfect shots feels to me like it devalues the incredible work of VFX artists.

The action was choreographed fairly well, I’ve mentioned this in previous reviews but Shang-Chi has set a bar so high I find myself not as impressed by action in Marvel recently. It’s a disconnect I need to start making but it is there nonetheless. Regardless, the action was a lot of fun and easy to follow, Jane’s fractured hammer and Zeus’s lightning bolt made for some inventive and fun new abilities.

Something that particularly stood out to me in this film was its worldbuilding. The various worlds and Gods we see felt like they legitimately expanded the universe in fun and interesting ways. I like how unafraid Marvel is to get goofy now. The MCU feels very in line with the comics in that anything can, and will, happen regardless of how silly and weird it is. I loved the Bao dumpling god!

By the end of the film it’s undeniable I had a good time and I think the latter half balanced its humor and darker themes well with a genuinely heartfelt and hard-hitting conclusion. Jane’s death, Gorr’s wish and his daughter’s return all came together in a really beautiful scene that wrapped together the core themes of the film perfectly.

The film’s end credit unveils a vengeful Zeus commanding Hercules to remind people to fear the gods has me incredibly excited for the future of the franchise. Brett Goldstein looks to be a brilliant Hercules and Superheroes vs Gods sounds like one of the coolest premises a Marvel movie could have.

Coupled with Dad Thor raising Love, a new cosmic being who will wield Stormbreaker, the film left me more excited for a sequel than I have been for any. I love the MCU and will always watch each installment, but I’ve never been this hyped for what comes next.