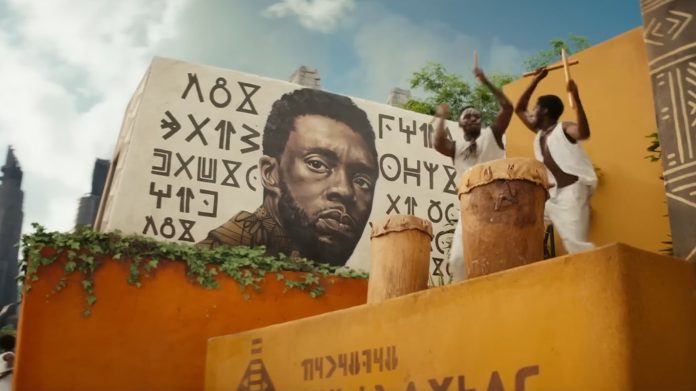 2022 is coming to a close and as I’ve done in the past, I want to take a look back at some of the incredible movie trailers audiences were treated to.

As has been stated many times in the past…I LOVE movie trailers. They are an art unto themselves as they must strike a balance between getting the hype going for a film without giving too much away (the good ones anyway). Hell, I still go back and re-watch some of my favorite trailers over the years.

Anyway…This past year, with theaters well and truly “back” in action, studios delivered a deluge of trailers to get audiences back in the seats. It was a stellar year for impressive trailers and made cutting down this list tougher than it’s been in a while. Let’s get to it!

[Note: The list includes trailers that released in 2022, regardless if the movie itself has launched yet.]

As always, there’s no official “ranking” in my list this year, but if I happened to do so, there’s little doubt Wakanda Forever’s first trailer would be at the top. This was a film many fans were eager to see footage on, if only to see a glimpse into how the new story would handle the tragic passing of Chadwick Boseman.

Between the musical choices, the hints of the story, and our first look at Namor in action, this is a teaser that delivered on all fronts. While the second (full) trailer was impressive as well, this teaser still manages to give me the chills.

While the film itself ultimately proved to be…well, an interesting bundle of choices, there’s no denying how awesome this first trailer for Halloween Ends is. As the promised conclusion to this trilogy, it does an excellent job of tying together the threads from the previous films, while hitting the pitch-perfect nods to the classic film as well. All of this without really giving much away of the new plot, but teasing the showdown fans had been wanting. Even watching it now, knowing how the film plays out, it’s got me eager to see what comes next!

Everyone knows I’m a sucker for dinosaurs and the Jurassic franchise in general. So it shouldn’t come as much of a surprise to see Dominion land a spot on my list here. The first trailer for the “final” Jurassic World movie delivered in a number of ways. Getting to see the dinosaurs interacting with the “real world” is something I’d been wanting to see for a while. Combine that with some impressive shots of new creatures, and seeing all of the original cast together once again, and my heart was soaring when this trailer first hit.

Indiana Jones and the Dial of Destiny (Trailer #1)

I’m sure nostalgia, and my own fanboy nature, plays a part in this…But I’m pretty sure the first trailer for Mangold’s Indiana Jones film is better than whole movies I’ve watched this year. It’s just damn good. It manages to pack in the sense of fun/adventure fans come to expect, along with an impressive look at the VFX (younger Indy!) they’re using. While the plot still remains largely unknown, the teaser sets the perfect tone and makes Harrison Ford look more than ready to keep going.

This is, far and away, the shortest trailer I’ve listed on here. So shot, in fact, I really debated on whether or not I should even include it. In some ways, however, that’s a big factor in the brillance of this teaser.

While it’s all too brief, our first look at Dan Trachtenberg’s Prey does exactly what it needs to. We get a glimpse of Naru running from something, and the tension is certainly palpable. Once that iconic tri-laser targeting fires up, however, fans instantly know what they’re getting. It’s a thrilling “legacy” style trailer that plays into the nostalgia of fans while clearly showing off the newness. It’s all the excuse I need to go watch it again.

The first trailer for Nope does just about everything right. In many ways, it works as a mini-movie on its own as it introduces us to the main characters as things begin to get progressively creepier. What starts off as a slow, subtle bit of ominous-ness, builds to a crescendo of quick cuts that tease all manner of terrifying images you’re not entirely sure you want to see in full.

Having seen the movie now and knowing it’s more creature feature than alien horror, it’s impressive to see how much this first look actually leans into those monster movie tropes. It was in plain sight all along.

I’m pretty much always down for whatever Alex Garland wants to do. While the end result may not always work for me (as was the case with Men), the ideas he presents and the overall style to his storytelling are always intriguing. The first trailer for Men sets the stage pretty perfectly for the folk horror audiences had awaiting them. Between the continual echoing sound effect and seeing Jessie Buckley become hunted/stalked by something unknown, the trailer makes it clear we’re in for something intense.

On the surface, the Creed III trailer is relatively straightforward, but something about it managed to hook me on another level. It’s not necessarily heavy on the action, but does an excellent job setting the stage for this new chapter. In quick order, we’re introduced to a new character, giving us another glimpse at Adonis’ previous life, along with the baggage that will entail. By the end, your blood is pumping and ready to get up and start kicking in doors. If the film can maintina the intensity, we’re in for something special.

Knock at the Cabin (Teaser)

Say what you will about M. Night Shyamalan movies, but you can’t deny pretty much all the trailers to his films are incredible. The first trailer for Knock at the Cabin is no different and does an excellent job at setting the overall tone, while being chilling in its own unique way. Things start off simple and idyllic but continue to escalate from creepy encounters, to home invasion, to talk about the end of the world. You’re not quite sure what’s going on, which makes the presence of these strangers all the more frightening.

Spider-Man: Across the Spider-Verse (Trailer #1)

Across the Spider-Verse is easily one of my most anticipated films of 2023. The first Spider-Verse film continues to play at the house on a regular basis and it somehow never gets old. Thankfully, the sequel looks to expand on that and still be all kinds of amazing. Recently, fans were treated to the first actual trailer for the film, showcasing a HOST of new Spider-sonas, more impressive animation, and a good helping of emotional gut-punches.

As I said, there were so many great trailers released in 2022, that it was hard to narrow down. The Menu, Guardians of the Galaxy Vol. 3, Cocaine Bear, Barbie, and even The Super Mario Bros. Movie deserve some honorable mentions here, and that’s not to mention some of the STELLAR TV trailers we’ve seen (Andor and The Last of Us immediately spring to mind). With 2023 bringing some heavy-hitting movies, let’s cross those fingers the trailers are equally epic.