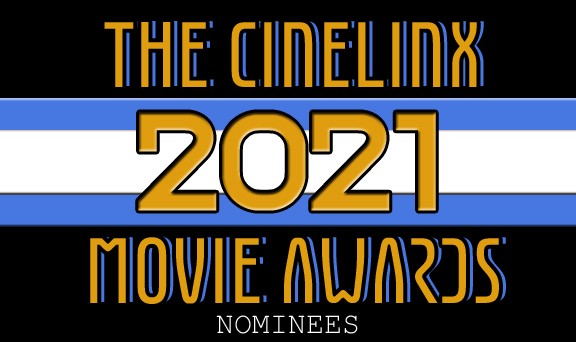 2021 was an incredible year for movies both big and small. Join us as we present the categories and nominees for the 2021 Cinelinx Movie Awards (“The Linxies”), and invite you to help select the winners.

2021 was an incredible year in film. Unlike the year prior, 2021 actually allowed us to watch movies in theaters if we wanted. But more important than the additional freedom we enjoyed in watching the newest films on the big screen, film seemed to become more accessible than ever. With streaming services producing their own films more frequently than ever before, and with major studios continuing to move towards streaming releases of major motion pictures, there was plenty of opportunity to find something interesting to watch.

But, not all films are created equal. Some of them have stood out more than others, and to celebrate those films that succeeded above the rest we honor them in the annual Cinelinx Movie Awards. Listed below are the categories we’ve chosen to highlight all of the hard work that goes into movies. These categories reflect accomplishments in many different areas of film production. The nominees have been selected as our picks for the best representation of each category. In order to be eligible for our awards, the film has to have been released during the 2021 calendar year.

Now comes the fun part. We need YOUR help to determine the winners. Simply use the ballot below to select the actors/actresses/filmmakers/films you feel should win in each category. You have 4 weeks to decide, the winners will be announced on Monday March 7th! (MAKE SURE TO HIT THE “SUBMIT” BUTTON AT THE END OF THE BALLOT!!)

[Editor’s Note: This year, we’re having a bit more fun with our readers and on top of letting you pick our winners we’re making YOU winners as well. We have a number of digital movie codes we’ll be giving out over the next several weeks while voting is open.

We’ll announce the movies being given away on our TWITTER, so be sure you’re following us there, but the main thing you’ll need to do to win…is vote. ONce we announce the movie giveaway on social, we’ll be contacting all winners via the email addresses given when voting.

You’ll only have to vote ONCE in order to win and be eligible for all the giveaways (no double-dipping for winners though). So if you don’t win on one week, you’ll still be entered to win later prizes! Seriously, that’s it. Just give a vote, share with your friends, and you’re entered for a chance to snag free movies!]