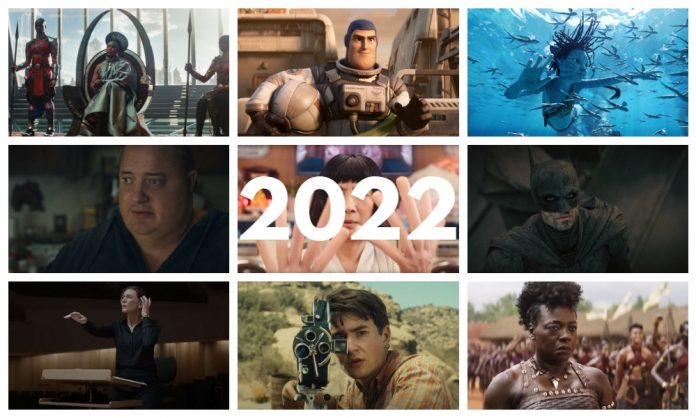 A reflection on the past year in film, with better variety and box office success than in recent times. But the mixed results of Hollywood’s decision to essentially double down on itself does raise questions for the future of the industry.

2022 was a very important year for the film industry. For the first time in three years, audiences could (essentially) see movies in theaters without pandemic-motivated restrictions. Studios were anxious to see what type of turnout their films would attract in theaters, and whether it would be possible to return to pre-pandemic business levels given changes in audience preference and the rise of streaming services.

In other words, it seemed like 2022 would be a litmus test on how the industry can expect to move forward. On one hand with more releases in theaters, it would be a good indication of how willing people would be to return to theaters. Likewise the box office performance of highly-anticipated big-budget films would help to demonstrate whether streaming services have changed our perspectives on those types of releases. 2022 is the best opportunity yet to determine if Hollywood could continue with business as usual, or if changes would need to be made for upcoming releases in order to better accommodate shifts in the marketplace.

And what exactly, does 2022 have to tell us about the film industry as a whole? Well, unfortunately it is not as clear of a picture as studios or film buffs might have been hoping. Business is improving, but it will take more time to determine if this is a step in an upward trend or a short-term boom associated with a higher quantity of films being released in theaters compared to the last two years. There have been mixed successes in nearly all areas, and market predictions remain difficult to get a handle on. However, there are some notable and important observations which can be made.

First, people are going to the theaters to see movies, but not (yet?) at the same rate as pre-pandemic. The 2022 domestic box office total is expected to finish around $7.5 billion, which is about 35% less than 2019 but up from $4.5 billion in 2021. That is a significant growth year-over-year, but we’ll have to wait until the end of next year to see if that is sustainable. Studios don’t necessarily expect the market to return to pre-pandemic levels, but it is tough to know exactly how much it will fall short, and if it remains consistent or not.

The second major observation is the fact that international markets are continuing to be extremely important to major studios’ bottom lines. As we have seen over the last few years this has changed the way Hollywood has approached its big-budget films. No longer are these major releases solely geared towards traditional movie markets, they have to be able to appeal to the tastes of the international markets as well. But in the past when Hollywood could simply have their films exist in both spaces, a threshold was quickly being approached where that may no longer be feasible.

Looking at the top ten highest-grossing films of 2022, all of them have achieved more than 50% of their box office proceeds in international markets. Compare this with 2019 and all but two of them were less than 40%! That is a significant shift in a short amount of time. Part of this has to do with the impact of the pandemic, closing some domestic theaters. But more importantly it reflects a shift where a majority of Hollywood’s profits are now coming mostly from overseas. With domestic box office totals being less than what they were in 2019, Hollywood will certainly be chasing those profits if it has any hope of maintaining the scale at which it currently operates.

With this type of a shift towards international markets already underway, it is therefore very interesting to consider the types of films Hollywood released in 2022. The three highest-grossing films of the year will probably end up being Top Gun: Maverick, Jurassic World: Dominion, and Avatar: The Way of the Water. What do these three films have in common? They are essentially delayed sequels to some of Hollywood’s greatest hits from the past. Almost all of the other films atop the box-office chart for 2022? Superhero movies.

In other words, the films of 2022 seem to reflect a kind of stubborn commitment to familiar formulas which have proven track records. Avatar: Way of the Water represents this year’s biggest risk, but not because of the content of the film, just its massive budget. Hollywood is perfectly comfortable churning out the same product but in a new wrapper. That approach has worked just fine over the last 10 years, and until now there hasn’t really been a reason to stop. This is exactly the same approach we saw before the pandemic, and it feels like Hollywood is going back to what feels familiar in order to test the waters.

But such an approach has its flaws, and we are starting to see some occurrences that might suggest chinks in Hollywood’s formidable armor. Chief among these concerns is audience fatigue of tentpole franchises. Reaction to the MCU’s phase 4 has been mixed. The DCEU is back to the drawing board. The Harry Potter franchise is running on fumes, and we’re in a big gap between Star Wars movies. Disney attempted to compensate for lack of theatrical success by piling more food onto the plates of Star Wars and MCU fans in the form of streaming shows. But that explosion of content has not renewed interest in those franchises, only seemingly watered them down.

Yes, there are new Star Wars movies on the horizon. The MCU isn’t going away, and the DC film universe has some promising new beginnings. But it has yet to be seen if those types of films will continue to be as successful at the box office as they have been in the past, even with expanding international contributions. Those type of major-franchise films released in 2022 have mostly underperformed as compared with similar films released pre-pandemic. Again, this may just be a sign of the market ramping up again, but it could also signify a new normal.

One major surprise of the year was Everything, Everywhere, All at Once. It combined our fascination with bonkers every-flavor filmmaking as seen in the MCU with more homely, indie-picture vibes. It was a conglomeration of our contemporary movie tastes, brought to life with a vibrancy and experimentation that seemed to resonate well with audiences looking for something flashy to lure them back to theaters. Indie films continue to grow in popularity, especially among the younger generations which share many of the perspectives of the filmmakers who create them.

The other biggest surprise of 2022 was Top Gun: Maverick. This film was delayed from its original release date, and its old-fashioned blockbuster approach didn’t really fit in with its contemporaries. But it found massive success at the box office and with critics because it was both familiar and different from the modern movies it is competing with in theaters. When done correctly, nostalgia has always had staying power, and this film tapped into “the good ol’ days” we long for in these challenging times.

But Top Gun: Maverick wasn’t the only film that relied on Hollywood’s past for inspiration. There was a strange influx of performance-art-inspired prestige pictures hitting theaters this year. Movies like Babylon, Empire of Light, The Fabelmans, Blonde, The Unbearable Weight of Massive Talent, Elvis, Weird: The Al Yankovic Story, Official Competition, and Tár all reflect on the showbiz industry in some way. In particular, movies like Babylon, Empire of Light, and The Fabelmans seem to reflect upon classic Hollywood – essentially reminiscing on the past, for better or for worse.

This push follows a more widespread sentiment for going “back to the basics” which may be why Top Gun: Maverick resonated so well. These film’s aren’t necessarily commenting on how the past was better than today, but they provide a sense of familiarity which the general populace isn’t finding in their day-to-day lives in the face of so much rapid change in many facets of society. Indeed, the movies aren’t as escapist as they used to be. Having to stay up to date on the latest MCU release or figure out which iteration of Batman is pertinent takes its toll on casual audiences. The effect of the pandemic has shifted many people to be more casual movie watchers than before, and filmmakers are trying to tap into this sentiment at all levels of film.

It is also a matter of Hollywood trying to appeal to a new generation. Millennials who made up a large portion of intended audiences in the 2010’s are getting older and starting families. They are not going to the movies as often, and don’t have the time to stay up-to-date on streaming programs to fill in the gaps between. The pandemic may have expedited this process. In the MCU we see the shift of focus moving towards younger characters. Younger audiences place more importance in representation and gender equality than older generations, and we’re seeing Hollywood respond.

Films like Triangle of Sadness, The Menu, Amsterdam, Emily the Criminal, and Glass Onion: A Knives Out Mystery have plots that discuss corruption and wealth inequality. Movies like The Princess, The Woman King, and Prey put women in lead roles of well-received practical stunt-driven films. Nope, Elvis, Blonde, and Pearl/X focused on show-biz exploitation. Meanwhile, in the horror genre it seemed like we saw more films with contemporary concerns and socially-conscious messages such as Men, Barbarian, The Black Phone, and Bodies Bodies Bodies.

Another interesting trend is the fascination with late 80’s/early 1990’s films and television shows from that era. Sequels/prequels/remakes to 90’s films include Jurassic World: Dominion, Lightyear, Scream, Father of the Bride, Clerks III, Beavis and Butthead do the Universe and Matilda the Musical. New versions of late 80’s entertainment include Confess Fletch, Top Gun: Maverick, Prey, and Chip n’ Dale: Rescue Rangers.

Overall, 2022 had a LOT of sequels/prequels/remakes to take in. Notable sequels include Ice Age the Adventures of Buck Wild, Minions: The Rise of Gru, Sonic the Hedgehog 2, Death on the Nile, Puss in Boots: The Last Wish, Black Panther 2: Wikanda Forever, Thor: Love and Thunder, and Doctor Strangelove and the Multiverse of Madness. Remakes included All Quiet on the Western Front, Hellraiser, Firestarter, Death on the Nile, The Texas Chainsaw Massacre, Cheaper by the Dozen, and Living (and arguably, The Batman). We had not one, but two versions of Pinnochio, and an original horror release and prequel in X/Pearl.

With all of this in mind, 2022 is a year in film that felt like it was looking backwards rather than forwards. It felt like it yearned for classic, comforting movie magic, rather than stepping forward into unexplored territory. Hollywood continued to churn out the same blockbuster fare which has been successful as of late, but to diminishing returns thanks to continued changes in the marketplace. It remains to be seen if this is a sustainable practice. Meanwhile, a more critical eye on the showbiz industry, as well as more socially-conscious filmmaking did allow for many films across all genres to find some semblance of relevance in the crazy world we live in. It was a year for re-living greatest hits, rather than creating new ones.

For a recap of the previous year in film, check out: 2021: The Return of the Movies