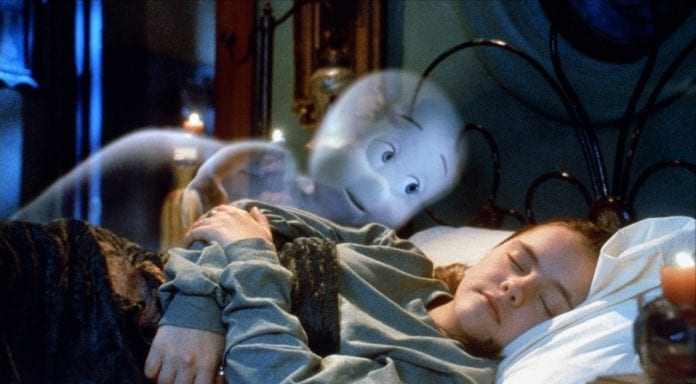 Seeing as it is October, it’s time to fill the days with spooky movies of all kinds. This includes Casper, a 1995 film that remains essential Halloween viewing to this day.

I was surprised to discover that Casper turned 25 years old this year. It doesn’t seem possible for the film to be so old, because it’s held up extremely well for a film that was made in 1995 with mid-90s CGI. The film is based on the popular comics character “Casper the Friendly Ghost” and expands on the titular ghost’s backstory.

Casper, in this movie, is a lonely young ghost who just wants a friend. Opportunity arrives when Kat (Christina Ricci) arrives at his home of Whipstaff along with her father Dr. Harvey (Bill Pullman), the latter of whom is searching for the ghost of his late wife after her untimely passing. However, the father and daughter duo also have to deal with Casper’s not-so-friendly uncles and the scheming of spoiled-brat-heiress Carrigan Crittenden (Cathy Moriarty) and her lawyer Dibs (Eric Idle). The film, as I said before, holds up quite well. The CGI for the ghosts is impressive and haven’t aged at all, even with an upgrade to Blu-Ray. And the story of Casper and Kat remains as endearing as ever. As a kid I could always identify with Kat, a girl who has trouble fitting in and making friends (albeit not for the same reasons). And now that I’m grown, I find I also identify quite strongly with Dr. Harvey’s desire to see his wife again. The end of the movie when he finally reunites with Amelia, just for a moment, is pure emotional magic and it moves me to tears every single time.

Of course a lot of this magic is facilitated by the stirring score composed by the late James Horner. I’ve felt for years that Casper is one of Horner’s best scores and rewatching this film just confirmed it for me. My favorite part is “Casper’s Lullaby”, the haunting melody that recurs throughout the film, but notably when Casper is recounting the circumstances that led to his death. Like all of Horner’s best themes, this melody is simple, haunting, and it just tugs at your heartstrings. Casper is a good movie all on its own, but Horner’s music is what makes this film great. I also have to mention that Whipstaff Manor, where most of the film is set, is even more beautiful in Blu-Ray. I remembered vaguely that the house was based on some unusual designs, but in the upgraded format the details just pop off the screen. I forgot just how much stained glass there is in the building. The house makes a great setting for the story. I also love that the house has secret passages and strange inventions inside it (if I could live in this house I would).

If you’re looking for a movie to watch during this Halloween season, look no further than Casper. It’s got some minor scares (and one really depressing scene), but is otherwise a fun story perfect for this spooky season. That’s why I say that 25 years on, Casper remains essential Halloween viewing.

Science Fiction Has Been Intertwined With Horror Since It Began