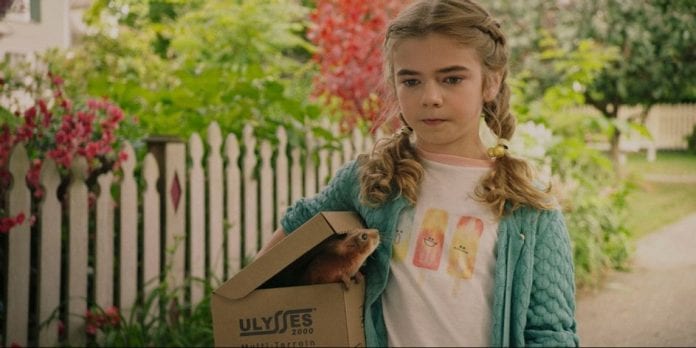 One of Disney’s most recent Disney+ original films set to stream on February 19 is Flora & Ulysses.

Based on the charming best-selling children’s book of the same name by Kate DiCamillo, Flora & Ulysses is an unconventional superhero story that explores purpose, excitement, and the role of superheroes.

There is no doubt that Flora & Ulysses is a good story: Flora is a comic-book loving 10-year-old struggling with her parents’ separation and the fact that superheroes do not show up in the real world. However, she is given a new lease on life when she rescues a squirrel from an unfortunate encounter with her neighbor’s new vacuum: the Ulysses 2000X. The squirrel, who Flora subsequently and aptly names Ulysses, can eat (boy, he loves to eat), write poetry, and fly. Perhaps even more importantly, he restores hope and unites Flora’s family, bringing renewed excitement and fulfillment to their humdrum lives.

While the book is fun, funny and endearing in its comic-book layout which is not only a solid choice for superhero content but also plays into specific references in the story, the translation to film is not as funny. It tries really hard to be funny but falls flat. The child characters seem to be very grown up while the adults are boring 2D versions of characters that would otherwise have worthwhile depth. The eccentricity of the characters is lost on screen. Flora’s parents are played by Allyson Hannigan and Ben Schwartz, so I would have thought they could not have been better cast in terms of comedic potential. Alas, perhaps it was more of a direction misstep. Either way, the clever comedy was lacking.

The backstory was well set up and had did have some funny moments: Flora’s mom is a novelist and her father a comic book writer, though both are living strained lives due to their separation and floundering careers. In the beginning of the film Flora describes herself as a cynic, largely due to the separation of her parents and lack of any present excitement. If the film is not going to be as funny as the book, I would hope it will draw me in on a more thematic level. I was therefore engaged by the introduction in the hopes that Ulysses would give us new perspective on the trials and tribulations of life that will sometimes remain changed.

While Ulysses does do this to some extent, (spoiler alert) Flora’s parents end up back together and full-circle happily ever after is attained. If the children are going to be written into the story as being grown up and wise beyond their years (largely reflective of real life which I applaud in a lot of more recent Disney films), why couldn’t we stick to a “things don’t always turn out like a fairytale but there is still excitement and fulfillment in the world and we can manage to get by” approach? Perhaps that overarching theme is too cynical, even for Flora (and Disney).

Disney magic and life lessons (such as sense of purpose and the importance of change) weave in and out of the story but they do not pack the punch they normally would because of the aforementioned shortfalls. Flora and Ulysses are undeniably a cute duo with a lot to give to the world, and while some kiddos might really love this film, I would recommend the book first and foremost.

Flora & Ulysses is set to stream exclusively on Disney+ beginning February 19. Check out the trailer below.