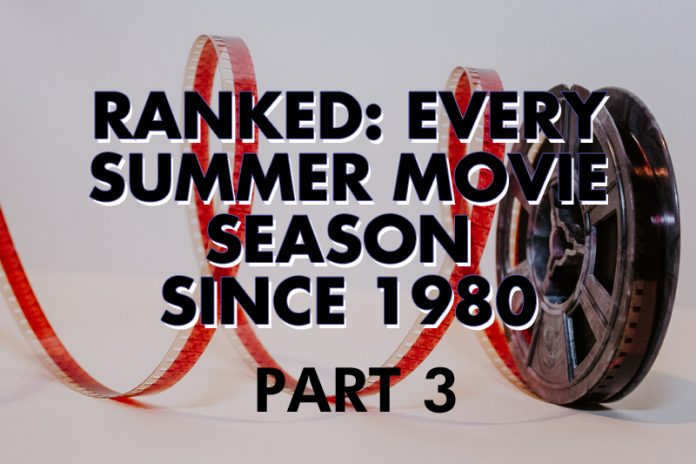 Back in 2014 I created an algorithm to compare summer movie seasons. The purpose of this algorithm is to determine which summer movie seasons were the best, and which have been the worse. But a lot has changed in the movie landscape since 2014. While studios saw increased business and interest in their big-budget summer movies during the end of the 2010 decade, the impact of the pandemic and explosion of streaming options have had a negative impact on what had been traditionally the most exciting part of the year for those of us who watch films. I was interested to see just how significant the decline had been over the last three years, and to do so I decided to input those years into my summer movie algorithm.

Over the next week or so I will release my ranking of every summer movie season from 1980 to today (that’s 43 years of movies!). Hollywood had to do its fair share of experimenting over the years to determine what types of films would be most successful, and audience taste has certainly changed quicker than studios could catch up. As a result, some summer movie seasons have been better than others. We’ve reviewed them all for you and ranked them from worst to best. Check back later for Part 3 and 3!

Here is a diagram that explains all of the data that is listed below:

Now that we have all this data, let’s put it to good use! Here’s our ranking of summer movie seasons, continuing from Part 1, ranking from worst to best….

1999 saw a large number of summer films released, and it had a lot of hits that have stood the test of time. The Mummy, Star Wars: Episode 1, American Pie, Runaway Bride, and The Sixth Sense were all very popular films that have left a lasting mark despite mediocre critical scores. Even some of the duds have become cult classics; The Iron Giant, Eyes Wide Shut. Unfortunately, 1999 had a lot of duds. Star Wars Episode 1 gave a new generation of movie watchers an experience they will never forget, but Wild Wild West created a new definition of excess.

What stands out about the 2016 summer movie season? Quantity. 2016 has the second-most films released May-September since 1980, and quality is not too bad either. There was representation from a bunch of major film franchises (MCU, X-Men, Ice Age, DC, Star Trek, Jason Bourne), and new versions of a lot of classic favorites (Finding Dory, Tarzan, Independence Day, Ghostbusters, TMNT, Pete’s Dragon). Most of those new versions failed to live up to lofty expectations, but they were still very exciting releases (throw Warcraft into that boat too). Interestingly, the films which have become more popular over time from summer 2016 were some of the films that audiences didn’t connect with as much upon their release (The Nice Guys, Popstar).

2022 is the first summer movie season “post-pandemic” and the cinema landscape has changed significantly. Specifically, there were a LOT of films released on streaming platforms, and those films were often just as expensive to make as the films that would typically end up in theaters during the summer. The algorithm can’t really track the popularity of those films the same way we track films that make it into theaters, but looking at their ratings does give us an idea of how well they are being appreciated by audiences and critics. Suffice to say, 2022 had a ton of highly-rated films. Even the duds all had scores above 70% except for one. Maybe the films released this year won’t have as lasting an impact as films of the years ranked higher than this, but its hard to argue with quality and quantity, and 2022 had those in spades.

2018 was chock-full of sequels and spin-offs, so fans of those franchises had something to look forward to. More impressively was the fact that most of those sequels/spin-offs lived up to expectations. But what allows 2018 to land in this position is the overall quality of its films. The notables especially contributed in this regard – movies like Hereditary, Upgrade, and Crazy Rich Asians may not have been the most popular films upon their release, but are films that have gained a devoted fan base over time. Interestingly, 2018 also doesn’t have any significant flops. Solo is borderline between stud and dud, but I counted it as a “dud” because it failed to live up to expectations and likely lost money. Even then, it was far from the disaster certain media outlets wanted you to think it was.

At first glance, 2002 may not seem that impressive. But scroll down and then you’ll see why it ended up this high on our list. This year’s all about quantity, not as much about quality. 2002 has the most films released of any year on this list during the summer months. As such, it’s expected that there will be some duds, and indeed there are. Pluto Nash is one of the biggest box office bombs of all time. But let’s not dwell on that. Instead, let’s consider the franchises which released films this year; Star Wars, Spider-Man, Men in Black, Austin Powers, Jason Bourne, and Spy Kids. In addition, there’s a Spielberg film, a Christopher Nolan film, a good Shyamalan film, a well-received graphic novel adaptation, a loved Disney animated feature, and a healthy dose of hilarious comedies. If you were bored at the movies in the summer of 2002, you must have been dead.

In 1980, the idea of a summer blockbuster wasn’t really in full swing yet, but that didn’t stop a bunch of legendary films from being released. Watch out, you might start drooling. I’d say all but two of these films are among the best ever made in their respected genres. The only thing lacking here is quantity.

2017 might seem typical of most 2010 summer movie seasons – some well received hits, middling sequels, popular superhero movies, and some expensive missteps by studios. But 2017 actually ranks as the best summer movie season from the decade, and among the best ever because of the quality and quantity of films released. Plus, it has several films that transcend the typical summer movie stigma. Movies like Dunkirk, It, War for the Planet of the Apes, Baby Driver, Detroit, and Wind River didn’t just have box office aspirations, these were summer movies that could (and did) win Oscars. It also helps that there were relatively few misses this year, and most of the hits made a TON of money in theaters.

The birth of the Indiana Jones franchise. Do I need to say anything else? How about the release of three epic cult films? A formidable comic book film? What about Bill Murray? Are you convinced now? Movies from summer 1981 were awesome.

1989 gave audiences a lot of choices and for the most part, didn’t disappoint. With only 2 duds and 11 hits, it has one of the highest ratios of hits vs. misses. It features a number of films from several well-loved franchises (Batman, Indiana Jones, Ghostbusters, Lethal Weapon, James Bond, Honey I Shrunk the Kids) and features three very well-received stand alone movies (When Harry Met Sally, Parenthood, and Dead Poet’s Society). On top of this, it had a wide range or variety; action, adventure, science fiction, comedy, family, drama, and even a bit of horror. Sure, it had two duds, but those don’t really count against it in the long run. For one, the only duds in 1989 were two types of films that usually do not bomb; James Bond films and James Cameron films. Two, they’re very entertaining films and they have good ratings (excellent summer movies).

The summer of 1984 was as close to perfect as we’re probably going to get. Above all, it was a summer of films that were fun to watch. Temple of Doom may not be the best Indiana Jones film, but it is as entertaining as they come. Ghostbusters is a legendary good time, as is Gremlins, and The Karate Kid was an inspirational film that audiences couldn’t help but enjoy. Not only were the films of the summer of 1984 fun to watch, but they were well received by critics and audiences alike. All of the hits have a rating above 70% (and the average score of this year’s summer films is the highest of any year by a wide margin). Even the only dud of the season had a high rating. In fact, the only avoidable film in the whole summer season was Conan the Destroyer, but even that one has some watchability due to the fact that it stars Arnold Schwarzenegger. No other summer can touch 1984’s combination of fun, well-received and profitable collection of films. 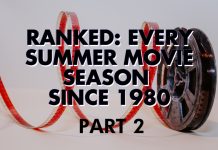