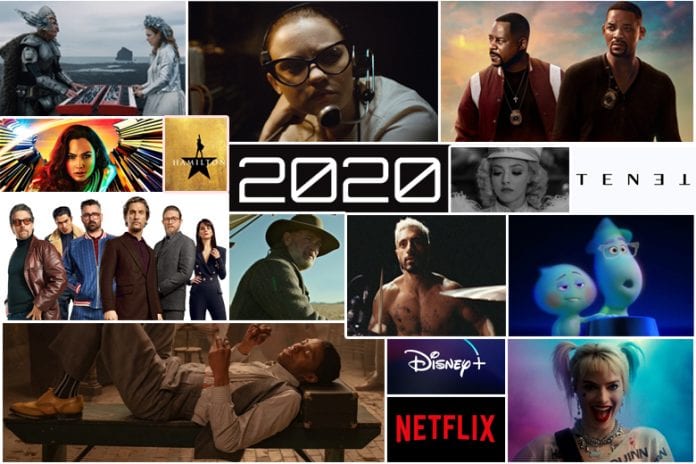 A recap of the 2020 year in film, which has been filled with many challenges and changes. How will this year in film be remembered?

How many times did you go to the movie theater in 2020? If you are like most of us, you can probably count your excursions to the theater with the fingers on one hand. Maybe that is typical for you, but for many of us, it is not. Among other things, the pandemic and its economic impact have certainly impacted our relationship with film. Whether or not our relationship has been impacted in a positive or negative way remains to be seen.

On the positive side, a year without major film releases has shined a spotlight on smaller films. Relegated to our couches, people found new movies to watch which they may not have otherwise chosen to watch. Movies like Hillbilly Elegy, The Trial of the Chicago 7, and The King of Staten Island may have garnered more attention and views than if they had been released in prior years. With Oscar season ramping up, I am also curious to see if Oscar hopeful films get more interest than they had in the past because some of them will be more readily accessible to mainstream audiences courtesy of streaming services compared to years prior.

Speaking of streaming services, they are the big winner of the 2020 Pandemic-fueled movie debacle. Rather than going out to the movies, we spent more time at home watching them. More than any year prior, studios utilized streaming services to release new films. Although we don’t know if this is economically feasible for the larger film releases, it is at least a way for fans to see major movie releases when the theater is not available to them. More than just an opportunity for major film studios, this has also been a boon for streaming services like Netflix and Amazon who are releasing their own films.

But with the opportunity to stream new feature films on various electronic devices, it means a disadvantage for traditional brick-and-mortar movie theaters. Like many other businesses who have been negatively impacted by the pandemic lockdowns, movie theaters are struggling to survive. With major studios’ decisions to hold off on releasing major films into theaters this year, many have shut down temporarily or permanently. This is certainly a big blow to the movie industry as a whole.

Hopefully it will mean changes to the theater-experience in order to entice people back out to the movies when it is safe to do so again. The theater situation is just one of many aspects of the film industry which has been forced to make major changes because of what has happened this year. Not only has the pandemic restricted the release of major films, but it has also restricted the production of them. Many major productions were shut down during the pandemic, or were otherwise delayed in some way. The impact of these delays in film production have yet to be seen, but could result in more releases getting pushed back to later dates.

Before the pandemic reared its ugly head, 2020 was off to an unusually good start in terms of its films. January, which is usually a poor month for the release of good films, was actually one of the best months of 2020 for film. While audiences and critics remain split over Underwater, it nonetheless seems to get more and more appreciated as time goes on. We saw the wide release of the Academy Award-winning 1917, and the release of 2020’s highest-grossing film Bad Boys for Life. In addition, we got a return-to-form from Guy Ritchie in The Gentlemen, and the stylish horror film Gretel & Hansel. Sure, there were some pretty terrible movies in there as well, but the good films strongly outweighed the bad, which is something that would not really happen the rest of the year.

February 2020 saw the release of some mildly anticipated films which failed to live up to expectations. Blumhouses’ Fantasy Island failed to reach the high bar set by the production company’s best work from the year prior, while Call of the Wild starring Harrison Ford and an unconvincing CGI dog was quickly forgotten. Sonic The Hedgehog did find some success at the box office, but its mediocre reviews suggest that the film’s delays in post-production did not necessarily improve it. Birds of Prey was decently received, but wasn’t a huge hit and audiences still seem divided. February’s best new release was The Invisible Man, and it did see the wide release of the acclaimed Portrait of a Lady on Fire. The Color Out of Space was another notable release.

March was the last normal month of 2020 before the pandemic struck, resulting in a shutdown going into effect in most places around March 20th. But even if it was the last chance for regular releases in theaters, studios did not make the most of it. Pixar, which is usually a sure-thing for great films, released Onward. However, this film was not as well received as previous Pixar releases and is considered one of the worst films in the studio’s portfolio. Bloodsport, and Spenser Confidential, were both action movies with big-name stars that didn’t make much of an impact. The Hunt was somewhat eagerly anticipated, but failed to live up to expectations. However, movies like Emma and The Way Back were well received and would have probably been more widely appreciated if theaters could have stayed open longer.

April, May, June, July – the major months for summer blockbusters passed with hardly a new major film releasing into theaters. There were smaller releases, or else notable releases of films to streaming services. In May we saw The Lovebirds, The Vast of Night, and Promising Young Woman. In June we watched Eurovision Song Contest: The Story of Fire Saga on Netflix, and Artemis Fowl on Disney Plus – the latter being a big disappointment given the source material and the talent involved. By late July we saw a big surge of new films released to streaming services. The highlights include Relic, AVA, Hamilton, Palm Springs, Greenland, The King of Staten Island, Greyhound, and The Old Guard. Some of these films were better than others.

Finally in August we saw the release of the year’s first big summer blockbuster into theaters, Tenet. Tenet is an interesting microcosm of the film year that is 2020 because of its controversy. If you look at all of the big-budget highly anticipated releases of the year, they all have some element of controversy related to them. With Tenet, the controversy was the decision to release the film into theaters only. There was also some discussion as to the film’s sound quality and whether or not it is actually any good. Similar uncertainty of the film’s creative quality surrounds Birds of Prey, The Witches, Artemis Fowl, Wonder Woman 1984, Bill and Ted Face the Music, Borat Subsequent Moviefilm, and The New Mutants. Similarly, the production decisions of Disney’s live-action Mulan has caused that film to see its fair share of controversy as well.

But for as many films which were released in 2020 that audiences can’t really come to a consensus on, there are those which really struck a chord. Movies like Spike Lee’s Da 5 Bloods, The Sound of Metal, Ma Rainey’s Black Bottom, The Trial of the Chicago 7, Enola Holmes, and Pixar’s Soul all had high expectations and met them. In fact, Pixar’s Soul seems to be the only major release which has had mostly very positive responses from audiences and critics. This is in stark contrast to other years where it seems like we always get at least a handful of major releases which audiences can mostly agree on. 2020 has been a different story.

Later in the year we saw some mid-size and smaller films released to streaming services which audiences seemed to enjoy. Love and Monsters was originally planned to release in 2021 in theaters, but Paramount Pictures released it to VOD in October instead, where it has been well received. Likewise, movies like The Wolf of Snow Hollow, The Trial of the Chicago 7, On the Rocks and Possessor fared well. In November, highlights included Freaky, Ammonite, Jingle Jangle, The Croods: A New Age, Black Beauty, and The Christmas Chronicles 2. Finally, in December, we saw a whole slew of releases of notable films such as Mank, The Prom, Safety, The Father, Ma Rainey’s Black Bottom, The Midnight Sky, News of the World, One Night in Miami, Wonder Woman 1984, and Monster Hunter.

But in addition to the movies we knew were coming, there were a lot of smaller scale movies which may not have had the benefit of high expectations, yet still blew us away. These movies found new audiences courtesy of streaming services. Some of them came to distribution thanks to their performances on the film festival circuits, which this year did not always happen in person. Movies like Never Rarely Sometimes Always, Nomandland, The Forty-Year-Old-Version, and Minari were award winners at major film festivals and could be competing for major awards at the Oscars and Golden Globes. Other films such as First Cow, Bacurau, Wolfwalkers, Beanpole, Saint Frances, and Another Round have made the best film lists of prominent critics. Steve McQueen’s collection of short films, Small Axe, has also made a very favorable impression on audiences and critics.

Looking back over the films which have been released this year, it is evident that it may very well be the smaller films which will define this year over the larger ones. It is true to say that the selection of large-budgeted films was much much lower than in years past, but that doesn’t take away from the breadth and depth which the smaller films have offered us. Plus, it is important to consider that these smaller films were the ones which people actually watched. I’m sure that they got more attention this year than they might have in years prior simply because the competition was less. However, that does not take away from their accomplishments.

With so many interesting and entertaining films to be released this year, I think it will take us some time to determine which ones will be best remembered. Unlike in previous years there aren’t really any films which stand out above the rest. We each have our favorites, but it seems like this year is more difficult than others for getting a group consensus on what was best, or what represented the year in film the best. As terrible as 2020 has been, at least we will be able to look back at the films released this year and have some good memories and inspirations to draw from.