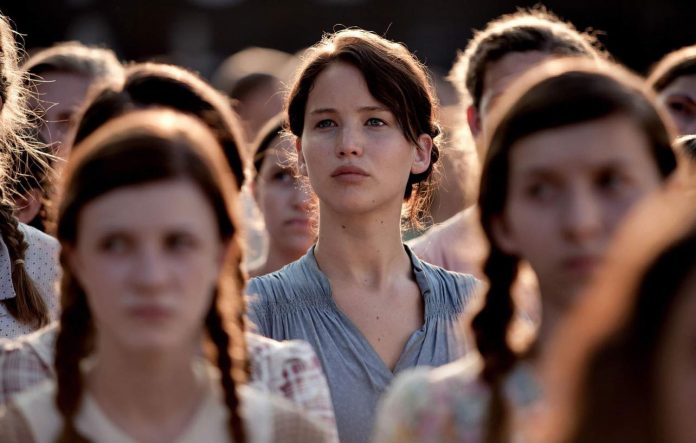 10 years ago, The Hunger Games, a relatively low-budget, unsuspecting film based on a YA book released to cinemas worldwide, and in doing so launched cinema into a new era.

It’s surreal for me to think about the fact that The Hunger Games has reached its 10 year anniversary already! It doesn’t feel all that long ago I hesitantly agreed to go and see a film where the characters fight to the death, only to fall head over heels for the series.

The Hunger Games was my first “thing.” It was the first franchise I ever got into and it was the gateway into the rest of geek culture which I’m so wrapped up in today. It’s hard to imagine what my interests would be now if I never agreed to go and see The Hunger Games. I feel like I’d be a totally different person.

As a teenager, I could have recited most of the first film, I could name you every district and what they provided for The Capitol, the names of all the actors, and yes, I did have Josh Hutcherson posters plastered all around my room! I spent ages watching extra features and interviews from the cast. One of my favorites was Donald Sutherland’s letter to Gary Ross, the director of the first film, about how he viewed Snow, what was important to him, and how he interacted with Katniss.

Sutherland had a lot to do with President Snow’s portrayal, particularly in the first film where many of the memorable, characterizing scenes of Snow was not in the books. If you haven’t read the letter, I’d definitely recommend giving it a read. It’s brilliant to see how much Sutherland cared about adapting Snow on screen.

The Hunger Games got me into the dystopian genre, I went to see Divergent and The Maze Runner, I read all of the books for all of these franchises and loved them all. The Hunger Games was the first film franchise I’d ever gotten into, I’d never excitedly waited for a sequel film or kept up to date with news, set photos, trailers, etc…

Much to my parent’s dismay, I stayed up until 3 AM multiple school nights just to watch the trailers as they released (I wouldn’t recommend it!). Even now, I still cry my eyes out at the end of Mockingjay – Part 2 as Katniss and Peeta visit a dandelion-filled field with their children. You can imagine my reaction when The Ballad of Songbirds and Snakes was announced!

It’s success, however, wasn’t a foregone conclusion. Even as young adult book adaptations like Harry Potter and Twighlight had found success, the more dystopian (and heavy themed) material was something of a risk. The result, however, was a dramatic shift for the industry that still hasn’t been replicated…

The Hunger Games is based on the YA novel of the same name, written by Suzanne Collins and released in 2008. The book spent 100 consecutive weeks on The New York Times Best Seller list starting from November 2008 and had sold 17.5 million copies at the time of the film adaptation’s release.

Despite the incredible success the book had enjoyed, The Hunger Games film was given a relatively small budget of $78 million. Compared to other films releasing the same year with a similar target audience, including The Amazing Spider-Man which had a budget of $230 million, and The Avengers with a budget of $220 million, The Hunger Games’ significantly smaller budget meant that its box office success far exceeded expectations.

The film ultimately brought in $694.4 million globally and broke records whilst it enjoyed a successful cinema run. The film set opening-day records for a non-sequel and had the third-highest opening weekend for the year, only being succeeded by The Avengers and The Dark Knight Rises. The film’s success continued for several weeks, becoming the first film since Avatar to top the North American box office for four weeks consecutively.

The Impact On Cinema

The impact The Hunger Games had was significant and marked the beginning of a new era of cinema. The film’s surprising box office success secured its sequel The Hunger Games: Catching Fire with a larger budget of around $140 million and thee newer director, Francis Lawrence, who went on to direct the rest of the franchise.

Coming of age adventure films weren’t anything new, but The Hunger Games marked the beginning of an era of young adult dystopian novels being adapted to film. The success of The Hunger Games gave studios more confidence in similar projects such as Divergent and The Maze Runner.

Despite having strong casts, compelling stories, and a built-in fanbase these other dystopian films struggled to replicate the same success The Hunger Games enjoyed, even throughout the franchise’s sequels! The Hunger Games had fairly consistent earnings across all four films, but other notable entries in the genre failed to match even the lowest earner (The Hunger Games: Mockingjay – Part 2) which made $658.3 million globally.

Much to the disappointment of many fans, the final film in the Divergent franchise, Ascendant, was changed to be straight to TV movie due to the diminishing nature of the franchise. But even that was later canceled!

The Maze Runner series saw more success than Divergent in the box office (and the ability to finish its story), thanks to its lower budget and higher returns. The problem, however, is how drastically the films began straying from the books, turning fans away by the final film’s launch…

The Impact On Fans

Fans of the franchise not only ensured the film’s box office success but also wanted merchandise. Big brands such as Barbie and Funko teamed up with Lionsgate to collaborate on merchandise; reprints of the novel were made with the film’s covers; and pins similar to Katniss’ Mockingjay Pin were mass-produced to keep up with demand.

Why Was The Hunger Games So Successful?

Given the struggles similar franchises faced, it’s fair to ask the question “What set The Hunger Games apart?”

It’s difficult to pinpoint exactly what made The Hunger Games such a phenomenon. One reason for its success may be contributed to the main character, Katniss. Katniss is an intelligent, capable young woman who flips the regular narrative of a damsel in distress on its head. Often it is Katniss saving either Peeta or Gale, and during her times in the games, Katniss is the one who knows what she’s doing while Peeta is out of his element.

Although love triangle between Katniss, Peeta, and Gale is a prominent part of the books, much of Katniss’ focus is on keeping her loved ones safe, and these emotions are often reflected in her actions. While her ultimate goal is survival, she is also a very selfless heroine, and this propensity for sacrifice drives the franchise forward at every turn.

Katniss volunteers for Prim, does her best to keep Rue safe, and risks her own life to get medicine for Peeta during the games. Later she puts herself in harm’s way to prevent Thread (the head Peacekeeper in Catching Fire) from further hurting Gale, tries to get Peeta out of the 75th games alive at cost to her own life, and the list continues throughout all of the films.

Part of what makes Katniss such an interesting character to watch isn’t just how capable she is in the games though. Strong and smart, Katniss is also deeply flawed and at times very narrow-minded. This is something that both the films and the books explore a lot, often highlighting how Katniss struggles to see things from other people’s perspectives.

Both Prim and Haymitch often act as vital insight for Katniss throughout the franchise. Prim plays an important role in helping Katniss acknowledge how powerful she is, and how she can actually help people instead of allowing things to continue as they are. Haymitch on the other hand often acts as a reality check for Katniss, particularly when it comes to her relationships with others. The focus on Katniss’ strengths and flaws, as well as not shying away from showing a range of emotions, makes Katniss’ character feel more realistic, especially for a person living through what she’s going through.

The Hunger Games also benefited from the general timing of it’s release. It hit smack in the middle of The Twilight Saga‘s two-part finale (Breaking Dawn – Part 1 released in 2011 and Breaking Dawn – Part 2 in 2013). With Twilight wrapping up, fans were looking for something new to jump into, and The Hunger Games was a perfect fit; filling the gap between the two final installments and promising more down the road.

The Hunger Games also deals with a lot of important themes (poverty, PTSD, grief, amongst others) that continue to resonate a decade later. Between all of the sadness though, The Hunger Games also has plenty of moments of genuine warmth. Prim waving at Katniss as she returns from her first games, Katniss’ reaction to Peeta being brought back after he walked into the forcefield, Annie and Finnick’s reunion, etc…

The range of emotions all the characters go through makes the films more interesting to a broader audience outside the book fans. The moments of calm between the characters where they manage to make joy despite the issues they face manages to make films about war and rebellion still bring a smile to your face.

As The Hunger Games went on, the franchise added more and more acclaimed actors. With a strong lead cast consisting of Jennifer Lawrence, Josh Hutcherson, Liam Hemsworth, antagonist Donald Sutherland, and supporting characters played by Woody Harrelson and Elizabeth Banks, the films were already off to a fantastic start. By Catching Fire, notable names included Jeffrey Wright, Sam Clafflin, and the late Phillip Seymour Hoffman, and Julianne Moore joined the cast later on.

Whilst it’s difficult to say exactly why The Hunger Games exceeded expectations the way that it did, it’s clear to see there was something about the franchise that appealed to people. Now, 10 years on from its release, a prequel movie about President Snow based on The Ballad of Songbirds and Snakes, Suzanne Collins’ most recent release from 2020, is set to begin production in 2022 with hopes for a 2023 or 2024 release date.

Whilst my interest in films and books has expanded a lot since 2012, The Hunger Games will always have a special place in my heart. It’s crazy to look back at the impact it’s had, and how it manages to stay relevant/engaging to this day. With that, I think it’s time for a re-watch…