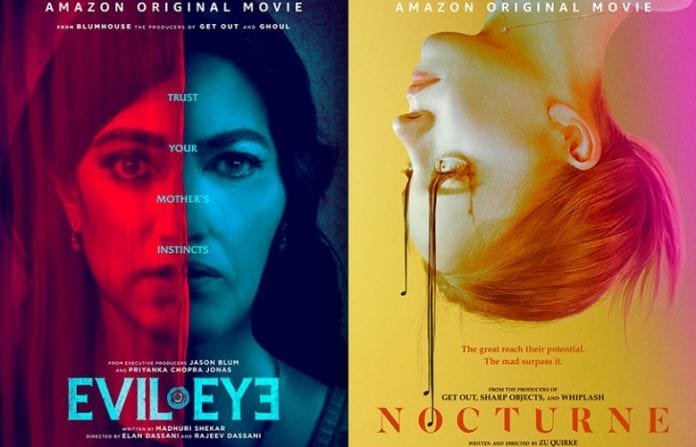 Amazon Prime dropped two more films today in the Welcome to the Blumhouse series: Evil Eye and Nocturne, but are they worth watching?

With the next pair of Welcome to the Blumhouse films dropping on Amazon Prime today, Carla and Jordan teamed up to give their thoughts on Evil Eye and Nocturne. While they’re very different films, they both seem to suffer from similar issues…. Evil Eye opens with several overseas phone calls from Usha, our superstitious meddling mother, to Pallavi which serve to get a real sense of their strong mother-daughter bond. Like most old fashioned mothers, she is worried about her daughter being almost thirty years old and still unmarried as if it makes her a spinster.  However, she takes it a step further and truly believes there is an actual curse on her daughter and makes her wear a bracelet with the evil eye symbol for protection.

When Pallavi tells her mother about a wonderful new man of hers, Sandeep (Omar Maskati), things begin to bear a striking resemblance to Usha’s dark past with a former flame that she had tried so hard to shield her from.  In fact, the more she learns the more she is convinced the demons of her past have come back to haunt them.

First of all, if you’re wanting to watch something that gives you a good scare, this isn’t the one for you.  However, that does not mean it is not worth the viewing time.  It is just less of a horror and more of a supernatural thriller steeped in the spiritual beliefs of reincarnation and birth charts which proved to be creative elements not really seen in American based productions.  However, even that aspect feels more eerie than scary as Pallavi’s boyfriend shows his true self after building tensions through most of the film.  To give more details on this part would mean spoilers coming to light so we will just leave it at that. As far as acting goes, I’ll bet you’re expecting me to say that veteran Sarita Choudbury (Lady in the Water) was the highlight of the film.  While she was very effective with her portrayal of the rightfully anxious mother, and Sunita Mani was on point with Pallavi as her rose colored glasses were put on and then forcibly removed, the real high point was Maskati’s portrayal of Sandeep.  He weaves through the scenes almost effortlessly bouncing back and forth from charming dream boat to dark and menacing depending on the characters involved and the situation.

One minor improvement I would have made to the film would be to add more elements of New Orleans.  During the scenes involving Usha you get a definite feel of Delhi; however, the scenes surrounding Pallavi have basic scenery at best.  The difference was distinct enough to support the claims that her parents had moved back to Delhi from the United States, but except for the scene outside the coffee shop the setting did not unequivocally back up the claim that she lived in New Orleans.

The thing that sticks out the most to me is that the plot takes forever to truly get to the point.  There were several moments of flashback memories of the villain that seemed out of focus and out of place meant to hint at the reason for the protagonist’s distress, and moments of her arguing with her husband about someone’s return, but the whole story is not revealed until the latter half soon followed by the villain’s big reveal of a personality switch.  Furthermore, if Sandeep is the reincarnation of such a dark, evil force, that fight scene was underwhelming and over too soon. Twin sisters Juliet (Sydney Sweeney) and Vivian (Madison Iseman) are both enrolled in a prestigious Arts school, and wouldn’t you know it…they both play Piano. Where Vivian shines and is seen as something of a prodigy, Juliet is constantly struggling to keep up. Beyond the musical talent, Juliet is also emotionally/socially awkward, where her sister moves easily through the ranks of typical High School hierarchy.

An upcoming academy showcase brings the sisters’ rivalry to a head, and Juliet finds herself willing to do just about anything to win. This is where the supernatural comes into play. Recently, the academy has been rocked by the suicide of Moria (Ji Eun Hwang), who’s talent was the top of the school. When Juliet finds Moria’s music notebook, scrawled with all manner of symbols/runes, she sees an opportunity to beat Vivian at the competition, with her own music.

Consumed with jealousy, Juliet finds herself seemingly possessed by the notebook and compelled to commit more devious acts in order to win. Between the in-fighting and drama of the sisters’ competition, it’s nearly impossible to ignore the Black Swan comparison and that’s where the film encounters problems. This is definitely not Black Swan. Sweeney does an excellent job playing the role of Juliet and shines brightest in the film’s quiet moments. Moments of contemplation where we can see Juliet struggling with the actions being taken and her desire to usurp her sister’s popularity/talent. Sadly, the film’s script doesn’t offer enough of these moments and instead doles out lines like “I’ve never owned a PlayStation!” in an attempt to explain Juliet’s personality rather than show it.

Nocturne has smatterings of very interesting ideas, but they feel like ideas I’ve seen done better in other films. The ultimate result is a movie that comes off schlocky rather than a thoughtful introspection on teenage pressures to perform.

And that’s not even mentioning the “horror” elements of the film. Sure, there’s the paranormal elements involving Satanic rituals and such, but they don’t feel like the driving force behind the story and leave little “thrills” to be found. There are some moments where the film could have leaned further into the creepiness, but it shies away from it instead, which robs those moments of any sense of tension.

While it’s nice to have some brand new films to enjoy, Evil and Nocturne had a hard time convincing us they were worthwhile. Light on the horror elements we were expecting, both films struggled with scripts their cast could take advantage of.