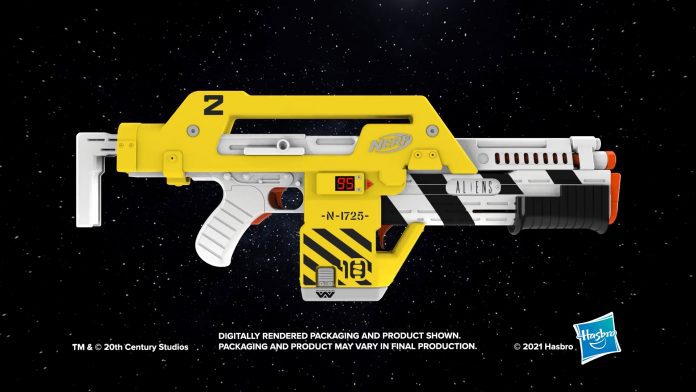 To celebrate the 35th Anniversary of Aliens this year, Nerf is releasing a new blaster that allows you to suit up like the iconic Colonial Marines.

Nerf knows how to push all the right buttons, and this LMTD Aliens M41A Pulse Blaster checks just about all the right boxes for fans and kids alike. You know, because kids love taking down Xenomorphs!

Celebrate the 35th anniversary of the iconic Aliens film with the Nerf LMTD Aliens M41A Pulse blaster, capturing authentic details inspired by the equipment of the United States Colonial Marine Corps. Imagine yourself travelling to LV-426 to battle waves of Xenomorphs from this legendary film. The Nerf LMTD Aliens M4A1 Pulse Blaster launches 2 different kinds of darts so you can adapt your battle strategy against the terrifying Xenomorphs.

Fast-blast 10 Elite darts in a row from this fully motorized blaster or launch a Nerf Mega dart with pump-action blasting. Keep an eye on the LCD counter to track how many darts are left in the clip, so you’ll know when it’s time to reload.

The LMTD Aliens M41A Pulse Blaster is now available for pre-order via GameStop and Hasbro Pulse in the US for $95. It’s set to arrive this October.