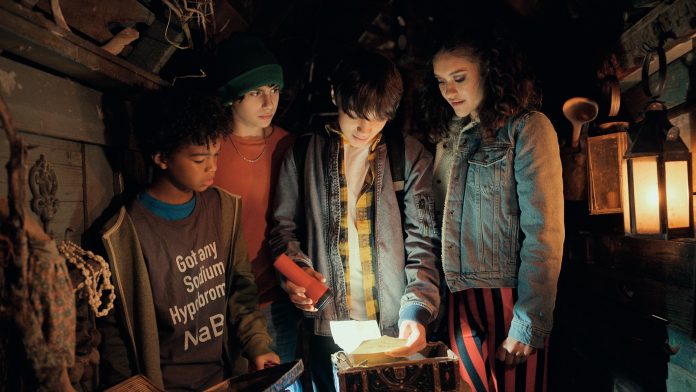 A new trailer for the upcoming Spirit Halloween movie has arrived along with a theatrical release date!

If you were hoping to see Spirit Halloween: The Movie in theaters (instead of just VOD later in October), then today brings some good news. The film will hit select theaters THIS month, on September 30th. To accompany the announcement, the studios have also revealed a new trailer for the film, showing off more of the cheesy good times…

SPIRIT HALLOWEEN: THE MOVIE tells the story of three middle school friends who spend the night locked inside a Spirit Halloween store, only to discover that the store is haunted. SPIRIT HALLOWEEN: THE MOVIE has the look and feel of the classic tween adventure films of the 80s as well as modern classics like “Goosebumps” and “Stranger Things”. The film features a wide range of iconic animatronics characters and set pieces created by Spirit Halloween. The production entered an overall partnership with the Spirit Halloween store during pre-production, with both parties collaborating on the film through the upcoming October release.

Spirit Halloween: The Movie hits limited theaters on September 30th, with a VOD launch on October 11, 2022.