What If…? has reached its final episode and it brings a multiverse of heroes together for a short, but thrilling, superhero team-up.

First it has to be mentioned: this was Chadwick Boseman’s last ever performance as T’Challa and it was as wonderful as ever. He clearly put his heart and soul into that role as he did every other one he played and it’s been a joy to get his performance one last time. He’s been an absolute stand out of the series and knowing it’s the last time we’ll see it for the first time is heartbreaking.

With two cliffhangers over the past week teasing Ultron’s conquest into other realities, we have arrived at that moment. The Watcher has broken his oath to only observe, and recruits the heroes we have met throughout the past eight weeks to forge them into the Guardians of the Multiverse. The montage of The Watcher bringing the various heroes was a pretty fun one that offered some minimal closure to the various cliffhangers the show has presented throughout the episodes.

Captain Carter has followed the same path as Steve Rogers in Captain America: The Winter Soldier, operating in SHIELD employment with Black Widow; stealth suit and all. T’Challa is facing off Ego’s intergalactic assault along with the Ravagers. Who knows if they’re gonna win but T’Challa does rob him of his “battery” in Peter Quill before being is whisked away by The Watcher.

Killmonger is in the midst of a battle-torn Wakanda with Pepper, Shuri, and the Dora Milaje on their way to take him down. Before they get the chance, however, he too is chosen.

Party Thor is battling the Ultron drones that have invaded his world, though the main Ultron is noticeably absent; perhaps arriving at each universe purely to send in his forces. Thor is having a blast fighting drones until an ignored and frustrated Watcher grabs him from his battle, resulting in a cartoonish but characteristically hilarious scream from the Thunder God.

Gamora’s appearance threw me off. I’d assumed she would be a survivor of the Ultron reality who took up Thanos’ armor after his death at the hands of Ultron, but she’s actually from a reality where Tony Stark went to Sakaar instead of Hulk.

We know this because of a What If…? LEGO set that you can currently purchase, however, the episode regarding this universe was delayed to Season 2. So neither character quite has the same punch as the heroes we’ve gotten to know through the series, but Gamora is a welcome inclusion nonetheless.

The characters meet in a magical inter-dimensional bar where The Watcher and Doctor Strange give them the breakdown of the threat. It’s a really exciting scene that gave me similar feelings as the first Avengers or Infinity War, where characters who have never interacted get to meet. This one had a particularly interesting edge to it though, with the idea that some of these characters know the others in their reality.

The Peggy/Nat and T’Challa/Killmonger, dynamics were particularly interesting to me; though the latter was not delved into as much. Peggy and Romanoff’s interactions and team up moments were a lot of fun and endearing to watch.

The action sequence had some highlights with those two. As a big Captain America fan I love a good shield throw, so when Black Widow and Captain Carter are relentlessly beating Ultron with their metal frisbees, I couldn’t help but grin.

T’Challa and Killmonger, like I said, had less time delved into their dynamic, but the few interactions they have are kind of heartbreaking. T’Challa isn’t aware of the dark deeds his cousin has committed and is likely just intrigued and excited by the idea of family he never knew he had. Killmonger, however, killed his world’s T’Challa and he shows no remorse in the face of a very much alive version of him.

At the predictable, but tense, turn at the end, Killmonger utilizes the Ultron head he’s been tinkering with to take the Infinity Stones for himself. T’Challa pleads with his cousin, but Killmonger simply dismisses their relation. It felt like a small aspect but it gripped me nonetheless.

An absolutely huge highlight, and quite frankly the MVP of the fight, was Doctor Strange Supreme. Infinity War gave an amazing and memorable action sequence with Thanos that truly established the power of the character along with the fun he can bring to a fight sequence for the viewer. What If…? has used that wonderfully.

Strange unleashes the dragons from within him, multiplies Thor’s hammer so they swarm Ultron in a terrifying horde, and his protection spells are the only thing keeping the characters alive through the episode. He’s such a fantastically uniquely powered individual in the MCU and just hammers home my excitement to see more of him next year.

The episode also gave us a brief revisit to the zombies of episode five, where they are dropped on Ultron as a distraction by Strange. Funnily enough, Thor instantly recognizes them and is familiar with the earth-based concept, so I guess zombies exist in his reality. Maybe we could see them in the main continuity sometime soon.

In that reappearance we get the return of a zombified Wanda who attacks Ultron with an onslaught of red energy. She then stops with a saddened expression, likely recognizing the face of her former partner. The moment gives Ultron the chance to dispatch the threat in planetary destruction, but it’s quite unsettling to see the zombies with some level of humanity.

In the comics they all remain fully conscious, retaining intelligence (abilities and all) just with an added insatiable hunger for flesh. The level of cognition is vague at best in What If…? but I’d like to see it explored through the lens of the MCU in the future.

At the core of this episode is Natasha Romanoff; the sole survivor of the universe that Ultron decimated and only true hope against him. Lake Bell has been killing it through this whole show, and her Black Widow is a wonderful blend of Scarlett Johannson’s portrayal with what we know from the comics. She embodies the character fantastically. I would love to get a hell of a lot more of her version of the character, and fingers crossed for a live-action appearance, the multiverse can do anything.

After the plan to use Gamora’s Infinity Crusher fails, it becomes clear the only way to defeat him is as originally planned with Arnim Zola’s digital consciousness safely stored in one of Hawkeye’s arrows.

After a fast-paced and tense moment as Captain Carter rushes to reveal Ultron’s face for Black Widow to hit her target, the arrow hits and Zola is uploaded to Ultron. It’s a quick defeat for Ultron only to be quickly replaced by an Infinity Stone wielding Killmonger and Zola, now displayed as an image in Ultron/Vision’s body, a big comic book reference to his classic look.

The battle reaches its conclusion when Doctor Strange encases the two, battling over the stones, in a pocket dimension similar to his own, accepting the responsibility to spend his days watching them and ensuring they are not freed.

When all is said and done Natasha won’t return to her world. It’s a dead universe with nothing to live for. In turn, The Watcher completes our revisits to previous episodes by placing her in the universe of episode three, where most of the Avengers were killed including her own counterpart. They find a Helicarrier in the midst of a battle between Nick Fury, the two Captains and Loki with his Asgardian forces.

Black Widow quickly dispatches the God of Mischief and uses his scepter against him to mind control him into ending the battle. A happy ending for this Nat, with a place in the multiverse where she can continue to be a hero. What follows is a brief wrap up of each other characters: T’Challa is in battle with Peter Quill using one of his guns, Gamora is posing dramatically with the Sakaarian Iron Man and Thor reunites with Jane Foster.

The Watcher narrates the end of the show and promises to protect the multiverse, his home. It’s a lot of fun for our narrator to be a character and have his own arc through the show. I’m really hoping we get to see a live-action appearance soon and that’s only partially because I love Jeffrey Wright.

As with all MCU projects, it wouldn’t be proper not to end with a post-credits scene. In true Marvel fashion we get a tease for what’s coming. Back with Captain Carter, Black Widow takes out Batroc and has to show Peggy something she found, the HYDRA Stomper, and someone’s inside, almost certainly Steve Rogers.

With the red paint job and the fact that this takes place on a SHIELD vessel when HYDRA has infiltrated SHIELD, I think it’s safe to say that we are going to be seeing What If Steve Rogers was the Winter Soldier? In the next season. It’s hard to say when that season may come but we know it is currently in development.

Overall this has been a fantastic show to me, likely my least favorite of the Marvel Disney+ stuff but that only speaks to the overall quality of all the shows being offered. It’s been a fantastic weekly watch and a blast to write about.

For now, we can look forward to more MCU fixes with Eternals on November 5th and Hawkeye on November 24th which I will be 100% writing about. Till then… well I’ll probably still write about Marvel. 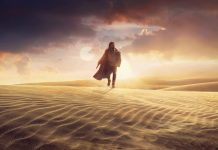