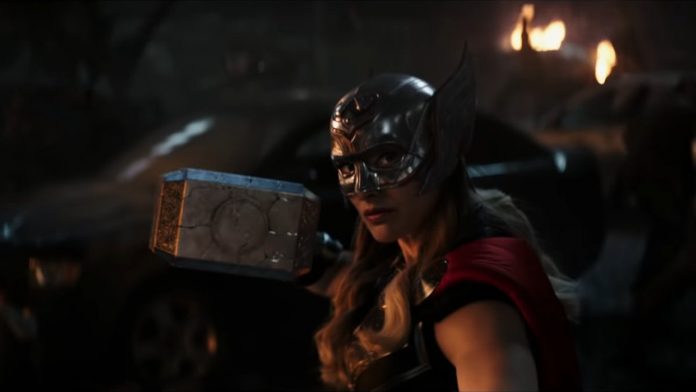 This morning brings our first official trailer, and poster, for Thor: Love and Thunder showing a new path for the hero and our first look at the MIGHTY THOR!

Though a tad later than most Marvel movie marketing, this morning brings our first look at Thor: Love and Thunder…

While it’s a quick teaser, mostly showing what the man has been up to since we last saw him leave with the Guardians of the Galaxy in Avengers Endgame. Even so, it’s great to get an idea of where his head is at right now. I like the idea of him wanting to slow down, be more peaceful and forge a different path.

While it’s a bummer we don’t get much else in terms of story (like the villain), but considering it ends with a great shot of Natalie Portman’s Might Thor (wielding a rebuilt Mjolnir), I’m pretty thrilled with what we’re seeing. Definitely a lot of fun potential here, and that’s not to mention this awesome poster:

The film finds Thor (Chris Hemsworth) on a journey unlike anything he’s ever faced – a quest for inner peace. But his retirement is interrupted by a galactic killer known as Gorr the God Butcher (Christian Bale), who seeks the extinction of the gods. To combat the threat, Thor enlists the help of King Valkyrie (Tessa Thompson), Korg (Taika Waititi) and ex-girlfriend Jane Foster (Natalie Portman), who – to Thor’s surprise – inexplicably wields his magical hammer, Mjolnir, as the Mighty Thor. Together, they embark upon a harrowing cosmic adventure to uncover the mystery of the God Butcher’s vengeance and stop him before it’s too late.