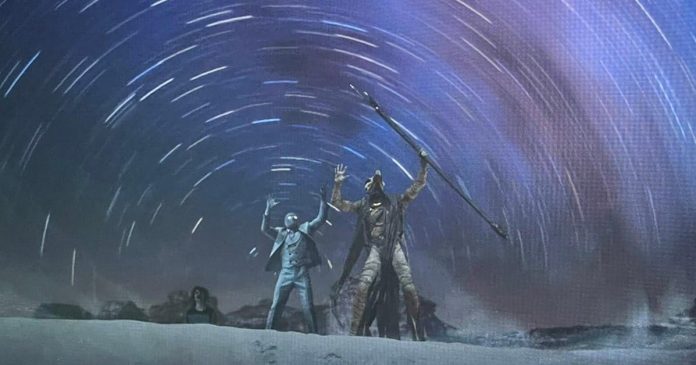 Moon Knight returns for its third episode with a refreshing shift; changing up our lead character while exploring new aspects of the Ancient Egyptian lore.

After two weeks with mild-mannered Steven Grant being thrust into a wild world of gods and his vigilante alterego, throwing the story into Cairo and putting Marc in the lead gave this latest episode an instant gripping aspect. We were in unfamiliar territory and getting to learn more about Marc Spector and his relationship with Layla, Khonshu, and Steven.

Marc’s drive to fulfill his mission is portrayed consistently well by Isaac. There’s a legitimate desperation that keeps him motivated to fight and kill whoever he needs to in his quest to stop Harrow. His banter with Khonshu is perhaps one of the most fun aspects of this episode, in particular. His exasperated attitude towards a literal God gives a great perspective on the relationship between the two.

May Calamawy gets a lot more to work with this episode as Layla’s past begins to be delved into. The show seems to be taking her story from Moon Knight’s original run; borrowing the backstory of Marlene Alraune (another Marc Spector/Steve Grant love interest). This backstory provided a lot more nuance to her character and conflict with Marc beyond his disappearance, their dysfunction becomes clear and the contrast of Marc’s care and coldness toward her gives an interesting look into both their characters.

The jump into the deep end of Egypt’s mythology and the Aeniad was great to see but I won’t lie; I would’ve preferred to see the actual god’s as opposed to their possessed avatars even if it did make sense for the story. Though it did give some brilliant Oscar Isaac moments as he bellowed Khonshu’s words in a ridiculously over the top performance that worked so well.

CGI continues to be the show’s weakest aspect. The CG shots are jarringly obvious but otherwise, it’s largely effective. The suit up/transformation aspect of the series is always cool to watch and the suit generally looks fantastic but the green screen can stick out sometimes.

Visually, this was the show’s strongest, with one of the most stunning sequences Marvel has shown to date in the sky-shifting scene that can only make you pity the poor citizens of the MCU. Egypt was allowed to exist without the usual piss filter that Black Adam seems to have fallen prey to. It was honestly very refreshing to see Egypt and Cairo portrayed as an actual city and not just dusty markets and desert. There’s a clear image of what the media portrays Egypt as and it’s nice that we got something beyond that.

Overall everything about this series is pretty fantastic, its weakest aspects are superficial but the story and characters continue to be captivating with Steven and Marc continuing to be some of Marvels’ most interesting heroes. Hints at a potential third personality will surely keep the series ever more intriguing and excite fans of the source material.