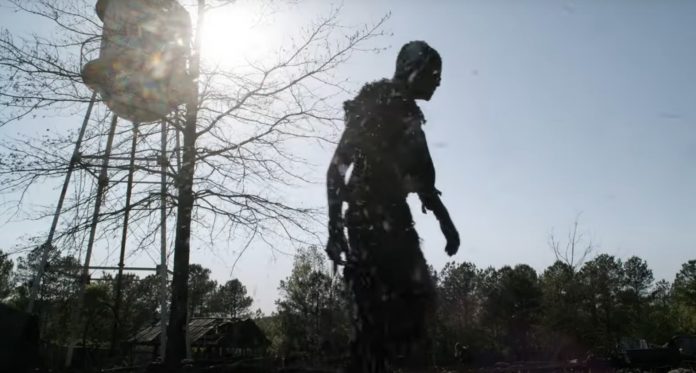 During [email protected] 2021 AMC brought new footage and details for all three of their shows based on The Walking Dead.

At the end of season 6, Teddy was able to detonate nuclear warheads across the Texas landscape. After the amazing season 6 finale, we find our survivors not only have to deal with any walkers that still roam the great state of Texas but now the nuclear fallout adds an extra bit of trouble to an already bad situation. Check out the two “first look”  trailers released for Season 7.

During the panel, we learn that cast member Alycia Debnam-Carey will make her directorial debut in Season 7. We also find out that, Sydney Lemmon will return as “Isabelle” and newcomer Gus Halper joins the cast as “Will” in Season 7.

Fear the Walking Dead Season 6 will be released on BluRay and DVD on August 21. Season 7 premieres Sunday, October 17 at 9pm ET/8c on AMC, with new episodes premiering early on AMC+ all season, followed by a new episode of Talking Dead later that evening.

THE WALKING DEAD: WORLD BEYOND

There were a few revelations about some of the things we can look forward to in season 2, but one thing we were told will not happen, no matter how much the fans want it. Rick Grimes will not make a surprise appearance in the 2nd season of World Beyond. Let’s jump into the first look video and see a little of what’s in store.

In Season 2 we see a few people move to series regulars, they are Jelani Alladin as “Will”, Natalie Gold as “Lila”, Joe Holt as “Leo” and Ted Sutherland as “Percy”.

Now if you know the walking dead comics, you’ll know that there are lots of characters that lived a long time or never died, & some who died that the series decided to make some changes with  – for example in the comics Carol never left the prison. In this final season we see that someone gets bitten (a major character?), Carol leaving to deal with something from her past, guys in white armor (commonwealth soldiers), Guy in red armor (Mercer, a commonwealth officer). The video jumps around a lot giving us bits and pieces of what will hopefully be a fantastic final season.

Newcomers to this season are Laila Robins as “Pamela Milton” and Josh Hamilton as “Lance Hornsby”. They will be joining  Michael James Shaw who will play Mercer, Margot Bingham, and Ritchie Coster whose names are currently being kept a secret. Season 11 will air in three 8-episode parts with 11A premiering on Sunday, August 22 at 9pm ET/8c on AMC, It will air one week early on AMC+, beginning August 15. Parts 11B and 11C will air sometime in 2022 to finish off the series. The Walking Dead Season 10 is currently available on BluRay and DVD.

If you missed out on them during SDCC at Home, you can check out the full panels via the links below: