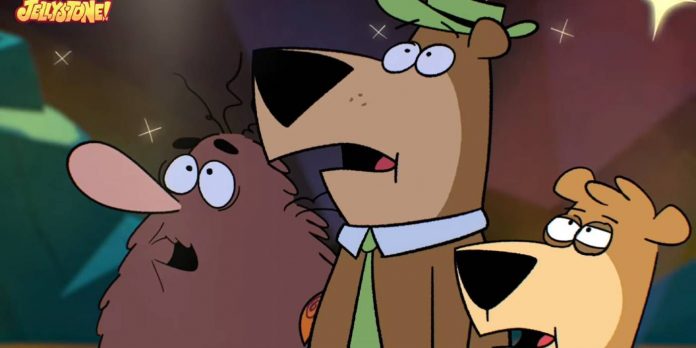 The SDCC at Home panel for the upcoming HBO Max reboot of the Hanna-Barbera cartoons, Jellystone, has us sold.

Today we got to take a look at the upcoming HBO Max TV show Jellystone during the [email protected] virtual Panel. The panel was moderated by Ramin Zahed (editor in chief of Animation magazine) and joining him on the panel are showrunner and executive producer C.H. Greenblatt, Ian Wasseluk (supervising director), Jeff Bergman (Yogi Bear), Grace Helbig (Cindy Bear), and Niccole Thurman (Jabberjaw) on a sneak-peek tour of this charming town where these beloved characters live, work and play together.

The first thing I noticed is that this isn’t just about Yogi Bear and Boo-Boo trying to steal pic-a-nic baskets in a national park. In the opening sequence I’m seeing all these Hanna-Barbera characters I grew up with marching through a town, Jellystone, and suddenly madness ensues. Huckleberry Hound, Jabberjaw, Top Cat, Doggy Daddy, Captain Caveman, Magilla Gorilla and so many more. Even though the characters involved go back as far as the 1950s, storylines and characters have been tweaked to fit into a show for the 2020s.

Let’s check out the panel below:

From the start, I really was not into this whole all-new Jellystone series, but after this panel, I’ve got to watch it. Even though it’s a more up-to-date derpy-kid show just the characters alone are tweaking that nostalgic part of my brain that remembers when I watched these cartoons as a kid eating PB&J sandwiches and drinking my “Chocky” milk.

Jellystone will revolve around the more wacky or cartoony characters of the Hanna-Barbera universe, but they will introduce their more serious characters and superheroes in the show as special guest stars. One we got to see was Johnny Quest and Hadji, other characters that were mentioned were Space Ghost, Mighty Mightor, Funky Phantom, & Blue Falcon. I will personally be keeping my fingers crossed for a cameo by the Herculoids or Dick Dastardly & Mutley.

Jellystone! is produced by Warner Bros. Animation and premieres July 29 on HBO Max.