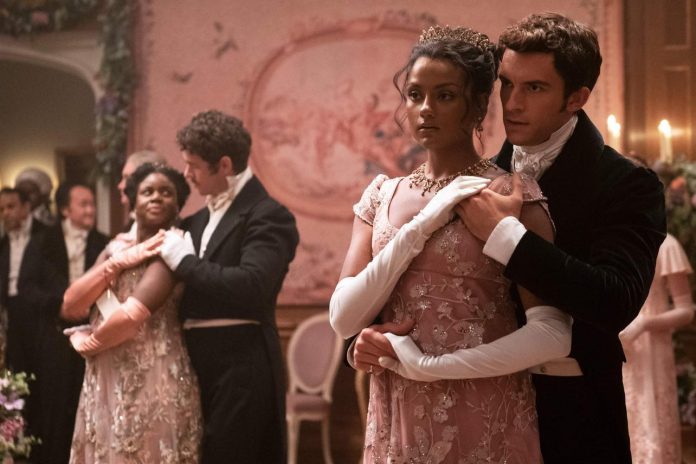 We take a look at the wild new season of Bridgerton on Netflix, breaking down the new characters/stories and how it stacks overall to the first season.

The second season of Bridgerton has finally landed and feels like it’s over all too soon (then again, that may be because I binged it in one sitting). This season was full of dramatic moments, longing looks, and some brand new scandals. But just like the characters, fans now must wait for the next season to see where the Bridgerton family winds up next.

**Spoiler Warning**
Before we go much further, be aware that we’ll be diving directly into spoiler territory on all things involved in this season. So if you’re not caught up just yet, maybe come back later.

The Story to this Point

The previous episodes of the show put the spotlight on Daphne Bridgerton, the eldest daughter of the family, enter her first season and be proclaimed the season’s diamond by Queen Charlotte. After struggling to find a suitable match, Daphne and the Duke of Hastings, Simon Basset, create a plan to pretend to be courting one another, making Daphne appear more desirable to potential suitors and allowing Simon to enjoy the season without other eligible ladies and their mother’s trying to secure a match with him. An unchaperoned kiss and a lot of disagreements later, Daphne and Simon end up marrying, eventually admitting to each other they have feelings for one another.

Season two picks up with Anthony Bridgerton, the eldest child of the family, entering with the intention of marrying and fulfilling his obligations to his family. Anthony has a strict checklist for his future bride and cares only about her being a good mother and viscountess, and not if he has any genuine feelings for her.

Meanwhile, a reluctant Eloise is also entering her first season. Whilst discussing his requirements with friends, Kate Sharma, the elder sister of this season’s diamond Edwina Sharma, overhears and warns Anthony away when he tries to pursue her sister. Despite this, Anthony continues his attempts to sway Edwina and whilst doing so grows closer to Kate.

Kate’s need for her sister to marry well so that her mother and sister will be taken care of by the Sheffields, her maternal grandparents, is in conflict with her overall opinions of the man. As such, she struggles with giving Anthony her blessing to marry Edwina. Although Kate is not biologically related to the Sheffields (and won’t benefit from their financial agreement), she still seeks to ensure her family is supported. As her own feelings for the viscount grow, the situation only becomes harder to handle.

On Edwina and Anthony’s wedding day, Kate and the viscount share a look whilst Anthony is supposed to be saying his vows. Edwina, now realizing that Anthony really cares for her sister and not her, flees the altar and calls off the wedding. Although initially angry with her sister, a riding accident that sees Kate in a life-threatening situation helps to bring the family back together, and later with Edwina’s blessing, Anthony and Kate finally get together.

Bridgerton Season 2: Worth The Watch?

When going into season two of Bridgerton I think it’s important to note that, whilst there are many similarities between the two seasons, there are also many differences. It makes for an enjoyable follow-up, but you shouldn’t go in expecting season two to be a re-work of the first season with different characters.

Season two swaps many of the raunchy scenes between couples for longing looks across a room, or passionate arguments resulting in heated will-they-won’t-they moments. Although Kate and Anthony do share a couple of steamy scenes, this season focuses much more on the build-up of their relationship as opposed to Daphne and Simon, who were married by the halfway mark in their season.

Kate and Anthony make for a thrilling watch and are fantastic leads. Actors Simone Ashley and Jonathan Bailey play the roles brilliantly and have many moments to showcase their acting talents throughout the season, juggling moments of warmth and joy with the familial obligations they both feel for their families, and the stresses that cause them.

Ashley manages to blend Kate’s wit and humor with her more serious, protective side to make a dynamic and intriguing character. In her vulnerable moments, it’s impossible not to feel bad for Kate as she struggles between what she feels is her familial duty and her own feelings. You find yourself willing for her to take her own feelings into account.

Bailey particularly shines in episode three, “A Bee in Your Bonnet”. This episode focuses heavily on the death of Edmund Bridgerton, the father of the Bridgerton children. Anthony, after spending the day hunting with his father, witnesses Edmund get stung by a bee and go into anaphylactic shock. A heavily pregnant Violet races outside after hearing Anthony’s cries for help, shortly followed by the rest of the children. Anthony, being the eldest of the family, is immediately thrust into the position of viscount and the head of the household.

Throughout a series of flashbacks, Anthony is shown desperately trying to look out for his family, handle funeral preparations, and take care of his siblings. In a rather harrowing scene, Anthony is called in when Violet is in labor with Hyacinth Bridgerton, the youngest of the children.

The doctor proceeds to inform Anthony the baby is breech and asks him to decide what to do, despite Violet’s objections. Anthony is unsure what the doctor is suggesting until Violet informs him that he is asking him to decide whether to save Violet or the unborn baby. Violet, obviously distressed, proceeds to say how only Edmund would have been able to make such a decision due to his love for her and the decision should not be Anthony’s.

Distraught, Anthony proceeds to tell the doctor to do whatever Violet wishes, despite the doctor’s protests. Later on, following the birth, a mourning Violet confides in Anthony that she wishes she had died during the birth so that she could have been with Edmund, and rejects his invitation to join the family for dinner.

Bailey does a brilliant job with this material and manages to capture the demeanor and expressions you’d expect of a young viscount trying to present himself as in the know in the face of dilemmas, but is also only a teenager, having to make decisions that impact his entire family whilst mourning the death of his father. Outside of flashbacks, Bailey appears to show genuine pain when speaking of Edmund in hindsight, making for a tearful scene towards the end of the season where he finally opens up and speaks to his youngest brother about their father.

Much of the supporting cast return and are as enjoyable to watch as before. Charithra Chandran as Edwina Sharma, Shelley Conn as Lady Mary Sharma, and Calam Lynch as Theo Sharpe, join the cast and work well with the already established characters. Each actor gets their moment to shine, most notably Chandran during what should have been Edwina’s wedding, who captures Edwina’s emotions during those tense scenes perfectly.

Eloise takes several issues with how Whistledown writes and the content she writes about, and in the next issue, these issues are resolved. When people speak about how Whistledown could possibly write about topics they weren’t already in the know about, Penelope will often give a knowing smile and gently disagree with them.

At times it felt as though Penelope was about to break the fourth wall, sit back in her chair, wink at the camera and say to the audience “I’m Lady Whistledown, remember?”. The plot lines created by Penelope trying to keep her identity hidden as she gets her work published were interesting additions. Penelope’s interactions with others, however, about the publication often made me wonder how Eloise (a very intelligent young woman) hadn’t begun to connect the dots until right at the end of the season. It felt as though Penelope had lost the subtlety that made last season’s reveal more shocking.

Last season Simon Basset actor, Regé-Jean Page, shot to stardom following his appearance as the Duke. Given his breakthrough into stardom and his number of upcoming films requiring his attention, it makes sense the decision was made to leave Simon out of season two. After all, the focus has shifted to a new Bridgerton child and their partner.

Whilst this move disappointed many fans, I was surprisingly not too concerned about this, but perhaps should have been. Daphne being the only Basset on-screen made sense much of the time, but there were moments where Simon’s absence was sorely felt; particularly at Anthony’s wedding. With Anthony being Simon’s old friend and brother-in-law, it felt difficult to believe he wouldn’t be present.

Thankfully, where there were issues, there was also plenty to keep the audience entertained. Eloise has a B-plot in season two that not only focuses on her quest to reveal Lady Whistledown’s identity, but also on her budding romance with new addition Theo Sharpe.

The show has taken several strides away from the source material throughout its episodes, particularly with regard to season two where much of the plot is original. For example, in the books, Kate and Anthony are wed in a similar fashion to Daphne and Simon, after they are caught with Anthony attempting to suck a bee sting out of Kate’s chest. The pair, therefore, end up in a relationship much sooner than in the show, and he and Edwina certainly don’t make it down the aisle.

I believe the show makes these changes for the best, and I believe the future of Eloise’s character will be no different. Theo isn’t a character in the books and in Eloise’s book ‘To Sir Philip, With Love‘, she ends up with Marina’s husband Philip Crane after Marina passes away. The introduction of Theo feels as though the Bridgerton show plans to shift Eloise’s story quite significantly, instead having her enter a relationship with somebody her family is likely to see as unsuitable due to their social standing.

Given Eloise’s hatred for the ton and her family’s insistence on her entering high society and getting married as she’s a woman, it makes a lot of sense that Eloise would fall for somebody outside of high society rather than one of the men of the ton who will expect her to only be a dutiful housewife.

Whilst season two of Bridgerton has some minor downfalls, on the whole, I found the season to be more enjoyable than the first. I liked the focus that many of the other characters got this season compared to the last, which was overwhelmingly focused on Daphne and Simon. Kate and Anthony feel like a well-suited match despite spending half of their screentime together outwitting each other, and themes such as grief, the impacts of keeping emotions bottled up, and other emotionally difficult topics are handled well and with thought, something I think season one missed the mark on a few times.