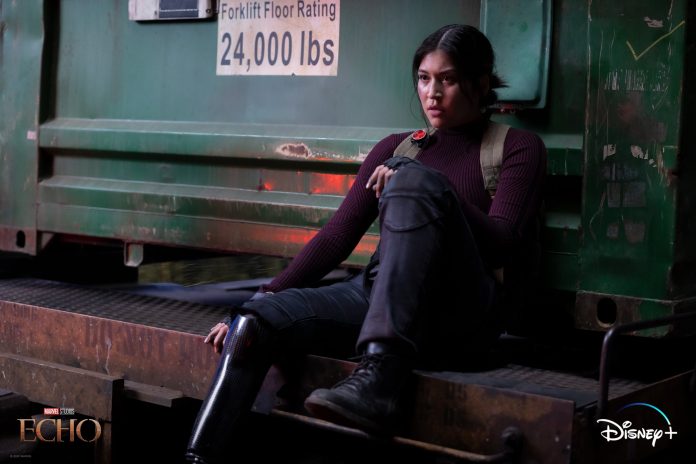 Marvel Studios have revealed the first look at Alaqua Cox in the Disney+ series, Echo. Read the official release info below:

Production is underway in Atlanta on Marvel Studios’ “Echo,” a series streaming exclusively on Disney+ in 2023. Alaqua Cox (“Hawkeye”) stars as the unforgiving Maya Lopez, who made her MCU debut in 2021 in Marvel Studios’ “Hawkeye” as a deaf gang leader who was determined to make Ronin aka Clint Barton pay for his own vengeful deeds.

Streaming exclusively on Disney+ in 2023, the origin story of Echo revisits Maya Lopez, whose ruthless behavior in New York City catches up with her in her hometown. She must face her past, reconnect with her Native American roots and embrace the meaning of family and community if she ever hopes to move forward.

Last we saw, Maya had a confrontation with Vincent D’Onofrio’s Kingpin as she held him at gunpoint and seemingly shot him, albeit off-screen. Speculation has been rife with suspicions of his return as similar storylines took place in the comics shortly after his apparent death at her hands.

Similarly, many fans hope for the return of Charlie Cox’s Daredevil in this series, Daredevil has heavy ties to Echo in the comics and he just made his major debut in the MCU with Spider-Man: No Way Home.

Echo starts streaming on Disney+ in 2023.