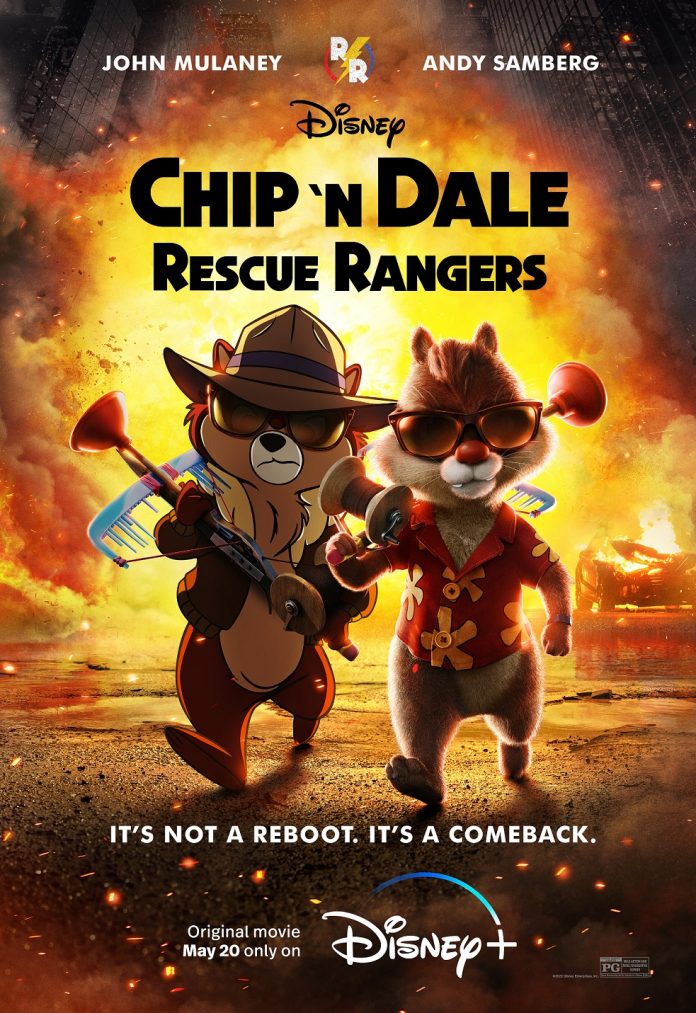 Disney’s iconic chipmunks return this week with a “reboot” 30 years in the making. Even without a big dose of nostalgia, Chip ‘n Dale: Rescue Rangers is more fun than expected.

Overall, I enjoyed the trailer for Chip ‘n Dale: Rescue Rangers, the new movie reboot (though it’s hard to call it that), hitting Disney Plus this week. It looked like some silly fun, but considering I was never big on the original 90s cartoon, it wasn’t exactly high on my list of movies to see.

Don’t get me wrong, I enjoyed the show, and pretty much all the Disney Saturday Morning line-up, but I never actually grew up with the Disney channel. I only ever watched it while at friends/relatives’ houses intermittently. So no, I didn’t go into this movie with a whole lot of nostalgic attachment, though I suspect long time fans will love it as well. Feel free to proceed, I won’t be spoiling anything in this review!

If you’ve seen the trailers, you have the basic gist of the overall story. Chip ‘n Dale picks up roughly 30 years after the original show ended. The thing is, however, we’re not dealing with the characters in the show and where they are now, but the actors. In this world, much like Roger Rabbit (a comparison I’ll be coming back to often), humans live alongside cartoons and even some puppets!

It’s no strange thing, it’s simply how this world has always been. It comes as a quick bit that happens so early and so fast, you never stop to question it. It’s highly effective, setting the tone for the story that unfolds. I loved this aspect, and it’s a type of world-building we don’t see enough of in movies anymore. All the “rules” for the world are established early, without any need for explanation or long exposition, then lets the story do the rest of the work.

Early on, we get to see how Chip and Dale meet in high school, only to follow their dreams to Hollywood where they became actors in bit parts before landing their very own show for Disney: Rescue Rangers. After finding big success, a schism came between the duo that caused the once inseparable friends to cut off all contact for almost 30 years…

When their old friend Monty calls them up, desperate for help, before suddenly going missing, Chip and Dale must find a way to set aside their animosity and work together. But of course, they’re not actual detectives like in their TV show and will require the help of a super fan-turned-detective (Kiki Layne) as they find themselves uncovering a sinister plot to kidnap iconic toons for nefarious purposes.

So yeah, it plays around with the classic tropes about stars having a falling out and finding a way to come together. And yes, there are many plot elements the feel taken straight out of Roger Rabbit (who shows up at one point!), but all of it feels lovingly handled. It’s not a straight rip-off, and takes familiar cliches and gives them a spin to make them feel fresh and funny in the new context.

I loved the approach they took with the story. There are so many reboots out in the world (which this movie does a great job poking fun at), that keep everything within the same universe. Don’t get me wrong, I love plenty of those (Scream, Jurassic World, etc), but it’s nice to see how they went with a more meta approach. That approach isn’t necessarily new either, but it’s expertly handled here and comes across as a loving homage rather than trying to be edgy.

The overall story isn’t exactly ground breaking. While it pokes fun at the tropes it uses, Rescue Rangers doesn’t necessarily veer away from them either. There are some “twists” but nothing too crazy, and you’ll see the ending coming a mile away. Coming in at a brisk 90 minutes, however, you aren’t given much time to dwell on such things and the fun factor smooths out the rest. The level of detail and care put into the film is evident, and it’s hard not to love it regardless of some predictable points.

Above all, however, Rescue Rangers is hilarious. Seriously, from the opening minutes all the way through the run time, it had me cracking up. There were even times I had to pause my screener because I was laughing so hard and didn’t want to miss something. Even doing so, I KNOW there are plenty of things I missed in my first watch.

That’s because the film’s humor comes not just from the script, but a host of gags going on in the backgrounds. Whether a billboard for a fake movie, funny interactions going on behind the main action, or even just a simple sign on a park bench, Rescue Rangers is LITTERED with a number of pop culture references that make for great gags. Some are blink and you miss it moments, while others hit you over the head with them. Either way, they make for a lot of fun, and ensures a return viewing will be just as memorable.

More than that sheer amount of references, however, I’m more impressed with how many of these jokes landed. Sure, there are a few moments where it feels like the film is throwing them at you fast and furious in an overt attempt to play on your nostalgia. On the whole, however, the jokes have a more natural flow that manages to endear you to these characters in new ways and keeps pulling you along till the end.

I’m genuinely shocked at some of the cameos/parodies they got away with in this film. Again, I won’t spoil them here, but I really enjoyed how the filmmakers didn’t limit themselves just to Disney properties. They poke fun at just about every major studio/brand out there in the same irreverent style as Roger Rabbit, and it works on so many levels. It has plenty of jokes that will appeal to older audiences watching, while feeding in plenty of sight gags for the younger kiddos to enjoy at the same time.