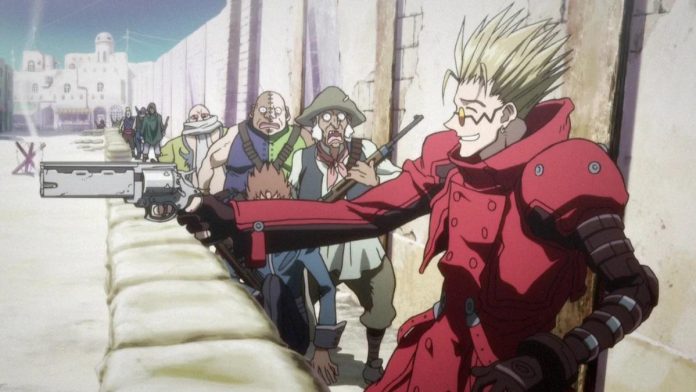 The first trailer for Trigun: Stampede was released at Anime Expo over the weekend and it heavily features Vash the Stampede.

While it hasn’t been that long since the existence of Trigun: Stampede was revealed to the world, we now have a trailer for the upcoming series as well.

A new trailer for the anime was released at Anime Expo and it highlights the series’ updated animation as well as the reworked design for Vash the Stampede which, while different, is still recognizable as the iconic anime character.

For those not familiar with Trigun, there’s a lengthy synopsis for Trigun: Stampede that sets the stage perfectly:

Vash the Stampede is a wanted man with a habit of turning entire towns into rubble. The price on his head is a fortune, and his path of destruction reaches across the arid wastelands of a desert planet. Unfortunately, most encounters with the spiky-haired gunslinger don’t end well for the bounty hunters who catch up with him; someone almost always gets hurt – and it’s never Vash. Oddly enough, for such an infamous fugitive, there’s no proof that he’s ever taken a life. In fact, he’s a pacifist with a doughnut obsession who’s more doofus than desperado. There’s a whole lot more to him than his reputation lets on – Vash the Stampede definitely ain’t your typical outlaw.

What do you think of the first trailer for Trigun: Stampede?