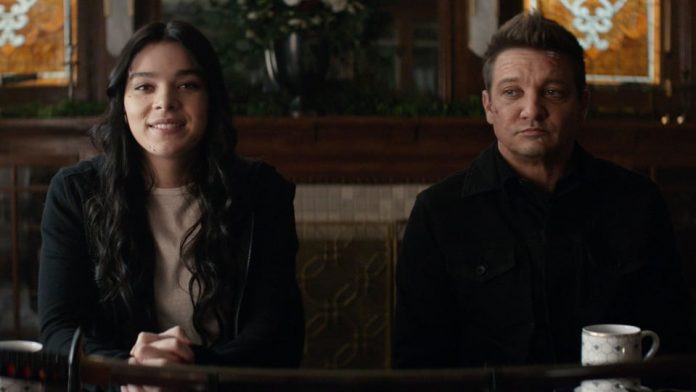 Hawkeye just keeps getting better and better, but with just a couple episodes left, will it be able to bring it all together? Let’s look at the latest episode.

Hawkeye Episode 4 delivers on action, emotion and probably has some of the show’s best sequences yet. But as more reveals come into play and more are yet to come, it raises concerns about a satisfying conclusion.

As has seemed to be the case with the majority of Marvel Disney+ projects, each episode seems like an improvement on the last. Hawkeye follows the trend. The latest episode developed Kate and Clint’s relationship really well. The transition from frustration to bonding over a Christmas tree was handled expertly and feels very organic to the show.

Their time together gives an excellent opportunity for further exploration into Clint’s character, which has been the show’s biggest asset after a decade of minimal development for the Avengers signature archer. As hinted at in the very first episode, Clint is still severely struggling with the loss of his best friend, Black Widow.

The episode gives us another telling of Budapest and the shot Clint never took when he was sent to eliminate Natasha. The biggest and most interesting part of Clint’s story through the MCU to a lot of fans was his friendship with Black Widow. Her loss having personal repercussions for him feels like an important character and world-building story in the MCU.

As with each episode, the somber and well-written development of Clint Barton goes hand in hand with some fun Christmas cheer that gives Hawkeye its unique feel among the countless Marvel projects. Kate and Lucky join Clint for some Christmas escapades in ugly sweaters, movie watching, and tree decorating that develops their relationship wonderfully. It also gives us a fun look at Clint’s abilities beyond archery: incredible accuracy. Kate quickly learns to mimic herself by turning the television off with small decorations. These abilities can often feel more in line with Bullseye, but it does feel like it gives even more reason for Clint to be an Avenger. His accuracy is a superpower and there’s no doubt after this episode.

The latter part of the episode has a tense action sequence that further solidifies Clint’s protectiveness over Kate, that clearly derives from the danger of superhero life that he has seen first hand. In an emotional parallel to Natasha’s sacrifice in Endgame, Kate is flung off the roof and left hanging. He refuses to help Kate up and instead drops her to the ground, refusing to put her in further danger. Despite her persistence in saving him, he still tries to put her down and get rid of her. I’m sure this will certainly come around to him accepting her as a fellow Hawkeye but, for now, a rift has been driven between the two Hawkeye’s and we will have to see how it might heal.

Yelena became a fan favorite after her appearance in the Scarlett Johannson solo flick, and Florence Pugh has established herself as iconic in the MCU; so her inclusion is a very exciting one. The lateness of her appearance in the episode, however, has brought up some potential concerns about the show going forward.

Four episodes in and with two episodes left, we have only just been introduced to what seems to be a significant antagonist in Yelena. Presumably, she’ll have an arc establishing her current state in the MCU and end with some form of redemption/forgiveness towards Clint. When you also consider the mystery watch, Echo’s conclusion, Jack, Eleanor, and almost certainly a Kingpin reveals, it feels like the writers may have bitten off more than they can chew leading to a rushed finale.

This was a great episode but it has raised some concerns, but hopefully they can pull it all together to bring a great conclusion to another MCU installment.