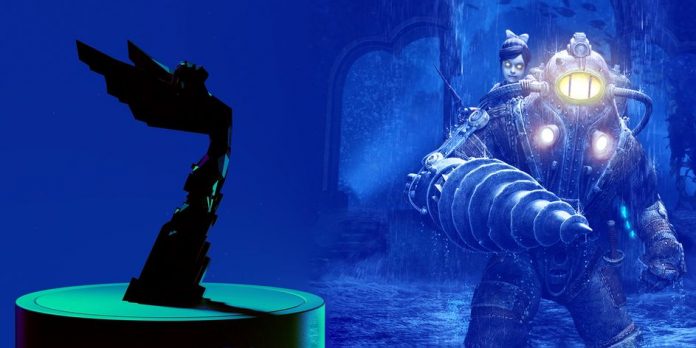 The Game Awards went from a pretty straightforward gaming show, to one of the biggest events for reveals rather quickly. One could even argue the balance between honoring the winners, and revealing new content, has been pretty blurred. But a lot of us do indeed tune in for the reveals and can’t help but be hyped for all the rumored releases at the show. Sadly, some of those rumors lead to nothing due to either false claims, or the simple fact that schedules change. So here are 5 rumors for TGA 2021 that didn’t come true.

There have been rumors swirling around the next Bioshock for some time now, but just before the Game Awards a major leak happened that revealed the location and environment of the next game. This obviously got us hype, but several leakers went on to state this meant their Game Awards announcement was confirmed. Yet the original leaker stated a couple weeks in advance that “the announcement may have been pushed to E3.” Guess we will reserve our excitement till June.

One leaker was pretty spot on with Hellblade making a return, but also went on to say Bioshock and Fable was coming also. Leading up to the show it seems the Bioshock team had a disagreement and delayed their reveal to Q1, you know….a magical PlayStation event is supposed to take place….

A few leakers had confirmed this game was going to be at TGA, but one in particular had everyone hype. Millie A had gotten Wolverine pretty spot on a few weeks in advance, and then went on to say the new Harry Potter game was set to be revealed either “this month or at the game awards,” the month being October. This was all pretty confirmed with TGA socials sending out floating candles leading up to the show, and several other leaks leading on to a confirmed trailer. Turns out WB still has yet to show anything, but the rumor is that the trailer got replaced with the teaser for Wonder Woman, and WB is being “careful” with J.K. Rowling backlash. The trailer is now apparently set to be revealed at an un-announced PlayStation Conference, the same PlayStation Conference we have heard rumors about since August. Does Sony even do conferences anymore?

While not directly confirmed for TGA, Splinter Cell has been long rumored to appear at every major event for years. We’ve gotten so close with E3 leaks before a sequel was cancelled, then this past E3 we got the rumors again only to be left with some odd Tom Clancy universe skin. Now the game is back at it again with disappointing open world news, but again leakers were saying that the first tease could very well be TGA. But again we are left with nothing in the Splinter Cell world.

This one was started on 4chan, so right away a bit iffy there, but some things have come true. This was an opportunity for a new leaker to gain some credibility, especially since other major leakers were stating Sony may be conservative at TGA due to the magical unannounced PlayStation event coming. Turns out we can write this one off, no hint of Sly Cooper at all. Sony was releasing some teases leading up to TGA which gave some hope, but in all it may have just been the studios celebrating the anniversary. Jak and Daxter and Ratchet and Clank were also doing similar motions.

The strongest rumor for TGA in my opinion seemed to be Fable making an appearance. Microsoft was having yet another good showing with a ton of new hard hitting games, and to me Fable was the icing on the cake. I personally think it was meant to be the final “wait, we have one more” trailer, but due to lack of timing the show had to abruptly end during the pinnacle GOTY award and move on.

On the other hand some people were leaking Fable was going to appear and show us the first gameplay or trailer. Which is plausible considering Microsoft had announced it, but had yet to show it off at 3 events now. A leak for it backtracked quickly at the start of the show saying it was “just a hope.”

The leakers were at odds with PlayStation. On one hand, the correct ones, it was stated PlayStation would be conservative at the awards and not reveal much of anything. According to them there is a PlayStation event coming, and I can’t stress this enough…. It’s been rumored for MONTHS. Turns out they were indeed right and Sony didn’t show basically anything, probably because they had nothing for Deathloop yet again. I mean a whole year of major events, Sony was basically absent at all of them. So of course any hint of a rumor for any of their studios will lead to major hype. The strongest rumor being that Sony’s version of GamePass (Which is just combining PS Now and PS Plus) would get a first teaser here, and nope. I think the PlayStation logo played a total of 1 time at the event.

Silent Hill, while the show all but confirmed Kojima was back again with Silent Hill, it didn’t show off anything and all of us fans have to eagerly await even longer… Though they did directly mention it 3 times.

Metal Gear, while not directly related to Kojima anymore, it was rumored the remastered titles would get some type of hint, but it turned out to be nothing more than fan theories.

Elder Scrolls and Starfield, I mean it’s Bethesda they do what they want and we all know it.

Spider–Man, with the new movie releasing it may have been smart on Sony’s part to release some type of content or new trailer for the game, but again they were non-existent for the most part.

Overall TGA was not that bad with reveals. We seem to get overhyped a bit because that is what Geoff does, he hypes his shows so you watch it, while being very vague on rumors and confirmations. However that Alan Wake II trailer, that was worth all the hype to me, and Hellblade looked pretty cool too (and sounded phenomenal with surround sound). What were some rumors for TGA that you heard that didn’t make the show?