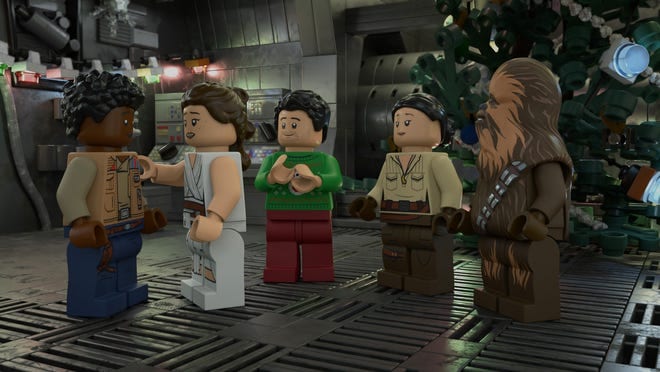 This November, Star Wars fans will be able to celebrate with a brand new Holiday special, with 45 minutes of LEGO goodness!

To celebrate the holiday season, Disney Plus is bringing fans something new with The Lego Star Wars Holiday Special! Our first look at the upcoming, 45-minute, one-off show comes thanks to USA Today, giving us a glimpse at how the story will play out, and the various LEGO incarnations of iconic characters we’ll see. “We wanted to give a wink and a nod to the original,” executive producer Josh Rimes says, adding the new 45-minute holiday special was inspired by “It’s a Wonderful Life,” “Planes, Trains and Automobiles,” “Christmas Vacation” and old Burl Ives musical cheer.

The Lego holiday special, which Rimes teases will feature a few “Star Wars” movie actors reprising their roles, catches up with the cast after the events of last year’s saga-closing “Star Wars: The Rise of Skywalker.” Rey and droid pal BB-8 head off on a quest to gain a deeper knowledge of the Force, but their visit to a mysterious Jedi Temple sends them careening through time and space. Rey interacts with Luke Skywalker, Darth Vader, Obi-Wan Kenobi, Yoda and other characters in some of the franchise’s most beloved moments, as they try to return in time for a Life Day feast with her friends on Chewbacca’s Wookiee home world of Kashyyyk.

Even though it’s in LEGO form, it’s pretty cool to be able to get some kind of story that takes places AFTER The Rise of Skywalker. LEGO Star Wars specials have always been a treat, delivering on humorous stories that appeal to all ages, while still feeling uniquely Star Wars.

The LEGO Star Wars Holiday Special will drop on Disney Plus on November 17th, so get your Life Day robes ready!