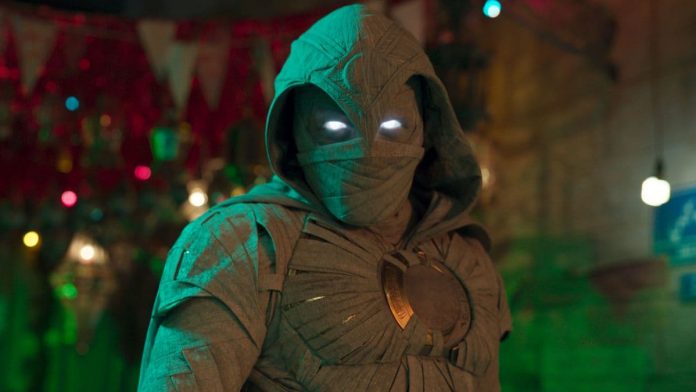 Moon Knight came to a dramatic conclusion in its shortest episode; yet managed to concisely pull together one of Marvel’s most creative projects on the Disney+ platform.

When the finale’s runtime of over 40 minutes was revealed, concerns arose regarding how well the finale could pull the whole show together and provide a satisfying conclusion. Multiple story threads were still up in the air as the penultimate episode brought major shifts in character development, but little story progression.

However, it was episode 5’s wonderfully emotional character exploration that set the stage for a fast-paced conclusion; making the most entertaining finale of any Disney+ Marvel series yet. The prompt saving of Steven when Marc rejects the field of reeds was a quick turnaround from last week’s cliffhanger but also a nice payoff to the two growing closer and accepting each other.

Oscar Isaac’s performance as the pair has been a highlight of the series, especially in the past two where we have got to see them opposite each other. This episode takes a different, but very satisfying, approach where they are both completely in tune, switching between each other with no blackouts and simply using each other’s skills to the relevant situation. It was an incredibly cathartic to watch Steven go from losing chunks of his life, to embracing Marc and seamlessly existing together.

Layla El Faouly stole the show as she becomes the Scarlet Scarab, avatar of Tawaret. It was something I didn’t know I needed, but absolutely need more of now. As a young Egyptian girl asks, “Are you an Egyptian superhero?” you can’t help but feel immensely happy for those represented when she replies “I am.” Hopefully, her time as the Scarab is less temporary than implied in the episode.

Harrow gets some depth in this episode that made him far more compelling than I previously found him to be in the series. Showing such commitment to his cause that he completely submits to whatever sentence Ammitt might give him. Despite all he has preached throughout the series, I anticipated typical villainous hypocrisy and was nicely subverted.

Speaking of Ammitt, for a talking crocodile lady the effects were fairly convincing. This series has been inconsistent with the quality of its effects but it is of the utmost importance when selling these type of characters. They nailed it in this case. We also got our first Kaiju fight in the MCU and I am 100% here for that and hope we do many, many more. Giant monsters fighting will always be entertaining and I was happy to see Marvel have their go at it.

The show’s score is continuously fantastic and crafts the whole atmosphere of the series, the show leaning away from the street vigilante aspect and more into the Egyptian mythology may have been controversial for some fans but has given this series a completely unique feel in the wider MCU. As this character evolves further it will be interesting to see how he begins to fit into this bustling world of other heroes.

The show also gave us our first look at the third alter, teased for weeks and now revealed in post-credits as Jake Lockley. A rather violent departure from his street smart cabby source material but an interesting contrast to the mild-mannered Steven and reluctantly violent Marc. Fears about the character being a one-off were put to bed here with a great cliffhanger and a dapper Khonshu.

This series was never without its faults, its effects have been shaky throughout and the villain won’t go down as one of Marvel’s strongest but the deep dive into Egyptian mythology and the fractured mind of the protagonist turned this into one of Marvel’s best stories yet. A wonderful unification of talented actors, directors, set designers and composers that brought to life a stunning story that introduce a truly unique Marvel hero.

Perhaps the show’s biggest strength, however, is its complete lack of reliance on the MCU as a whole. I counted perhaps three references in the entire series but they are so minimal I doubt the majority even caught them. The MCU is exciting for its interconnected and wide universe (now multiverse) but it shows the strength of the creatives and the confidence in their story to shy away from these connections when they have the options.

No doubt many of us are excited to see Moon Knight crossover with fellow Marvel heroes, but his debut shows that this character is more than strong enough to bring contained and brilliant stories to the screen.