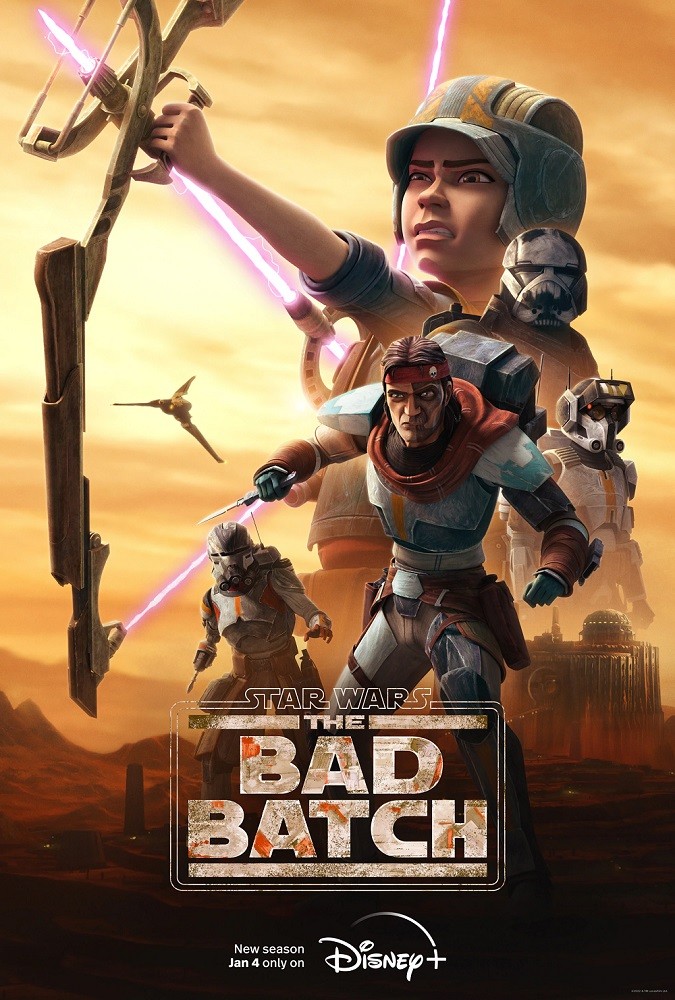 Start off the new year with a little Star Wars on Disney+ as season 2 of The Bad Batch comes to the streamer. we still have the ongoing shows National Treasure: Edge of History, & Willow (which ends its first season this month) to look forward to in the New Year. There will also be lots of other content from Disney on the service this month.

Check out all the listings below.

Star Wars: The Bad Batch – 2-Episode Season 2 Premiere – Episode 201 “Spoils of War” and Episode 202 “Ruins of War”
When the new season opens, months have passed since the events on Kamino, and the Bad Batch continue their journey navigating the Empire after the fall of the Republic. They will cross paths with friends and foes, both new and familiar, as they take on a variety of thrilling mercenary missions that will take them to unexpected and dangerous new places.

National Treasure: Edge of History – Episode 5 “Bad Romance”
Trust no one on a treasure hunt. Jess begins to wonder if this is true as she suspects someone close to her might’ve leaked an important clue to Billie, but she doesn’t want to believe it. While Tasha uses her tech skills to ferret out the mole, Jess realizes the key to the next step in the treasure hunt is locked in the Rare Books Room at the Governor’s mansion, leading Jess and her friends to plot a caper during the Governor’s Ball, where Jess’s trust in her friends will be tested.

Willow – Episode 7
An epic period fantasy series with a modern sensibility set in an enchanted land of breathtaking beauty, “Willow” features a diverse international cast with Jonathan Kasdan, Ron Howard, Wendy Mericle, Kathleen Kennedy, and Michelle Rejwan serving as executive producers. The story began with an aspiring magician from a Nelwyn village and an infant girl destined to unite the realms, who together helped destroy an evil queen and banish the forces of darkness. Now, in a magical world where brownies, sorcerers, trolls, and other mystical creatures flourish, the adventure continues, as an unlikely group of heroes set off on a dangerous quest to places far beyond their home, where they must face their inner demons and come together to save their world.

Chasing Waves – All Episodes Streaming
In the wake of surfing’s Olympic debut in Tokyo, “Chasing Waves” shines a spotlight on the people and places that are defining Japan’s reach in the global surf culture. This character-driven documentary series follows multicultural athletes in pursuit of their dreams, paints a captivating picture of Japanese life and showcases what it takes to succeed in the international surf industry.

Gina Yei – All Episodes Streaming
Gina, a cheerful and creative girl, has a dream to write songs. Thanks to her lyric-writing abilities, she gets the chance of a lifetime when she wins a scholarship to the prestigious Caribbean Music Institute (CMI) on the island of Puerto Rico. It’s the best place in the world to study Latin music and the birthplace of reggaeton.

National Treasure: Edge of History – Episode 6 “Frenemies”
Not knowing who’s good and who’s bad, Jess works with Billie and deciphers a hundreds-year-old clue that points to a famous 18th century landmark, and together they plan an impossible heist during an historic reenactment to retrieve the next piece of the treasure map. But things don’t go as planned, and Jess is ultimately faced with the most difficult decision of her life.

King Shakir Recycle – Premiere
Scientists trying to solve the environmental crisis of pollution devise a way to send the collected garbage into space via rocket ships. When this garbage starts to land on alien planets, the outraged aliens head to Earth for revenge. King Shakir and his family must do their best to protect the world from alien destruction.

National Treasure: Edge of History – Episode 7 “Point of No Return”
Jess sacrifices everything to confront her dad’s killer to find the last piece of the map. But that meeting rocks her world as she learns that nothing is what’s expected on a treasure hunt, propelling her to make a dangerous decision that could land her in prison for life.

Mila in the Multiverse – Premiere
Mila is 16 years old and living the adventure of her life traveling through the multiverse in search of her mother, Elis. As she travels, she will come face to face with The Operators, a mysterious and dangerous group that wants to exterminate all universes. She will have to face them in order to save the vast multiverse.

National Treasure: Edge of History – Episode 8 “Family Tree”
It’s a matter of life and death when Jess and her friends embark on their most impossible caper yet. Meanwhile, Liam teams up with his grandpa’s home care nurse, Myles, in a desperate attempt to bring down Billie and her secret organization before they harm Jess.