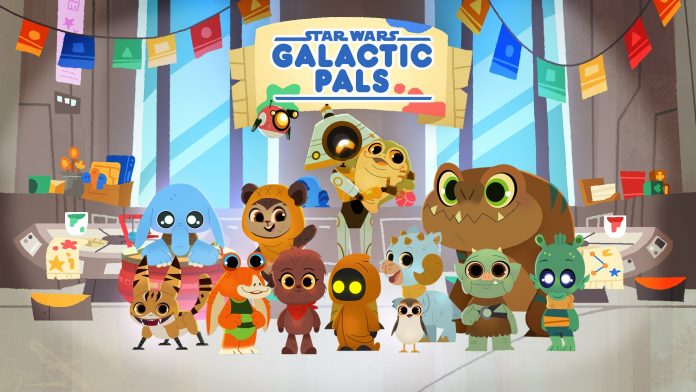 Lucasfilm has announced (and launched) a new animated micro-series, Galactic Pals, to teach kids/fans more about the diverse galaxy far, far away.

If Star Wars Galactic Pals seems somewhat familiar, that’s because it serves as a spin-off to Galaxy of Creatures which took viewers on a trip across the galaxy to meet various creatures. Now, that adorable style is branching out to include all the various alien younglings who inhabit the galaxy.

The first two episodes are available RIGHT NOW and can be viewed over on StarWarsKids, with another pair of episodes (12 in total) launching every Tuesday.

A spinoff of the Star Wars Galaxy of Creatures animated micro-short series that launched on Star Wars Kids in 2021, Star Wars Galactic Pals joins M1-RE (“Miree”), a member of the Galactic Society of Creature Enthusiasts, as she looks after and studies ornery Ortolans, fussy Hutts, scavenging Jawas, and more aboard the Youngling Care Space Station.

The Galactic Society of Creature Enthusiasts was founded during the exploration age of the High Republic by scientists interested in researching species found on the frontier worlds of the Republic. While some members like SF-R3 (“Aree”) travel the galaxy to catalog wild creatures, others like Miree study creatures and aliens living outside of their home planet’s habitat to identify common species behavior. By teaching the younglings in her care deep breathing techniques, how to express themselves through music, and the importance of maintaining bedtime routines, Miree helps each youngling realize their full potential.

What’s a Star Wars kids show without toys?! On top of revealing the animated shorts, Mattel has also launched a series of plush toys exclusively at Target to tie-into the show. These will be available in Target stores starting today.

“The Star Wars Galactic Pals series and plush assortment has been a true collaboration from start to finish between Lucasfilm and Mattel,” said Paul Southern, Senior Vice President, Franchise & Licensing, Lucasfilm, Disney Consumer Products, Games and Publishing. “As fans meet the array of young creatures and aliens within the Star Wars galaxy through this new series, they will be able to take on the role of caretaker with their own youngling from the new plush line as they learn, grow, and adventure together.”

The amount of cute on display here is almost too much to handle, but I’m definitely all for it. Now, gimme that cute Hutt plushie!