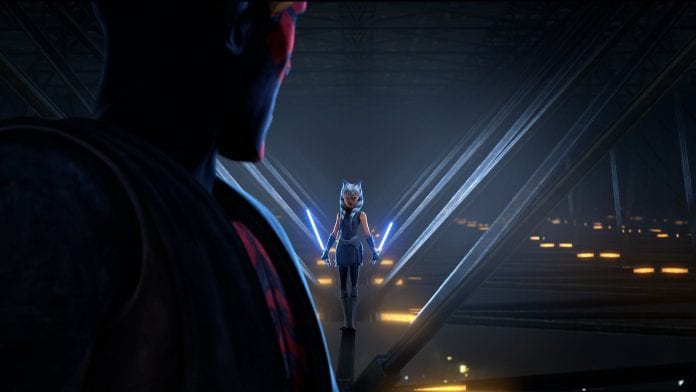 With The Clone Wars now over (again), I share my thoughts on the final episodes and how they’ve transcended all expectations.

For the second time, The Clone Wars animated series has come to an end; this time on its own terms. The final episode of the series debuted today (May the Fourth no less) on Disney Plus, bringing with it a sense of closure and longing. Let’s talk a little more about this final arc!

It’s honesty time (although a lot of people already know this)…I’ve never been the biggest fan of The Clone Wars animated series. Don’t get me wrong, I enjoyed the series and had plenty of fun with it, especially in the latter seasons. At the same time, however, it never fully hooked me in the way it did so many other fans. I mean, if I missed an episode when it aired, I wasn’t overly concerned or felt a desperate need to catch up as soon as possible (which is pretty normal for me when it comes to Star Wars things).

As such, I went into this final season of The Clone Wars interested to see what it would bring to the table though not exactly bursting at the seams for it. With the series now concluded, I have no hesitation saying this final arc is one of the best visual Star Wars experiences around.

Fair warning here, I will be talking some mild SPOILERS for the final, Siege of Mandalore, episodes. Though I will avoid anything major in the final episode, some of it will be hard to avoid. For the most part, I’ve enjoyed this final season of The Clone Wars. While the first arc, The Bad Batch, felt like a comfortable return to the series, the second arc, featuring Ahsoka and the Martez sisters is where I felt my interest turn from passive, to actively engaged. I know some felt those four episodes were boring, or “filler,” but something about them hooked me on a deeper level than before, and it’s character building helped payoff in the Siege of Mandalore.

Good LORD. From the arc’s first episode, Old Friends Not Forgotten, it was clear this wasn’t going to be your average Clone Wars. From the sleek animation (even more impressive than what the new series already brought to the table), to the cinematic presentation, the Siege of Mandalore sets itself apart in a number of ways.

Bringing in a combination of emotional character beats, stunning action, and impressive pacing, the entire arc plays out more like a film than a TV series. My first thought when the first episode ended was, “this deserves to be on the big screen.” With the arc now completed, that thought has almost turned into a need. Frankly, the way the episodes are set up, flowing into one another seamlessly, I’d be a bit surprised if the ultimate plan isn’t to stitch them together into a singular movie. Perhaps for a special blu-ray release or even a Disney+ event. These four episodes tell a story that runs simultaneously with the events of Revenge of the Sith. There are plenty of moments where events of the film are directly referenced (e.g. Anakin’s killing of Count Dooku) and it grounds the show in a surprisingly emotional way. Where it shines, however, is in how the episodes utilize musical cues to sync up with specific moments from the film. These subtle moments keep the flow of the show going, while still reminding us where we are in the timeline.

The four episodes showcase Ahsoka’s return to Mandalore at the behest of Bo Katan, as she leads a contingent of Clones with Commander Rex to root out Darth Maul once and for all. The goal, obviously, is to free Mandalore from the clutches of the former Sith apprentice and finally bring him to justice. It’s a tall order, and marks the final major battle of The Clone Wars.

I can’t begin to describe the incredible action these first two episodes (entirely focused on this skirmish) deliver. I’m not saying this just because I’m a huge Darth Maul fan and have a 20+ year collection focused on him. I’m saying it because it’s damn impressive. The Lightsaber battle between Ahsoka and Maul (teased in the trailers leading up to the final season) is one of the all time greats shown in Star Wars. On top of bringing the flash and dazzle associated with the Prequel era fight sequences, there’s also a very visceral quality to it. Having Ray Park return to the role of Maul in mo-cap, opposite Lauren Mary Kim’s incredible Ahsoka mo-cap, brought a physicality to the fight that makes it infinitely rewatchable.

While the action is ridiculously impressive and will make it easy to return to these episodes multiple times, the emotional gut punch of the final two episodes, which show Ahsoka having to deal with Order 66. These episodes, especially Shattered, step the pace down, but are no less tense. While they don’t feature the over the top action of the first couple episodes in this arc, there’s a constant, unshakeable, sense of dread. It stays with you throughout the episode, even before Order 66 is enacted, and it makes full use of those emotions to control the audience throughout. Hell, there’s a period of a few minutes in Shattered where nothing happens and there’s no dialog, but the music and facial animations kept me on the edge of my seat.

What appealed to me most in these episodes, are how they put the focus completely on Ahsoka, Maul, and Rex. I know some fans were hoping to see another montage of Order 66 happening, or even revelations about others who potentially survived that we never saw on film. To be honest, part of me was looking forward to something like that as well, but I think the approach they went with worked infinitely better.

We got to see the “big picture” of Order 66 in ROTS, and keeping these events in The Clone Wars on a more intimate/personal level made for a stronger impact. The end result is something that feels like a movie in and of itself that manages to work in tandem with Revenge of the Sith while still working and being engaging on its own merits. The final episode, Victory and Death, seems like it might be a bit divisive for fans. While I won’t spoil it completely, suffice it to say it doesn’t exactly end on the massive, EPIC, note some were expecting. It’s a quieter ending, hitting more on those personal/emotional stakes, but it feels like exactly the conclusion this arc needed.

There’s still some solid action which managed to keep me tense even though I know exactly what happens to these characters (we see them in Star Wars Rebels after all). For me, this final episode works better when considered as part of the entire arc itself.

If you watched it all together as a movie, this would feel like a great (albeit bittersweet) ending. On its own as an individual episode, however, it doesn’t work quite as well. I suspect that will give some fans watching it a hang up, or a feeling of anticlimax, but in context of the overall arc it delivers in a profound way.

While I went into this final season of The Clone Wars as a passive fan, I came away from the finale feeling as though I’ve watched yet another great Star Wars film. In the Siege of Mandalore, the series has attained the maturity, depth, and overall investment normally reserved for the films (at least for me). More than any other arc in the series, I can see myself revisiting this arc often, and even including it in my regular Star Wars rewatches.

Even if you haven’t enjoyed the series previously, or never checked it out, this works on its own. While all the lore and setup from previous seasons/episodes certainly enhance the final arc, they aren’t a requirement to enjoy it. You can watch these final four episodes and still feel like you’re watching a great, standalone, Star Wars cinematic adventure.