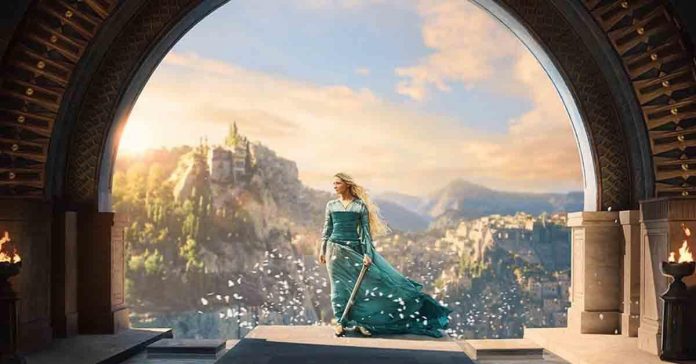 The first two episodes of Prime Video’s massive new series, The Lord of the Rings: The Rings of Power promise something amazing and sets the stage for a thrilling new journey.

I’m a pretty big nerd. I think that’s been well established. I love my fantasy stories (they’re the primary books I read), and generally speaking, The Lord of the Rings movies hold a very special place in my heart. That said, J.R.R. Tolkien’s world of Middle-earth isn’t something I was very passionate about.

I read the original novels, and The Hobbit, but felt that was enough for me. I never felt the compulsion to dive deeper into his world-building aspects and lore found throughout his “histories” and shorts. On the surface, it’s neat, but just wasn’t for me.

As such, I can’t say I was ever all that excited about Prime Video’s The Lord of the Rings series, The Rings of Power. Based on tales out of the Appendices and other Tolkien works, it takes viewers to a completely different era than we’ve ever seen explored on screen before. It’s a cool idea, but just as that source material didn’t appeal to me, I was having a hard time drumming up excitement for the show.

Thankfully, the marketing for The Rings of Power was persistent and by the last couple trailers, I was more than willing to at least give it a shot. I was lucky enough to have the chance to check out the two-episode premiere (coming on September 2nd) and was completely blown away.

The Rings of Power is good. REALLY, really good.

I’m not going to be talking about any specific story spoilers, so feel free to keep reading. Instead, I’d like to talk about the overall feelings I had while watching the episodes. The short version is, I absolutely loved it. While it sets itself apart from Peter Jackson’s iconic films, there’s no denying Rings of Power manages to bring that same sense of scale and production quality.

It’s ridiculous how gorgeous this show is. I know some had fears/doubts based on the initial trailers. Hell, I myself wasn’t sold on the overall production quality by those trailers, but the full episodes are stellar. It feels like you’re watching a big budget movie. Everything from the shot composition, the lighting, the VFX, and overall presentation screams top quality.

Beyond looking pretty, this sense of scale is present within the story being told as well. Taking place in the second age of Middle-earth, we come across the younger, warrior-version, of Galadriel (Morfydd Clark) scouring the land in search of their evil enemy. While the war the brought the elves to Middle-earth has long been over, she’s convinced the evil is still around, lying in wait.

It’s an opinion she’s mostly alone in. As the rest of the elves are ready to move on from the war, and be recalled to their ancestral homelands, Galadriel cannot shake her conviction. Something is definitely “off” in the world, however, and the other races throughout the land are beginning to feel it too.

By and large, the first two episodes are spent setting things up. It jumps between several disparate characters who are spread far across Middle-earth with the only common thread being a general sense of unease. Even in this, however, I was never once bored. I didn’t even find myself anxious to end scenes with other characters in order to get back to another. Each character and subplot feels engaging in their own way, pulling me along, while sprinkling the threads of something much bigger to come.

It’s an impressive balance on a scale other shows have tried, but few managed to get just right. Even with this epic scope in mind, Rings of Power still manages to keep the story intimately on the characters. There are hints of a looming threat, but it’s presented in a personal way that makes the danger feel more pressing/immediate on the character’s levels.

Without going into spoilers, there’s a moment where characters encounter an Orc. Signular. Just one. We’re used to seeing Orcs in Middle-earth as something of mindless goons in the course of full scale battles being slaughtered by the dozens thanks to our heroes. Here, however, the show manages to bring a real sense of menace/danger to the creatures. Even as we watch them deal with ONE Orc, there’s a level of tension to the scene that kept me on the edge of my seat. In this way, Rings of Power does a phenomenal job of keeping the danger personal, while still hinting at larger—world encompassing—threats.

The characters we meet in these episodes include Harfoots (Hobbit ancestors), humans, Elven rangers/scouts, an apothecary, Elrond, Dwarves, and more. It’s an expansive cast of characters, and much of these first couple episodes are spent introducing audiences to them all and building up the tension of the larger story at play.

Despite featuring all these different characters/minor storylines that seem so different, none of it felt cluttered or messy. I was impressed with how quickly I came to enjoy these characters. Almost all of them manage to be instantly endearing, setting up their personalities and general background within just a few minutes of screen time.

It’s indicative of how well the show balances a tight script with bits of visual storytelling that allows audiences to observe and consume necessary information without any exposition dumps needed from character dialog. It also shows how impressive the casting for the show is.

Every actor brings something special to their role, feeling distinctive while perfectly aligned within the world of Tolkien. Morfydd’s version of Galadriel is stunning and helps drive the main focus of the show forward in impressive fashion. Ismael Cruz Córdova’s Arondir manages to capture the stoic soldier, while hinting at the depths of his hidden (forbidden) love throughout. Robert Aramayo is wonderful as Elrond, a role I so firmly associate with Hugo Weaving I was concerned I’d be able to separate the performances.

There are so many more great, nuanced performances (I haven’t even touched on the fun of the Harfoots). I would be remiss, however, if I didn’t give Sophia Nomvete a quick mention. Her role as the Dwarven Princess Disa is, simply put, a goddamn delight. Seriously, from the minute she comes on screen, there’s a sense of warmth that emanates into the story. It’s infectious and while her role is relatively small in these episodes, her little moments are ones I keep coming back to.

All in all, The Rings of Power took me completely by surprise. There’s a sense of epicness to the show and story that keeps me thinking about it and wanting to dive into even more. Again, I’m not a hardcore Tolkien/Middle-earth fan, but I found myself instantly attached to these characters and the lore being thrown about. I know there are many references to some of the deeper lore that long-time fans will undoubtedly be drooling over.

The Lord of the Rings: The Rings of Power is exactly the bold, epic, storytelling fans were hoping for, but manages to appeal to a broader audience at the same time. Being set so many thousands of years before the main events of the original novels/movies makes it an easy entry point for brand new viewers. I can see this series bringing in a whole bunch of new Lord of the Rings fans.

Personally speaking, I’ve already watched these premiere episodes three times. I very rarely rewatch TV shows (mostly due to time constraints with kiddos and such), but I found myself unable to stop thinking about the show’s story and beauty. I wanted to come back to this world for a bit, even as I must sit and await the next episode.

I know it’s early and there’s no telling where the full season is heading, but The Rings of Power has the makings of something very special. Even if you’re already consumed with another grand fantasy show (House of the Dragon rules in different ways), you’ll want to give this show a shot.

The Lord of the Rings: The Rings of Power premieres on Prime Video with two episodes on September 2, 2022, with new episodes debuting every Friday after.