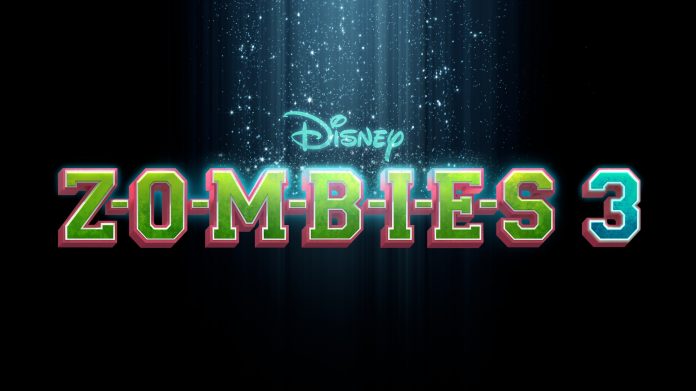 The upcoming third movie in Disney’s popular Zombies series finally has a release date; coming to Disney+ first before the Disney Channel.

I’m not ashamed to admit that Zombies and Zombies 2 are movies that I greatly enjoy. As far as DCOMs (Disney Channel Original Movies) go, they’re top-tier. My youngest loves watching them, and they remain surprisingly catchy with solid messages. So yeah, I’m pretty thrilled to see a release date for the third movie, considering Zombies 2 ended on a cliffhanger of sorts.

Though the franchise started as a DCOM, Zombies 3 will premiere first on Disney+, arriving on July 15th. It will then hit the Disney Channel on August 12th and will include bonus footage along with an entirely new song. So, a win-win for everyone who’s been looking forward to it. On top of that, they also revealed some new casting today, which includes RuPaul!

The multi-talented actor/host/recording artist RuPaul Charles (“RuPaul’s Drag Race”) joins the cast as the voice of “The Mothership,” a comedically passive-aggressive UFO that brings the aliens to earth.

“ZOMBIES 3” stars Milo Manheim as zombie Zed and Meg Donnelly as cheerleader Addison, who are beginning their senior year at Seabrook High in the town that’s become a safe haven for monsters and humans alike. Zed is anticipating an athletic scholarship that will make him the first zombie to attend college, while Addison is gearing up for Seabrook’s first international cheer-off. Then suddenly, extraterrestrial beings arrive in Seabrook, provoking something other than friendly competition. The movie also stars Chandler Kinney as Willa, Ariel Martin as Wynter, Pearce Joza as Wyatt, Carla Jeffery as Bree, Trevor Tordjman as Bucky, Kylee Russell as Eliza, Terry Hu as A-spen, Matt Cornett as A-lan, Kyra Tantao as A-li, James Godfrey as Bonzo and Kingston Foster as Zoey.

The movie soundtrack features eight new song and dance numbers that shake things up by leaning into current trends while encompassing an “out-of-this world” sound. The song “Alien Invasion” kicks things off with a sci-fi vibe and electronic track that evokes “Close Encounters,” while new songs for Zed and Addison — including a third rendition of their hit duet “Someday” — reflect how their characters have grown and changed. Meanwhile, the werewolves pursue the Aliens in “Come On Out,” an edgy song with a suspenseful feel. The digital soundtrack from Walt Disney Records will also be available on July 15.

Will you be tuning in for Zombies 3 this Summer?