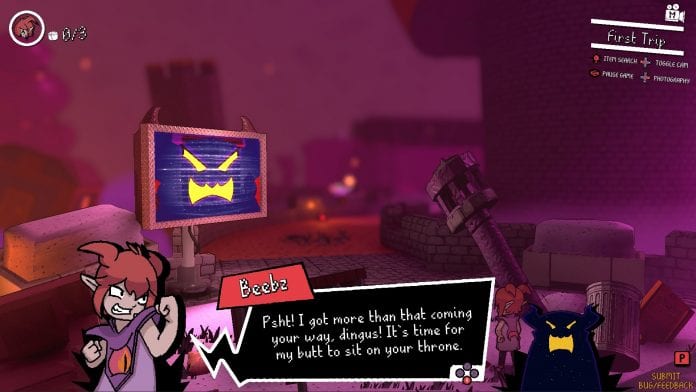 During [email protected], Playtonic Friends revealed their first title after dipping into the world of game publishing; a new platformer call Demon Turf.

Because we all need more platformers in our life, Playtonic and Fabraz have revealed Demon Turf. The new game, which uses a hybrid 2D/3D style will make you a demon out to conquer territory and ultimate defeat the Demon King himself.

Taking the role of Beebz, a mere 1000 year old demon, players must reclaim the numerous “turfs” of the Demon world, defeat the Demon King and claim the throne for themself.

But don’t take our word for it – go try it right now!

Every week, the team at Fabraz introduces a brand new “demo” of the game on Steam. Except it’s not a demo in the usual sense – Demon Turf Trials throws down a new challenge and presents a fresh leaderboard for players to climb. Make it to the top of the board and be immortalised with a personal portrait in the main game (plus a winners only, limited edition T-shirt)!

Trials also offers a full tutorial and two complete main levels of the full game. All free to play!

Demon Turf is a unique offering with its community & replayability at the very core of its essence – beyond the weekly Demon Turf Trials the full game will also boast:

Self placed checkpoints – Show off without them for a perfect run, or place one in preparation for a challenging section. You can even teleport between these checkpoints if you missed a collectable along the way!

Return Levels – a brand new take on progression, take a victory lap and explore previously beaten levels to discover their liberated state, with plenty of mechanical and environmental changes to uncover

Physics driven combat – How do you defeat the demon hordes when none of your own attacks are actually lethal?A special physics-driven combat system that ramps up the chaos and fun. Push, pull and spin your enemies out of your way and down cliffs or into spikes.

Mouth Watering amount of side content – 50 specific locations/characters to line the walls of an empty gallery. Fend of 25 arena challenges worth of enemy waves. Tackle 10 Demon Soccer Golf courses that put a bizarre twist on ball-pushing puzzles. Collect 8 cartridges to unlock remixed throwback levels from glorious 3D platformers of the past

Fabian Rastorfer, Game Lead and Artist at Fabraz, commented “I’ve always wanted to create a 3D Platformer, they’ve been my favourite genre all my life, having grown up playing all of the notable ones on pretty much every console! With our 2D platformer, Slime-san, we received a lot of praise for what we brought to 2D precision based platforming so we really wanted to see if we can translate the spirit of what made Slime-san great into a 3D Platformer”.

Demon Turf will launch this Summer on pretty much everything, including Nintendo Switch.