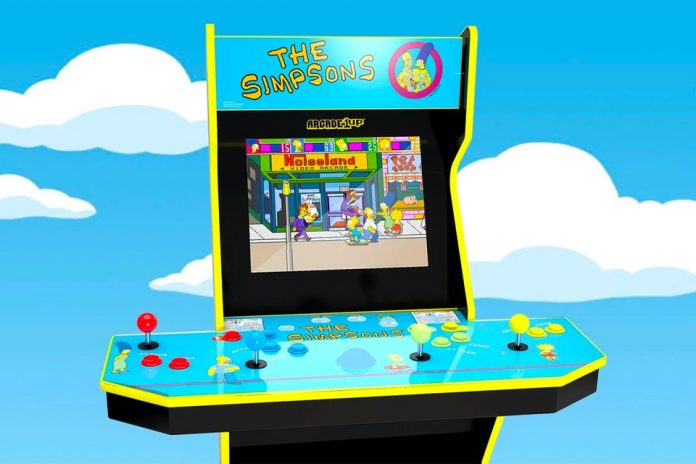 Fans looking to get their hands on The Simpsons replica arcade from Arcade1Up should get your wallets ready for pre-orders shortly.

Announced during the E3 2021 festivities, Arcade1Up is bringing back one of the most popular Simpsons games ever, the Arcade game. Launching later this year, fans/gamers will be able to get in on pre-orders for the machine on August 16th:

Tastemakers LLC’s Arcade1Up, the leader in home retro gaming entertainment, begins preorders for one of their most anticipated arcade machines yet: The Simpsons at-home arcade machine, releasing on the 30th anniversary of the game’s first entry into the market. Arcade1Up’s latest at-home arcade machine transports fans back to the early ‘90s, where players can play as Homer, Marge, Bart, and Lisa, to take on swarms of their favorite televised characters.

“Arcade1Up is excited to expand its family home game room offering with a modern lens on retro gaming and classic pop-culture game collection editions like The Simpsons” said Scott Bachrach, CEO of Tastemakers, LLC and Arcade1Up. “With over 2 million home arcade and pinball machines sold by Arcade1Up, fans of The Simpsons will enjoy bringing home the authentic arcade experience with endless gameplay.”

Exciting features consumers can bring home with The Simpsons home arcade machine include:

2 Games in 1: The home arcade machine comes with The Simpsons Arcade Game and a bonus game slated to be announced during pre-orders this summer.

Retro Authentic Artwork: True to the original arcade machine, this custom shaped machine and matching riser design with lit marquee is the perfect conversation piece for any room in the home and even offices with its stunningly vibrant graphics.

Easy Assembly: Once the arcade machine is plugged in at home, players can follow the in-game setting menu and on-screen game selections. No coins required!