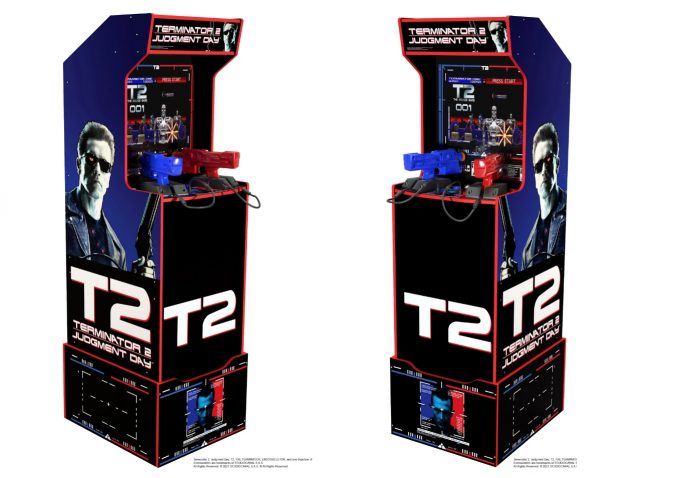 Arcade1Up has revealed an exciting new addition to their line-up of replica cabinets, bringing the iconic Terminator 2 light-gun game into your homes!

Well this is just freaking cool. Everyone who’s been to an arcade within the past 30 years have likely seen/played the T2: Judgement Day light-gun game. Soon, you’ll be able to bring that experience right into your home with one of Arcade1Up’s scaled cabinets!

In anticipation, Midway developed T2 the arcade game simultaneously with the film’s production and release. Utilizing sleek light guns for one or two players to play the roles of T-800 cyborgs, the game featured Arnold Schwarzenegger, Robert Patrick, and Eddie Furlong reprising their respective roles in digitized footage.

Exciting features consumers can bring home with the Terminator 2 home arcade machine include:

2 in 1: The home arcade machine comes with Terminator 2: Judgment Day and exclusive behind the scenes footage on how the Terminator 2 game was made!
Hasta la vista: The game features Arnold Schwarzenegger, Robert Patrick, and Eddie Furlong reprising their respective roles in digitized footage.
Force Feedback: Utilize sleek light guns for one or two players to play the roles of T-800 cyborgs. The gun vibrations and sound effects add additional levels for a more immersive experience.
Easy Assembly: Once the arcade machine is plugged in at home, players can follow the in-game setting menu and on-screen game selections.

“Having the ability to bring the Terminator 2 arcade game into the comfort of its fans’ home is something we’ve always wanted to do,” said George Petro, Founder of Play Mechanix, Inc. “We are looking forward to expanding our partnership with Arcade1Up and revolutionizing the at-home arcade gaming experience with our collaboration on this product.”

The company announced the new addition to their already impressive line-up this morning, promising pre-orders going live on November 1st. So head over to their site to check out more images and to get alerts for when sales go live.