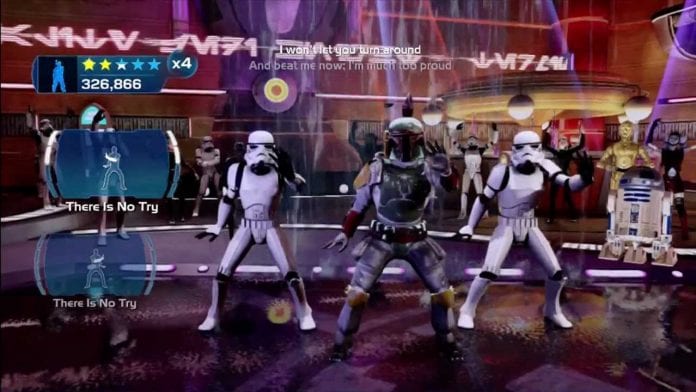 We’re taking a look back at some of the strangest games to have carried the Star Wars branding, including ones that deserve another shot.

I’m very excited to see the Star Wars license opening up to more developers. Beyond just ensuring games come out (hopefully) with increased frequency, it also gives us the chance to embrace some of the weirder gaming ideas/genres.

Back in the day, LucasArts and the developers they worked with experimented with putting the Star Wars franchise into various gaming genres. Some of them have worked out incredibly well, but a few of these experiments….not so much. On the heels of the announcement that more developers are getting into Star Wars game-making again, I thought it’d be fun to take a look back at some of the strangest titles from the past.

It’s almost impossible to have a list like this and not mention Masters of Teras Kasi, which continues to be counted as one of the worst Star Wars games out there. While I largely agree with that sentiment, I think the reason why is different from others. It’s just weird.  When you think of the Star Wars universe and all it has to offer, a Mortal Kombat style fighting game doesn’t immediately spring to mind.

That premise alone is enough to raise some eyebrows and stoke the ire of some fans. What made things worse, is that the game itself was mediocre at best. The fighting mechanics weren’t polished, ridiculously unbalanced, and featured odd power-ups that made no sense in terms of Star Wars. The general idea of giving fans the ability to have their favorite characters face-off in battle could be interesting, it sure as heck didn’t work out that way.

There’s still a certain charm/fun factor to the overall game. It’d be interesting to see another Star Wars fighting game attempt, especially with shows like The Mandalorian making such fighting matches a more visible element in the galaxy far, far away.

There was a period of time in the gaming realm, where vehicular combat (e.g. Twisted Metal) was all the rage. LucasArts wanted to cash-in on the action by slapping something together utilizing the Star Wars license. When I say “slap together” that’s pretty much what I mean when it comes to Star Wars Demolition.

The game’s story tries to make sense of everything and explain why Star Wars vehicles/characters would be involved in such a death race. Essentially, Podracing has been outlawed, so in order to appease the hungry masses, Jabba creates this demolition instead…Because, that’s way safer right?

The game itself is about as flimsy as the premise; featuring clunky game mechanics, poor visuals (even for the time), and buggy to the point of not being any fun. Not too mention the game featured Boba Fett as JUST himself. Yes, a vehicle combat game with a character who had no vehicle.

I could see why this might make sense. Some of the coolest moments in Star Wars have come from big spaceships/tanks/etc (you know, “vehicles”) slugging it out in massive battles on the screen.  Demolition, however, didn’t take that approach, instead making the matches seem way smaller than that.  If you want to duke it out with Star Wars vehicles, go with Battlefront II or Squadrons.

The Star Wars brand seems perfectly suited to the Real-Time Strategy genre of games. After all, the movies are about a war on a galactic scale with armies on both sides. A couple of games have made excellent use of this concept, but one of their first outings in the genre (first in 3D) was a poor effort indeed.

Force Commander had the right idea; taking command of armies on for both the Empire and Rebellion and forging it’s own unique story that at times intersected with the most interesting battles from the original films. The main problem came down to the game’s execution. Force Commander was their first attempt at using a 3D RTS engine for Star Wars, and their lack of understanding that technology was apparent.

The controls aren’t intuitive and require a steep learning curve to fully understand what you’re doing. Even then, the results aren’t that impressive and caused a lot of grief. Simply navigating my way around the battle maps was a chore to accomplish, and building units/structures was computer punching-ly frustrating. Fortunately, Force Commander was not the end of their RTS excursions and fans were given the excellent Galactic Battlegrounds and Empire at War to enjoy.

Episode 1 Racer and Racer Revenge proved that a racing game set within the Star Wars universe has potential. After getting the chance to play the original again thanks to its newest remaster, I’m still crossing my fingers for a new Star Wars racing game in the future.

That said, not every attempt has been successful. Especially when LucasArts decided they wanted to get in on the more cartoony/arcade style gameplay of Kart racers (Mario Kart, Crash Team Racing, etc) with Super Bombad Racing.It took the karting formula and put in some heavily stylized and deformed Star Wars characters behind the wheels.

Overall it’s not a terrible idea, but it’s not a concept fans were looking for. For one, it’s not a strong karting game. Its mechanics aren’t horrible, but they’re far from polished. I could see the concept working better with a developer who put some genuine time and care into it. Hell, attach it to the LEGO brand and it takes away the weird factor pretty quick.

What Star Wars fan doesn’t dream of wielding their own Lightsaber and hurling enemies around with the Force? The idea behind Microsoft’s Star Wars Kinect game was specifically to accomplish that and give fans the chance to experience Star Wars in an immersive way via the Xbox 360’s Kinect sensor.  It’s a neat idea, but the game is put on this list specifically for the DANCING game that was included!

Yes, for some reason, the developers thought that putting in a Dance Central style dancing game. It’s unique and quirky, giving Star Wars the irreverent treatment that is sorely missed these days in their games (except in LEGO outings). While I can’t say it was a “good” game, it’s a silly experiment that still gets a chuckle out of fans.

Trying things out is the only way for any artistic medium (including video games) to grow and find new ways to entertain people. While these Star Wars related experiments weren’t ultimately successful, some of them were based on concepts fans could be excited about.

I hope opening up the license to more developers gives us the chance to experience some weirder Star Wars titles once again, perhaps with just a little more polish. Which of these weird Star Wars games did you play?