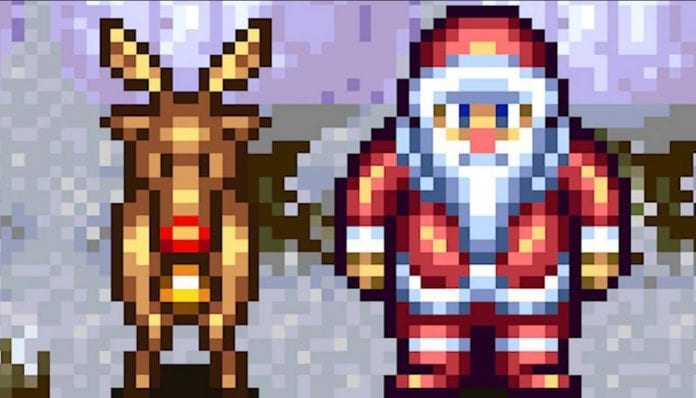 To celebrate the holidays, we’re taking a look at some of the most unexpected Santa encounters in video games.

It’s Christmas Eve and kiddos all over are eagerly awaiting the arrival of Santa Claus. As such, I thought it’d be a fun time to look back at the various times the iconic gift-giver has popped up in video games in some interesting/unexpected ways. Lots of gamers have fond memories of the original Shenmue game on the Dreamcast. The RPG felt revolutionary for it’s time and allowed gamers the chance to feel like they were interacting within a living/breathing world. One of the ways it did this was by using the system’s internal clocks to trigger events on specific days (something that seems more common now, but super immersive back then). Among these is a cheeky appearance by St. Nick himself.

Gamers who played Shenmue on Christmas Day would find themselves coming across Santa while roaming the streets. He will wish gamers a “Merry Christmas” and then inexplicably tells you to buy a hamburger. It’s a strange encounter to be sure and I’m not sure how he comes to equate the holiday with hamburgers, but you can’t argue with Santa! The Nintendo 64 sequel to the quirky fighting game, ClayFighter, allowed players the chance to take control of Sumo Santa. While the character is technically a CLONE, and not Santa himself, I think he makes the cut for our purposes here. While the 90s fighting series was known for it’s weird, irreverent characters (already including a sinister Frosty the Snowman-esque fighter), what made this appearance feel unique was the whole backstory attributed to him!

Sumo Santa has taken over the North Pole and must defeat all the Clay fighters in order to finish his plans. In the original release, these plans included world domination, but in the special Sculptor’s Cut release of the game, Sumo Santa actually wants to takeover and keep making toys for children (a decidedly nicer goal). Squares Action RPG, Secret of Mana, features a sprawling story that has stuck with gamers over the decades since its release (and many re-releases). The game features a fairly typical fantasy adventure that sees you traveling the land to set the world back to the way it should be. This includes a trip to the North Pole–er, the Ice Country.

What really sets this Santa appearance apart from others, is that he actually plays a role in the story. When you arrive in the Ice Country, you’re approached by none other than Rudolph, who informs you that his “boss” has been kidnapped by a giant. After a big boss battle against Frost Gigas, you’re shocked to learn the giant was none other than Santa himself!

Having grown despondent over kids’ lack of belief, Santa used the power of Mana to try and recapture their imaginations. The Mana, however, corrupts him into the gigantic villain. But it’s okay, because players saved the day, and ultimately, Christmas! Remember Gex? Crazy to think it’s been so long since this franchise has seen any action. Considering it once seemed on track to hit the same levels as other iconic gaming mascots of the 90s…Alas. Santa makes an appearance in the final game of the series, Gex 3, and shows up super early.

In one of the game’s first stages you’ll be tasked with navigating the North Pole. You’ll have to take out snowboarding elves, and the stage’s mini-boss will pit you against the Jolly-man himself. Unlike the Santa from Secret of Mana, who’s been corrupted, this one is pure evil and must de defeated. Being early in the game, he’s a relatively easy boss to defeat, but the memories continue to haunt… ToeJam & Earl, which launched early in the 90s for the Sega Genesis, is a strange game. You take on the role of rapping Aliens who’ve crash landed on Earth and must roam around finding missing pieces of your ship. It’s a fun title that frequently pokes fun at various pop-culture elements that would seem strange to people from other planets.

Of the many Earthlings you’ll encounter, you’ll have the rare opportunity to sometimes encounter Santa Claus. The goal when you find him, is to sneak up and try and get his sack of presents. Doing so isn’t the easiest, however, and if he spots you making a move he’ll fly away in his *checks notes* jetpack.

Over the many decades of gaming, Santa has popped up a number of times. Sometimes as  a fun treat, others as a villain. No matter the circumstances, or your age, it’s always fun to find St. Nick in your game.