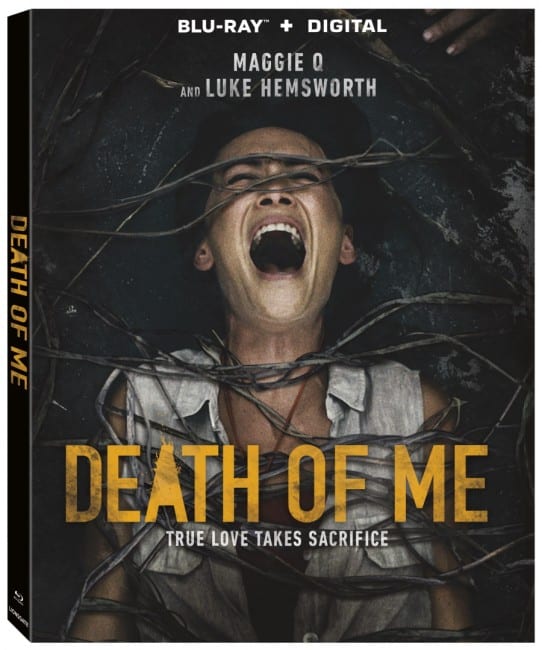 Maggie Q and Luke Hemsworth face a supernatural threat in “Death of Me,’ now on Blu-ray! Here’s our review!

An American couple on vacation in Thailand (Maggie Q and Luke Hemsworth) make all the worst decisions when they get caught up in a deadly supernatural situation. Directed by Darren Lynn Bousman.

I’m going to break from my usual practice of not revealing major plot points in a film review. I have two reasons for this: one, the trailer for Death of Me reveals many of these points already. Two, even after having seen the film, I still have no idea why most of the events in the movie even happened. Knowing these points ahead of time won’t affect your viewing experience much. Death of Me is a mess of a film, regardless of what you know going in.

Going in, I had high hopes for the movie. It stars Maggie Q, which is reason enough for me to watch. It’s directed by Darren Lynn Bousman, who helmed Saw II, III, and IV. It also stars one of the Hemsworth brothers. You would think between the three of them, we could get a halfway decent film. But no.

Maggie Q and Luke Hemsworth play a couple on vacation on a remote island in Thailand, who stumble upon a Far East version of The Wicker Man. That’s not necessarily a good thing: Death of Me takes The Wicker Man premise and buries it under a mountain of incomprehensible visuals and a logically incoherent plot.

The film follows Christine (Maggie Q) and Neil (Hemsworth) after their vacation quickly goes south. They wake up in their hotel room after a night of drinking with no recollection of what happened or how they got back to their room. They check their camera and cell phone, which conveniently recorded much of what happened. That includes video of Neil appearing to kill Christine and bury her. Christine is very much alive, although her body shows evidence of being attacked and buried. Neither one has any idea of what is going on, so they set out to find out the truth. Sort of.

Rather than building tension and allowing the mystery to unfold, much of the film revolves around Neil and Christine running around the island, screaming at each other, and generally making dumb decisions. The viewer is left in the dark as well, which makes for a confusing – and ultimately tedious – viewing experience. There’s all sorts of misdirection and incoherent imagery thrown at you, and by the time the “big reveal” comes, it honestly makes no sense.

Spoiler alert – the big reveal is that everyone on the island follows an ancient ritual which preys on unsuspecting tourists. You would think that sort of thing would generate some bad reviews on Airbnb and Yelp, but apparently not.

After realizing what is actually happening (and honestly, you’ll figure it out far before the movie actually tells you), you’ll spend the rest of the film trying to work out the logic. Why didn’t the villagers just take Neil and Christine’s phone and camera, which had all the incriminating footage? Why do they let them run around the island – where they could lose track of them – when they needed them for the ritual? Why not tie them up? Why does the movie think you’ll find the island residents creepy and untrustworthy, just because they look different? Isn’t that sort of racist?

I have to give credit to Maggie Q and Luke Hemsworth for at least trying to sell the outlandish premise. No performance, however, could save a movie whose screenplay strings us along and doesn’t really deliver. It’s amazing that it took three screenwriters – Ari Margolis, James Morley III and David Tish – to crank this out.

Director Darren Lynn Bousman tries to add some polish and set the right horror vibe, but there just isn’t any tension in the story. When you spend most of your time wondering why Neil and Christine make such dumb decisions, you know the movie just isn’t working.

Death of Me is 90 minutes of disappointment and missed opportunities. Horror fans should give it a watch once, just for kicks, but it just doesn’t earn repeat viewings.

Death of Me sports an often-impressive high-definition video transfer, which showcases the beautiful Thailand locale where it was filmed. Even when the cinematography choices are lacking, the AVC-encoded image offers good detail, and colors are deep and natural.

To give the film a supernatural feel, the video is often manipulated, with blurred and distorted images that affect the overall quality in some scenes. At other times, some of the shots of the island aren’t as sharp as the rest of the film, leading me to believe some stock footage may have been used for some establishing shots.

The sound mix is a crisp 5.1 DTS HDMA track, and it sounds quite good. There is some effective atmosphere, but the mix isn’t particularly active.

The Blu-ray is disappointing in the bonus features department. We do get an extended featurette on the making of the film, but that’s it.

The special features are as follows.

“Island Magic: Conjuring ‘Death of Me’ Featurette. Director Darren Lynn Bousman and members of the cast are featured in this “making of” featurette. Running Time: 23:13

Digital Copy. A code for a digital copy of the film, redeemable at services including VUDU and FandangoNow, is included. Lionsgate codes are not redeemable through Movies Anywhere.

Click here to order Death of Me on Blu-ray from Amazon!