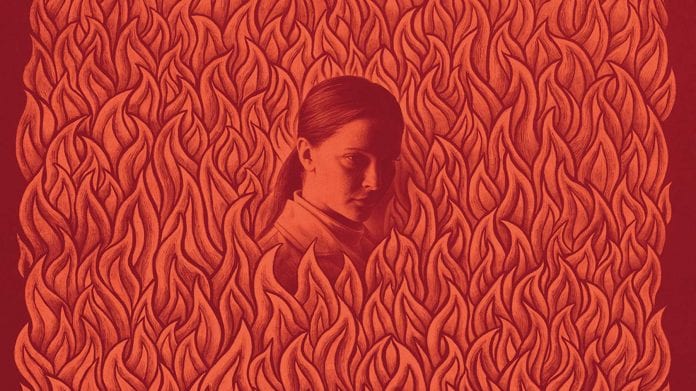 As the year comes to a close, I take a look at five of the most stunning movie posters to have released.

The movie poster is often our first look at an upcoming film. While some are only there to let you know about a movie’s existence, others seek to catch your eye and work as art on their own. 2020 has been a strange year for the movie industry (and just awful all around) which meant the normal marketing machine we’ve become accustomed to was drastically different. Even so there were some stellar pieces of poster art released this year that I think are worth revisiting.

[Note: These are for posters released this year, even if the movie itself has been pushed back/won’t release until 2021.] The Green Knight (Design by B O N D)

Announced near the start of the year, The Green Knight instantly caught the attention of movie lovers all over. Frankly, it’s been one of the films I’ve been looking forward to most throughout the year (I’d been crossing my fingers for a VOD release, but alas). While it’s trailer is engaging as well, the poster is just absolutely stunning. Even without knowing anything about the film, or it’s Arthurian source, there’s no denying the eye-catching appeal and would look gorgeous hanging up on any wall. Now I sit back and eagerly await it’s 2021 arrival… Spike Lee’s latest dealt with the repercussions of the Vietnam War and continued racial problems in a way that’s both touching and entertaining. Despite the heady themes at play within the film, the first poster takes a “less is more” approach with impressive results. It’s a stunning portrait that instantly grabs your attention and makes you want to know more. Color Out of Space: Design by Tom Hodge

Lovecraft is never an easy source to adapt, but Color Out of Space manages to do it with aplomb. The film is a visual feast in a number of ways, and this poster offers only a hint of what audiences can expect. This poster just barely makes the cut, having been released in January for the film’s UK release, but it’s a gorgeous piece of art that’s definitely worth mentioning. Much like The Green Knight, A24’s Saint Maud was supposed to launch this year and fans have been eager to dive into this psychological horror flick. Because of the multiple delays, Saint Maud has actually seen a handful of absolutely gorgeous posters released, any of which could have ended up on this list. This poster released during the Summer has stuck with me the most, however, and the first one that comes to mind. Either way, if the film is as good as its posters, we’re in for a treat next year. David Fincher’s latest film is an ode to Old Hollywood in just about every way. From the handling of its shots/transitions, and fast-talking style, and everything in between. It’s an aesthetic that pulls you into the film in a unique way and this poster is no different. Drawn in the style of studio posters of the 30s and 40s, it pays homage to Citizen Kane in much the same way the film itself does.

There are obviously several other great posters released this year, but since I limited myself to only five, these are the ones that stuck with me the most throughout this strange year in entertainment. Which posters caught your eye the most?