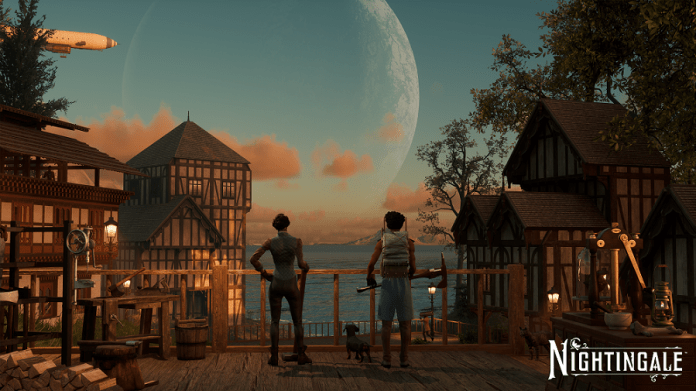 During the Summer Game Fest Play Days, we had the chance to chat with the head of Infelxion Games, Aaryn Flynn, about his name game: Nightingale!

My favorite genre of games to explode over the last half a decade are survival crafting games and there was a grand total of ONE title at Summer Game Fest Play Days. And that’s okay because this singular title is one that has been on my heart since it was first revealed at The Game Awards in December: Nightingale.

I got the chance to sit down with Aaryn Flynn, the head of Inflexion Games, to discuss the new title. Flynn has a long history in the gaming industry that includes more than 17 years with BioWare. He started as a programmer in 2000 and ultimately became General Manager at BioWare. In all that time Flynn worked on iconic franchises like Dragon Age, Mass Effect, Baldur’s Gate, Jade Empire and Star Wars: Knights of the Old Republic.

Flynn isn’t the only Bioware veteran at Inflexion Games, however, which is home to a number of former Bioware developers dedicated to bringing Nightingale to life. Nightingale sets players on the journey of the Realmwalker where they must survive across the myriad of increasingly-dangerous realms. Explore alone or band together with other survivors, obtaining valuable materials to construct settlements, and craft vital tools and weaponry as you fight against deadly monstrosities and the Fae, humanity’s magical rivals.

“Our team at Inflexion Games has been working diligently to create this enthralling universe of magic, mystery, and wonder, and we are thrilled to finally be revealing it to the world,” said Aaryn Flynn, Inflexion Games CEO, said in December. “We are also privileged to have such extraordinary partners backing the studio, with the proud support of Tencent, as well as collaborating with Improbable’s worldwide teams as we leverage its IMS tools.

“From the beginning, we knew we wanted to build an intricate fantasy setting as rich and full of history and life as anything we’ve worked on in the past. The realms of Nightingale are vast and have many secrets to uncover, and we cannot wait for players to start discovering them.”

Nightingale was part of the Summer Game Fest Day of Devs livestream to showcase the reveal of a new gameplay trailer and a key aspect of the game: Realm Cards.

You can catch the new trailer here:

Realm cards are craftable items that allow players to control some aspects of the worlds they will work to survive in. The realm cards also signaled to players another key aspect to the game: procedural generation and the endless number of portals that can spawn.

Flynn explained the purpose of the realm cards is to give players some modicum of control over certain aspect of what is behind the procedurally generated portals you will jump into, explore and survive within.

“Is it a forest? Is it a swamp? Is it a desert?” Flynn said at Summer Game Fest Play Days. “Whatever it is, you get to control the creatures in the portal, you control how difficult or easy it is, you get to set things like whether its always nighttime. You can manipulate the weather and, gameplay wise, different environments will have different challenges or different rewards.”

As a fan of the survival genre, I wanted to better understand the purpose of the realms and for the inspiration behind Nightingale in general. I included the full transcription for clarity:

Q: It’s a PvE survival game, so for the realms, are they almost roguelike? Is there something that you complete to finish the realm before moving onto the next? Or are they intended for long term stays that end in permadeath?

Aaryn Flynn: A little of column A. You can set your estate in any realm you want, so you can just keep adventuring and hopping through realms. We call it Realm Diving. Then you decide where you’re gonna stay and then keep going further and further. But you will have a but of a story leading you through, trying to take you to find NPCs, take you on certain adventures until you eventually reach the ultimate conclusion of that adventure and achieve some cool stuff.

Q: What was the inspiration for Nightingale?

Aaryn Flynn: A lot of coming from BioWare, myself included, we’ve made high fantasy games, we’ve made sci-fi games, so we really liked he idea of making a contemporary fantasy game. Something that is more grounded in the real world and that’s more relatable with outfits you may recognize and stuff like that. We loved that idea and thought the survival crafting genre was a great match for that.

So myself and Neil Thompson, our art director, had read a book called Jonathan Strange & Mr. Norrell, which is a contemporary fantasy novel by Susanna Clarke set in Napoleonic Times about two men who rediscover magic by connecting with the Fae. And we just loved that. We got some early inspiration from that but then lots of other things, both Eastern and Western fairy tales started feeding into it.

Neil likes to say we’ve got a broad inspirational palate, so we’d like to look at everything from books, to other games, to film, to TV, to sort of inspire things. A lot of the clothing comes from Netflix shows and things that have embraced the Victorian era.

Q: How does it feel for you to have such a storied history in the industry with titles and names that people really respect and, now, you’ve got something you’re building on your own?

Aaryn Flynn: It’s very rewarding. It’s very humbling that so many folks have joined our studio. We’re over 100 folks now that Tencent came along and loved our vision, so much that they are funding us so well and letting us really focus on the game experience. And giving us really good guidance and advice from the lessons they’ve learned to connect us to other studios they’ve invested in. So there’s a really cool community there. It’s just a really really great place for us right now.

Q: What is your personal favorite aspect of Nightingale?

Aaryn Flynn: I love the realm card system, I think it’s really cool. But I think when the NPC’s come out, you see some the characters and some of the interactions you have to have. I think people are gonna really appreciate that and on the world building side of things.

Nightingale is expected to enter into early access later this year on PC.