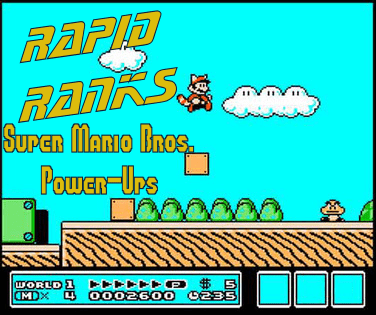 This is Rapid Ranks, a video series where we rank everything in under six minutes. The ranks are made under serious consideration but delivered in a humorous and entertaining way. Let us know what we should Rapid Rank next!

If you can’t watch it, the full written rankings are below. Enjoy!

The best part of every Super Mario game are the power-ups. You can’t tell me you don’t get tempted or excited to see what’s in the box with the bright white question mark. We all do. Today, we’re ranking each power-up prize, we go out of our way to risk life and limb for.

Before we begin, a few ground rules. These are power-ups that only affect Mario and Luigi. Power-ups from the Mario Maker series or any other Mario games outside of the Super Mario series were excluded. Power-ups like the 1-up Mushroom were also excluded, as they aren’t exactly a power-up. These ranks were based on strength, frequency of use, and excitement felt. Alright, let’s get to the ranks. S-Rank: These are the superior Power-ups that are must-use in every situation.

Cape Feather – The Cape Feather made Mario feel like a superhero! He donned a cape and glided around the Mushroom Kingdom like a chubby Superman. The way you could glide, attack with the cape, and dive bomb made the Cape Feather an iconic power-up.

Fire Flower/Gold Flower – The gold-standard of power-ups is the Fire Flower. From Day 1, it’s been a highly-sought after power-up for its sheer ability to turn anyone on the opposite end of a fireball into dust.

Lucky Bell/Super Bell – You’re a monster if you hate the Cat Forms. They can pounce, climb up walls, and slide into enemies. Plus, the Lucky Bell lets Cat Mario become a statue! It could also be possible this selection was made by my cat, Shadow.

P-Wing/Super Leaf/Invincibility Leaf – The only difference between the Tanooki Suit and the Raccoon Suit, these power-ups produce, is that the Tanooki Suit lets you become a Statue. Even without the statue, this suit is in the same class.

Super Star – No power-up is more iconic than the Super Star. This immunity gifting power-up is one of the most sought-after power-ups in every level and has even been a focal point of games in the series. The mushroom may be synonymous with Super Mario Bros. but I’d argue the Super Star is more important.

Tanooki Suit – The Tanooki Suit is an all-time great power-up. It transforms Mario into a raccoon suit that’s able to fly, attack, and turn to a statue that’s immune to attacks. The premiere Super Mario suit. A-Rank: is for Power-ups that are great and fun to use

Boomerang Flower – The Boomerang Flower belongs in the A-class because it has an offensive function, reaches distant items, and it can even generate an extra life in Super Mario 3D Land.

Cannon Box – Remember having to dodge cannonballs on Bowzer’s airship? Lets see how they like it with the cannonball firing Cannon Box!

Double Cherry – I really like Double Cherry because it let you make copies of Mario in whatever form he was in. Having 5 Fire Marios was unstoppable.

Frog Suit – The Frog Suit was a fun power-up, but only in water. It made Mario swim so smooth and fast and jump so high, but on land you could only hop.

Hammer Suit – Hammer Chucking? Check. Fire-proof Shell? Check. This was one of the most sought-after suits in Super Mario Bros. 3 and it’s no wonder why.

Ice Flower – Ahh the icy sibling of the Fire Flower. It’s an awesome power-up that lets you freeze enemies. It just couldn’t quite hit that iconic status.

Mega Mushroom – The Mega Mushroom may have debuted in Mario Party 4, but it became famous in New Super Mario Bros. It’s kind of a cheat the way you can demolish entire levels and enemies, but it’s so fun no one cares!

P-Acorn/Super Acorn – Who would’ve thought that two Italian plumbers would one day transform into Flying Squirrels? Not me. Yet, that’s what happened in New Super Mario Bros. U and it worked.

Penguin Suit – The Penguin suit was pretty OP for New Super Mario Bros. Wii. You could throw ice balls, swim fast, slide on ice, and were even impervious to some enemies.

Piranha Plant – Ever wanted to run around using a Piranha Plant as a weapon? That was a great part of Super Mario 3D World.

Propeller Box/Propeller Mushroom – I put these two together because they’re practically the same Power-up. Flying around in a propeller cap was fun, but drilling enemies on the ground was even more satisfying.

Super Mushroom – This one could be in S-class because of how iconic it is, but the fact is it’s just a key to gaining better power-ups and doesn’t do much except break boxes. B-Rank: is for Power-ups that are good, but have flaws that limit them from being great.

Bee Mushroom – Becoming Bee Mario and Bee Luigi in the Super Mario Galaxy series was so fun! You could fly around, stick to honeycombs, and even stand on flowers.

Boo Mushroom – I really liked the Boo Mushroom in the Super Mario Galaxy series, because it actually let you be a Boo, use their abilities, and read BOOISH! That’s so cool! The problem is, it was rarely available, which is really lame.

Goomba’s Shoe – There’s a special place in my heart for the Goomba Shoe. I loved smashing enemies and hopping on spikes in Super Mario Bros. 3. That’s just all there is to it, though.

Ice Skate – The Ice Skate reminded me a lot of the Goomba’s Shoe in that it made you immune to spikes and certain enemies. It even made you faster on ice. Just don’t try to slow down.

Light Box – Light Boxes were the key to finally beating Boos! Plus, they lit up dark places, win-win.

Metal Cap – Metal Mario is an awesome Power-up but has so many limitations, that can’t be ignored. Sure, you’re invulnerable but you can’t jump or swim, and you’re done if you fall into quicksand.

Mini Mushroom – The Minimushroom is a great power-up that lets you access small places and even run on water, but it’s instant death if you get hit.

Rock Mushroom – This shroom turned Mario into Rock Mario, where he could roll around like a boulder and destroy stuff. It felt like Majora’s Mask when Link turned into Goron Link, just less spiky.

Wing Cap – Allows Mario to fly. It was a blast to use in Super Mario 64 C-Rank: These power-ups are useful, but not great. They’re ok.

Cloud Flower – In Super Mario Galaxy 2, this flower could let you walk on and create clouds. It was cool in certain situations.

Red Star – The Red Star was fun for the sheer fact that it let you fly and gather coins in Super Mario Galaxy. The problem was, it was only used like the Power Balloon to get hard-to-reach items. In the end, it was kind of a let down.

Slow Flower/Speed Flower – The Slow and Speed Flowers do exactly what you think, slow down and speed up time, what made them good was that they tripled points and coins.

Statue Leaf – This power-up let Mario put on the Tanooki suit, but only be able to turn into a statue and not fly. The definition of just ok.

Superball Flower – is like the less-exciting cousin of the Fire Flower. It shoots “Superballs” instead of Fireballs.

Vanish Cap – The Vanish cap let people go through walls and enemies for 20 seconds. It was cool, but kinda meh in the long run. D-Rank: is for Power-ups that have one use in-game, but aren’t useful outside of that one moment.

Goomba Mask – Released in Super Mario 3D World and allowed players to sneak by certain enemies. It had its use, but isn’t something I’d seek out.

Power Balloon – Outside of getting coins in a high up place or skipping parts of an obstacle, the Power Balloon was nothing special.

Spring Mushroom – This Power-up is used in the Super Mario Galaxy series and lets Mario jump high. He can’t run or move fast in any way, just jump high. F-Rank: is for Power-ups that are useless

Luigi’s Cap/Mario’s Cap/Wario’s cap – Found in Super Mario 64 DS lets characters look like Luigi, Mario, or Wario and have their abilities. It was a gimmick that did nothing for me.

There you have it! What should we Rapid Rank next? Let us know and tell us your favorite Super Mario Power-up. Follow me on Twitter @movethejoystick and @cinelinx! Stay tuned for more!