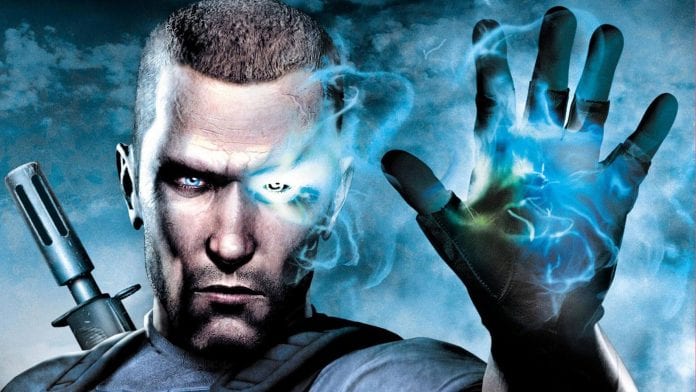 Psi-Ops: The Mindgate Conspiracy seemed primed for franchise potential and in my latest interview, I discuss what happened with the game’s director, Brian Eddy.

It’s been over 15 years since Nick Scryer and Sarah Blake infiltrated the terrorist organization, The Movement in Midway’s Psi-Ops: The Mindgate Conspiracy. The game gave players access to a variety of psychic powers to sneak, solve puzzles, and brutally take down enemies.

It’s story was a bit cheesy; embracing more of a B-movie style, but nonetheless fun because of it. Filled with twists and turns, along with some over-the-top (think old-school goofy James Bond) villains it was highly enjoyable to play through. Throw in some genuine horror elements and thrills throughout, and it seemed to constantly surprise you.

Where the game shined brightest, however, was in it’s gameplay. Built off the Havoc engine, it truly showcased what the technology was capable of. It featured a combination of stealth gameplay, full on action, and a plethora of abilities to play around with in a open (for the time) environment.

All of these elements worked together to encourage exploration and playing around to solve puzzles in a natural way. There are some incredible “eureka!” moments as players combined powers and destructible environments in unique ways to take down enemies and reach bosses. Between the addictive gameplay and fun story, Psi-Ops seemed poised for the franchise treatment. It was never meant to be, however, despite featuring one HELL of a cliffhanger gamers are still in the dark as to what could have been and why the series stopped cold. I recently had the chance to catch up with the game’s director, Brian Eddy, to discuss what went wrong and what a sequel might have given gamers. The Summer of 2004 was a particularly ripe period of time for gamers. With Red Dead Revolver, The Chronicles of Riddick: Escape From Butcher Bay, Driver 3, the genre-defining Spider-Man 2, Doom 3, Star Wars Battlefront, Silent Hill 4, and Fable, it was a smorgasbord of genres and stories. Sandwiched in among these sequels and franchise connected titles, was Midway’s Psi-Ops: The Mindgate Conspiracy.

It’s hard enough for a new IP to stand out, especially among such heavy-hitters, but Psi-Ops had an even more uphill battle. To start, it’s first outing at E3 2003 wasn’t exactly stellar. Back then, it was going under the title of ESPionage and many of the characters shown were mere place holders (as seen in these rarely seen concept images from the team):

“The game was in horrible shape and barely playable,” Eddy recalled. “It was actually quite horrible but Midway didn’t have anything to show so they had to show something new. It was a huge mistake to bring it–the team said don’t do it! We reworked a TON of controls and art when it was over. To managements credit they allowed us to continue to make the game and gave us more resources.”

When the game was shown next, the changes were evident and the buzz began in earnest. And yet even with solid critical reception upon its release, and the story getting optioned for a film treatment within the same year, the game struggled to sell, “Psi-Ops was actually one of the highest if not the highest rated Midway console games after it launched but the group in charge of Midway, at the time, determined it did not sell well enough to warrant a sequel.” Brian Eddy briefly explained why the crowded market isn’t solely to blame, “A big part of the reason it didn’t sell as well as it should have was poor marketing. People didn’t know about the game. A couple months before the launch of the game Midway completely revamped the whole marketing department and brought in a whole new team who had to become familiar with the game while inheriting a marketing campaign already in place from the previous group. So the game was caught in the middle and never got the chance to shine.”

Psi-Ops was far from the only game to have issues in this area and it was something the company never seemed to overcome seeing how it shuttered just five years later. “Midway struggled with the marketing side of the business for most of its existence, and we didn’t get the presence and prominence in the press and media we would have liked.” With the engine in place (built from scratch specifically for the game), the development team were eager to make a follow-up to the game. It’s clear they had big hopes for a sequel just based on the game’s ending.

In the story, gamers take on the role of Nick Scryer, an operative of Mindgate organization. His mind has been erased so he can infiltrate the terrorist group, The Movement. Sarah Blake kick starts his journey to recalling his memories (and telepathic powers), which we regain as the story plays out.

After the final boss goes down, Mindgate helicopters swoop in, supposedly to help now that Nick’s mission is completed. Sarah seems elated, but Nick Scryer puts a damper on things, exclaiming, “I remember everything now!” The pair run off as they come under attack, alluding to an even bigger mystery. As Nick brings down one of the helicopters using his telekinesis, it seems we’re in for another epic encounter…But then the screen goes blank and “To Be Continued” appears on the screen.

That’s it, that’s how it ended. It was a bold move, but unfortunately it has left gamers dangling for over 15 years now. Having played the game when it was released (a birthday gift from my best friend) I just had to ask Eddy about the plans for a sequel. Turns out, the developers are still wondering as well!

As Eddy explained, “I’d love to tell you….but it was actually never fully fleshed out. I would really like to find out one day also!”

While this doesn’t offer much closure for fans who played the game back in the day, he mentions at least one idea the team had been floating around, “The black helicopters alluded to the agency that put Scryer on the game’s mission were now out to stop him. He had become too powerful and was now a security risk. We had talked about a number of different directions to take the story but never committed to the final one since a sequel did not happen.”

Just because the story wasn’t finalized doesn’t mean they hadn’t discussed other elements they wanted to use in the sequel. As would be the case with just about any sequel, it would have expanded on just about every aspect of the original, with more powers and gameplay mechanics: “We talked about extending his existing powers along with introducing some new ones. We also really wanted to introduce more variety of gameplay with vehicles, bigger worlds, more and smarter enemies, etc… We didn’t get past the talking stages so no concrete powers or levels were defined but we had lots of ideas.”

While the first game did a great job of giving players options to solve puzzles and beat enemies, Eddy emphasizes their hopes for the sequel would have gone much further: “The core of the game was really meant to be a sandbox. You see this in the playroom room [of the original]. We made this to test out the powers and their interactions with each other, enemies and the environment. It ended up being so fun just to play around in that room that we added it as a feature to the game and the demo.” “I really enjoy game designs that give the player a bunch of elements, be it powers, weapons, vehicles etc…and then lets them decide how to use those elements to progress through the game. We tried hard to make sure the puzzles, bosses, and enemies in the game could be solved/eliminated in many different ways depending on how the player decided to approach each situation. We would have certainly expanded upon that methodology in any sequel.

“The ability to destroy and use more the environment was also something we wanted to do especially with the more powerful next generation systems. A good portion of the Psi-Ops team went on to work on John Woo’s Stranglehold where you can see some elements of the destructible environments.”

Is There a Way Forward?

Another setback to a potential sequel came in 2007 when a copyright lawsuit was filed by screenwriter William L Crawford III. He claimed Midway took the game’s story from his similarly titled screenplay. It ended up getting tossed out (as they shared almost nothing but the name Psi-Ops) over a year later, but obviously nothing was going to happen while that was pending. Just two years after that, Midway became defunct (though the writing had likely been on the wall before then).

Midway’s many assets and IPs were sold off to other companies and Eddy confirmed Psi-Ops was one of the properties scooped up by Warner Bros. “Psi-ops, along with hundreds of other Midway (and Atari coin-op) IP’s were all sold to Warner Bros. Only a few titles like Blitz, NBA Jam, and TNA wrestling were not included in the deal and sold to others. So if you want a sequel made (like most of the [dev] team) you need to hit up Warner Brothers.” Considering the slew of high-profile properties Warner Bros. currently owns, Eddy doesn’t seem hopeful for a Psi-Ops revival. Even so, he made it clear it’s still a story/property he’s passionate about. When asked if he’d be willing to work on a sequel if the opportunity presented itself, his answer was an emphatic yes. “Absolutely. I’d love to do the sequel we wanted to do so everyone could finally know what happens after the ‘To be continued…’!!”

Even if a sequel isn’t in the cards, Eddy would jump at the chance to give modern players the chance to play the original (we’ve even listed it as one of 10 games that deserve a remake), “Given the power of the new consoles coming this year it would be incredible to do…an enhanced remaster.” Between the story, characters, and engaging mechanics Psi-Ops had all the makings of a great new franchise and perhaps still could if given the chance. For now there’s nothing in the works, but perhaps if fans show enough interest, Warner Bros. would consider it.

While we may not currently have the closure on Nick Scryer’s story fans have been hoping for, I greatly appreciated Brian Eddy taking the time to talk with me about what could have been.