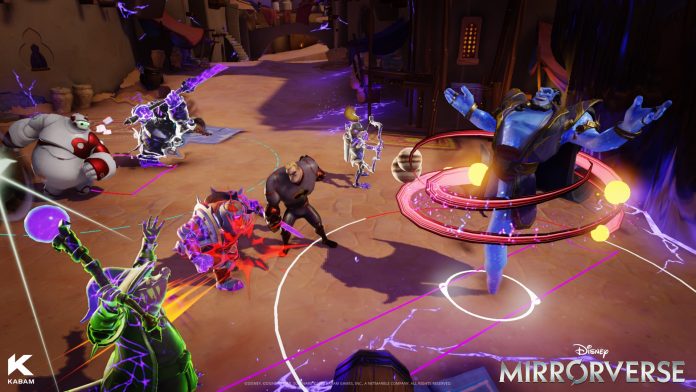 If you’re in need of seeing Disney characters become awesome RPG heroes WITHOUT going to the Kingdom Hearts franchise, you’ll soon have a new option. Disney Mirrorverse is a new team-based action RPG coming to mobile devices on June 23, 2022. Get your first look at it below:

In Disney Mirrorverse, players enter a new, divergent universe separate from the settings of the original Disney and Pixar films. In these high-stakes worlds, dark and light magic influence the lands, evolving iconic Disney and Pixar characters into Mirrorverse Guardians who are ready for combat and poised to fight against the Fractured, a malevolent threat whose goal is to shatter both realities.

Filled with visually stunning 3D animated characters and environments, players will unite a team of empowered Guardians and take full control in real-time, action-oriented gameplay. As players progress through the game, they’ll collect a large roster of characters and assemble a powerful team of three to take into battle. Each character has unique battle abilities, including an armored-up Sulley, the ultimate personal-battle companion Baymax, the vengeful draconic mage Maleficent, and many more Guardians who stand ready to defend against those seeking to conquer the Mirrorverse.

● ENTER A DIVERGENT DISNEY UNIVERSE & STORYLINE – Experience a new storyline that authentically reflects dynamic Disney and Pixar characters in a way fans have never seen before as they defend against a new dark, unrelenting threat – the Fractured.

● CHOOSE AND CUSTOMIZE STUNNING 3D DISNEY AND PIXAR CHARACTERS – Enter richly detailed new worlds filled with 3D Disney and Pixar characters that have been powerfully evolved to match this high-stakes universe. Uncover the intriguing backstories of these Guardians and discover their surprising and authentic special abilities equipped for epic battle and adventure.

● EMBARK ON EPIC QUESTS AND EXPERIENCE ALL-NEW DISNEY STORIES – Unlock unique narratives and battle Fractured enemies to obtain rewards and restore the worlds and characters of the Mirrorverse that have been corrupted by fractured magic:

○ STORY MODE: Immerse yourself in an original storyline of tasks and quests to complete–experience the story of the Mirrorverse and the Ages of Isolation, Discovery, and the Fractured.

○ STORY QUESTS: Updated every few months, new chapters to the main Story Quest or side stories featuring select heroes and villains will be constantly added for players to battle through and compete.

○ EVENT QUESTS: Players can participate in limited-time quests that tie into real-world Disney and Pixar-inspired content and events, and offer unique characters, awards, and progression items during a specific timeframe.

○ ALLIANCE MISSIONS: Join an Alliance and work together to complete event milestones and earn great rank-based rewards by competing against other Alliances.

○ DANGEROUS DUNGEONS: Players compete against other players and alliances worldwide in ever-changing dungeons to earn progression items and other unique awards.

You can get pre-registered for the game, and learn more about Disney Mirrorverse by heading to their official site.