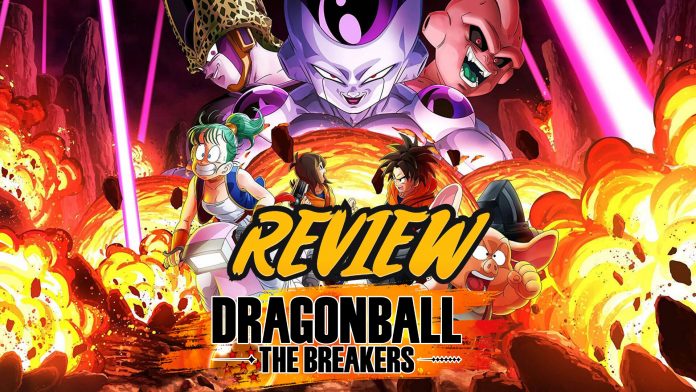 Dragon Ball: The Breakers brings the DBZ universe to the asymmetric survival genre and despite some hiccups, has the potential to stand out.

Today, one of the fastest growing genres in gaming is the survival genre. With games like Minecraft, The Forest, Rust, Dead by Daylight, and more dominating will there be any room for a new survival title? Well, Bandai Namco has thrown their name in the hat with the release of Dragon Ball: The Breakers.

Can it stand on its own as a fun, new addition to the survival genre? Or will it be caught in its trap by trying too hard to take hold of the competition? Let’s find out now.

The more power keys you collect, the less time it will take for the StartUp System to activate. These power keys are spread all throughout these sprawling maps. There are three maps and each map is divided into 5 large areas A, B, C, D, and E. This is where the real challenge comes in. As you are searching the area for power keys the Raider is searching for you and other civilians you consume or destroy. As they level up, they gain the ability to destroy entire sections of the map.

If your power key is already active for that area, you are fine, but if it hasn’t been activated (or found) before the area is destroyed…That power key is gone for good. The fewer power keys you have activated by the end of the game, the longer it takes for the StartUp System to reverse the Temporal Seam and the longer you’ll have to outwit and survive the villain.

You can always take the more aggressive approach and attack these Raiders right out of the gate. As you play, you can collect items like weapons, cool-down drinks, Senzu beans, and of course “Change Power” supplements. By gathering Change Power, you level up your “Transphere” meter. Once the meter is full enough you can “Dragon Change” into the embodiment of a Dragon Warrior previously set up before the game started.

This can be a pretty big game changer in a playthrough. Depending on if the Raider is a lower or higher level, you can tip the scales of the battle rather quickly. During my time with the game, there have been a few times that my team was able to gather enough Change Power and attack the Raider head-on. This ended the match due to the Raider’s health level reaching 0%, this did not happen every match though because of the matchmaking and scaling issues I have seen.

You’re Going to Die A LOT

Most of the matches I joined would have some type of balance to it. More times than I can count, however, my group ended up matched up with a player who had leveled the Raider above level 25. In one game my team and I were matched with a level 45 Raider…It was by far the shortest game I played. Bandai Namco stated from the beginning that Raiders would overpower the survivors in this game, but come on.

I mean yes, the Raiders are going to overpower everyday citizens. Raiders like Cell, Freiza, and Majin Buu are going to destroy everything in their path even if they are in their first or second form. The problem I have is the fun factor in some of these match-ups, is that the scales need to be tipped a bit more in the favor of the survivors.

When collecting Change Power, it should at least give you enough power to do some sort of damage to the Raider, though it does little damage, if you and your team don’t attack the Raider at the same time, you’re dead on arrival. It makes things quite frustrating at times.

Don’t get me wrong, playing the game as a survivor is still thrilling. Running for your life all game, hiding from the overpowered supervillains, and even fighting them in a last-ditch effort to survive gets the blood pumping.

What holds playing as a survivor back from being a better experience, though, is the lack of leveling. Though you level your character up as you play, you cant level up your battle perks or strength. The only reward you receive from leveling up is summoning tickets and in my playthrough, they haven’t been very fruitful. If these tickets not only gave you Dragon Warrior accessibility but also gave you items you could level up for your survivors, I feel it would be much more worth your time to play as the survivors.

Being Evil is More Fun

I feel the highlight of this game is playing as a villain (Raider). Just as in other survival titles, most of the characters featured are huge fan favorites. I found that my favorite two characters to play are Cell and Frieza. Both of these characters have always been menacing characters who overtly control the environment they occupy.

When you play as a Raider you can upgrade their perks, assets, and energy blast as you progress…something you cannot do with survivors. This gave me the desire to play as these characters much more often, so I set my priority for matchmaking to Raider instead of a survivor. There is something so fun about being an overpowered supervillain who can destroy entry sections of the map with one blast.

During these matches, I quickly picked up the best way to locate and destroy all survivors. As Frieza you have minion characters like Zarbon and Dodoria to command at the push of a button. By releasing one or both of these characters, they will locate local survivors and attack them briefly. This was an awesome addition to playing as Frieza and I can only hope in the future you’ll have more access you some of his other elite soldiers like the Ginyu Force!

Playing as Cell was a bit different. Since Cell is the “perfect organism”, he can sense power levels in his area and he wants to do things on his own. Cell needs no one, and I realized that after playing as him. Cell is a very powerful, and quick, character to play as. Even in his larva form, you are very fast and powerful.

Maybe over time as they add new content to the game the survivor’s class will be updated more. I know it has been teased that in the upcoming Season we could be facing off against Vegeta in his Great Ape form and could get some Dragon Ball Super characters added in the future, but until then I think I’ll just have to force myself through these match to get my chance as playing as a Raider.