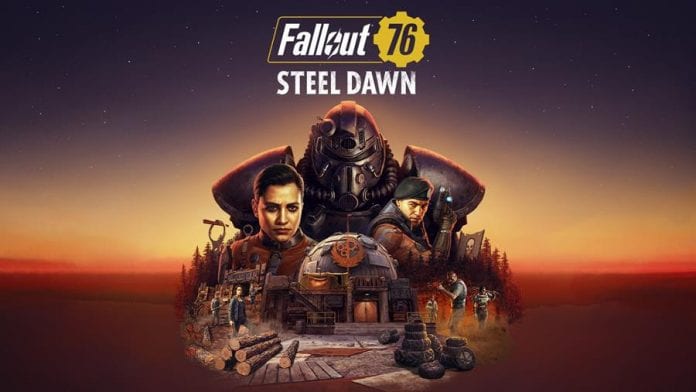 The Brotherhood of Steel is heading to the Appalachia in the latest Fallout 76 expansion titled Steel Dawn and developers revealed a gameplay trailer and the release date for the free content update today.

“Steel Dawn is the first chapter in the new Brotherhood of Steel questline, free for Fallout 76 players. Paladin Leila Rahmani and her troops have arrived from California to establish a new Appalachian chapter. Work with or against the other Factions to achieve success. Visit settlements populated with new NPCs and unlock powerful weapons and armor from the Brotherhood arsenal. Join in their mission to rebuild society and aid in securing valuable technology – but only you can determine how it will be used,” developers said.

Steel Dawn is set to launch on December 1.

“Build and decorate in new underground, instanced spaces separate from your main C.A.M.P. Complete a new quest and get your first Shelter free on Dec. 1,” developers said. “[And] recruit two new allies as you rank up during Season 3, who offer bonuses exclusively from your C.A.M.P.”

On Dec. 15, players will also see the start of a new season and S.C.O.R.E. board in addition to improvements to the game.

Fallout 76 is available to play now on PC, Xbox One, PlayStation 4 and backwards compatible with the Xbox Series X|S and PlayStation 5.