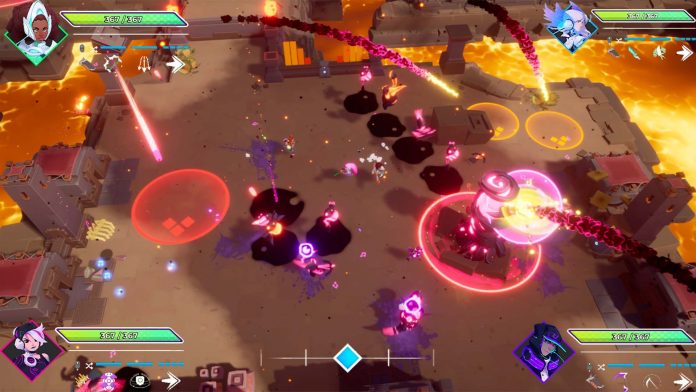 During today’s Indie World Showcase, Noodlecake and Drastic Games showed off a new trailer for Soundfall and surprising us with a release TODAY.

If you were intrigued by Soundfall‘s blend of looter-shooter/rhythm-based gameplay, then you won’t have to wait long to get your hands on it. On top of giving players a new look at the game during the Indie World showcase this morning, they also surprised everyone by launching the game right now:

In Soundfall you play as Melody, a Guardian of Harmony – a musical guru mysteriously transported to Symphonia by the Composers to battle the forces of Discord. Under threat, Symphonia – a world where music comes to life – you fight your way through the corrupt Timbrelands, eradicating Discordians and restoring Harmony to the environment while wielding powerful abilities, legendary weapons and endearing allies in the race to restore balance.

Play to the Beat!

Soundfall is a fast-paced music-based dungeon crawler that combines looter-shooter action with rhythm-based gameplay to create a world of music unlike any other. The closer you time your actions to the rhythm of the soundtrack, the more powerful you become!

Unlock powerful new abilities, and explore Symphonia to discover incredible music-based weaponry! Customize your loadout with more than 500 pieces of equipment to choose from!

Up to 4-Player co-op

Defend Symphonia with your friends, either locally or through online co-op!

5 characters to choose from!

Play as one of five unique musical geniuses, each with their own play style, weapon and special abilities!

Explore the world of music!

Import your own music (PC Only)