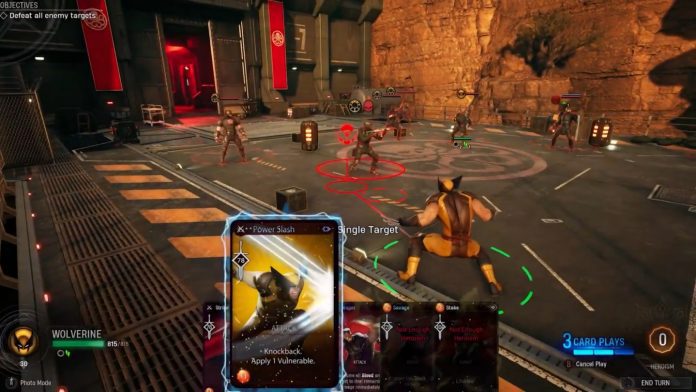 After an impressive reveal trailer at Gamescom, 2K/Firaxis has revealed the first look at gameplay for Marvel’s Midnight Suns.

Seeing a new Marvel game from the developers behind XCOM is pretty much all I needed to know to be on board and ready to play. Thankfully, we now have some gameplay to feast our eyes on, and it isn’t exactly what I was expecting: card playing. Don’t get me wrong, I’m still very much digging the tactical aspects, but bringing in the card aspect isn’t where I thought this was going:

In Marvel’s Midnight Suns, players take on the role of the Hunter – the first customizable original hero in the Marvel Universe, brought back to life from a centuries-long sleep to lead the Midnight Suns, with heroes spanning across the Avengers, X-Men, Runaways, and more. Forced to unite in opposition to Lilith, Mother of Demons and parent to the Hunter, the Midnight Suns must rise up against the darkness in the face of fallen allies and with the fate of the world at stake.

As the Hunter, each day in Marvel’s Midnight Suns starts off in the Abbey, the last safe haven from Lilith’s demonic influence and the player’s very own secret mystical base. Players will move freely throughout the Abbey from a third-person “over-the-shoulder” perspective and greet their fellow heroes before embarking on missions.

Marvel’s Midnight Suns features a new engaging and deeply customizable battle system that rewards clever thinking with Super Hero flair. In Marvel’s Midnight Suns, players select up to three heroes to bring into combat and all hero abilities are represented through cards. Each hero, including the Hunter, has a unique set of cards that can be arranged and customized to tailor that character to the player’s preference and playstyle. In addition to cards, players will also be able to utilize their environments as they shove, leap, and smash their way to victory.

“In Marvel’s Midnight Suns, you aren’t learning how to fight or gradually grow stronger – you and your fellow heroes are already legends, and must combine everything in your arsenal to stop Lilith,” said Jake Solomon, Creative Director at Firaxis. “Cards provide a new and refreshing way to approach tactics, allowing us to really go all-out in designing a combat system that makes every hero feel, look, and play differently.

After completing missions, players return to the Abbey where they’ll develop relationships and strengthen their personal bonds off the battlefield with some of Marvel’s most beloved heroes, such as Iron Man, Wolverine, Captain Marvel, and more. As the Hunter, players will get to see heroes in a new light and unlock additional abilities as they increase their Friendship through a variety of activities, such as getting to know heroes better through dialogue options, Hangouts, gift giving and more.