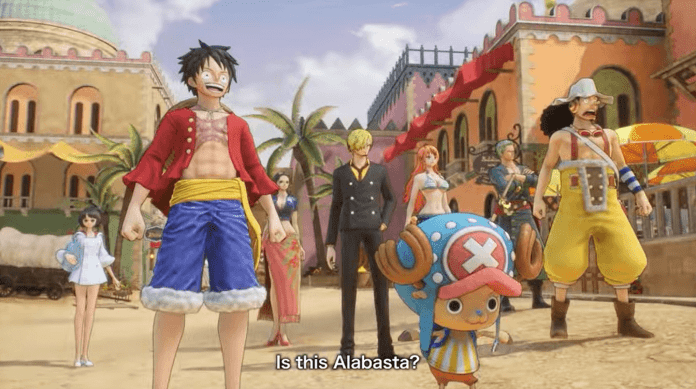 The upcoming One Piece Odyssey video game will see the Straw Hat Pirates returning to Alabasta…or at least a memory of it. Today, Bandai Namco released a new trailer, previewing the beloved desert kingdom.

ONE PIECE ODYSSEY transports the Straw Hat Crew to a mysterious new island where they embark on quests and fight powerful enemies and massive bosses in exciting turn-based battles. The game is introducing a new chapter for these famed pirates, with an original story and new characters developed under the guiding hand of series creator Eiichiro Oda. ONE PIECE ODYSSEY is sure to retain the charm, humor, and chemistry of the anime with its colorful artistic style and stunning visuals, and by starring the series’ original Japanese VO actors.

It’s been over 2 decades since the Alabasta arc first released. Yet, to this day, it remains an important landmark in the ongoing One Piece story. So, to go back (even in a memory) with the current crew brings a sort of mix of nostalgia and reinvigoration. It also leads to the question of “What other memorable places will we revisit?”.

One Piece Odyssey launches on January 13, 2023 for PlayStation 5, PlayStation 4, Xbox Series X|S, and PC via STEAM. You can preorder the game now, here.