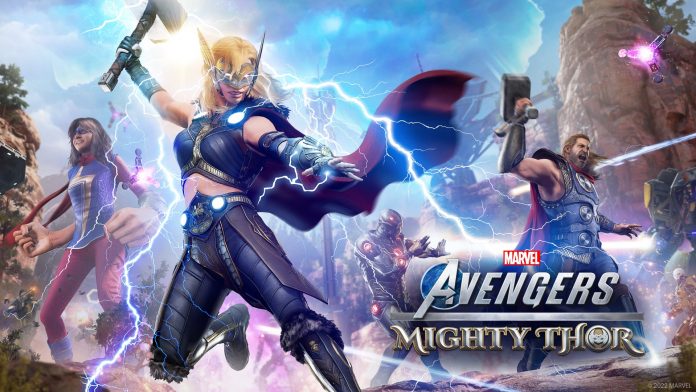 Earlier this week, Marvel’s Avengers added Jane Foster’s Mighty Thor to the playable roster, but is the new character worthwhile, or just phoning it in?

The Mighty Thor, Jane Foster, has landed in Marvel’s Avengers. The game, which has been relatively controversial since its launch due to complaints of limited content and bugs, has slowly added more content since its release almost two years ago.

PlayStation players were treated to exclusive character Spider-Man late last year, but for other platforms, Jane Foster is the first character to be released since Black Panther, in August of 2021.With The Mighty Thor being the first hero added in 2022, many were disappointed to be receiving a character so similar to Thor; a character already in the game.

I’ve spent the last couple of days leveling her up and getting the hang of her combat and will give a breakdown of what to expect from The Mighty Thor in the game right now, so you can decide if you want to re-download and jump back in.

The Mighty Thor: How Does She Play?

I won’t beat around the bush, The Mighty Thor plays very similarly to Thor. If you’re going into the game expecting a totally new experience, you won’t get it with the addition of Jane Foster. Many of her moves and abilities are essentially identical to Thor’s. This may be great for fans of Thor eager to work towards a new goal in the game, but may not be great for people looking to learn/master a new character.

That said, The Mighty Thor sets herself apart a bit when you reach the Specialty and Mastery upgrade trees. The customization of Jane’s abilities allows players to choose how they want to focus their character, with some skills increasing Jane’s ability to support her team, such as allowing her support heroic to revive downed teammates, whilst other skill options prioritize combat and intrinsic regeneration.

It’s also worth noting that, whilst Jane Foster and Thor share a lot of the same combat and abilities, the bright side is at least The Mighty Thor is as good as Thor. It would have been very disappointing to get a hero so similar to Thor added to the game only for them to be a worse version. Whilst the similarities may mean they lack uniqueness, at least the comparison isn’t hindered by The Mighty Thor having worse abilities.

Personally, I’m eager for the hero roster to expand and don’t mind characters that draw on similarities between powersets in between characters who are very different and require more work. Black Panther was a different, completely new experience in the game, with very different combat, abilities, and an entirely new area to explore.

Rumors have been running rampant for months about Captain Marvel potentially joining the roster. Whilst I’d potentially expect more major gameplay updates than what we’ve received so far, in the future, I’d be okay with receiving heroes like Jane whilst the development team work on larger updates, with new characters and/or areas to play in.

Different players will have different views on whether they find Thor and Jane’s similarities to be cutting corners. However, there are other elements of this character release that do feel like corner-cutting.

I cannot be absolutely certain it’s not a bug, but myself and other players have commented on the fact that Jane’s voice is exactly the same as Black Widow’s when performing certain moves and takedowns. Only time will tell if this is a bug or if this was intentional, and if they did reuse certain pieces from Black Widow’s voice lines for Jane. It’s hard to see that as anything other than developers trying to push out a hero as quickly as possible.

Another area of The Mightly Thor’s release I was personally quite disappointed by was the lack of looks available at her release. The only alternative looks Jane Foster has are the ones unlocked through her challenge card and one that you can buy in the Marvel Avenger’s marketplace (the in-game store which uses currency obtained through challenge cards and real-life money). Whilst I didn’t expect her to have a huge wardrobe like many of the original characters, I had hoped there would be some looks I could acquire from the cosmetic vendor in-game.

Although the current cosmetic looks for Jane are limited, I am happy with the designs. Through the challenge card you are able to earn multiple variations of Jane Foster’s Valkyrie look from the comics, complete with Undrjarn the All-Weapon instead of Mjolnir. If big, sweeping capes aren’t your thing, the challenge card also comes with looks similar to Jane’s base outfit, but without the large cape following behind her.

While this may seem like a small thing to be so excited about, by far one of the most exciting parts about the addition of Jane Foster to Marvel’s Avengers is the introduction of long, flowing hair! The game has shied away from long hair on any of its heroes, with most characters having appearances with hair no longer than shoulder length. Black Widow’s look from her solo film does have longer hair, but it is designed so it stays stuck to one side with very minimal movement. The Mighty Thor finally brings long hair, and with it, lots of customization options for future cosmetic appearances that may significantly change how each Avenger looks.

So yeah, there are some elements of Jane that feel like corners were cut to get her out as soon as possible. Thankfully there are other elements about the new hero that feel like they add a lot to separating her, at least cosmetically, from her other hero counterparts.

Is It Time To Re-Download?

Ultimately, whether or not it’s time to hop back into Marvel’s Avengers will be a very personal choice depending on what you’re looking for out of this game. Whilst it may seem like I’ve had plenty to complain about here, I spent most of the Wednesday following The Mighty Thor’s release playing the game non-stop. So for me, at least, the developers have clearly done something right.

Despite being similar to Thor, Jane’s combat is smooth and enjoyable. It makes you feel like an Avenger as you play. Would it have been cool to see new areas to play in, or a new character with totally new powersets? Sure, but that doesn’t mean Jane has nothing to bring to the table.

If you’ve been looking for that nudge to get back into this game, then focusing on Jane’s challenge card or her character-specific missions may be exactly what you need. However, if you’re looking for something a bit more in-depth, and the idea of playing the game a few months ago filled you with dread, I can’t guarantee that the addition of The Mighty Thor will be enough to have you enjoying the game again.

For me, Jane has been just enough to pique my interest again, and I look forward to what may be on the way in the future for Marvel’s Avengers.