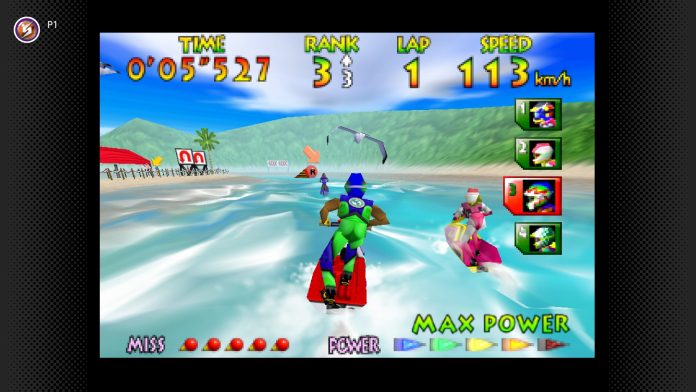 The classic, water-based, racing gaming is coming soon for Nintendo Switch Online + Expansion Pack subscribers. Nintendo has revealed the latest edition to their N64 line-up, Wave Race 64, will be available on August 19th (this Friday).

Wave Race 64 is a fast and fluid racing game originally released shortly after the launch of the Nintendo 64 system in 1996. Choose from one of four watercraft racers, each with their own abilities and style, and try to capture glory in Championship Mode, whip around the tracks in Time Trials, pull off tricks in Stunt Mode or challenge a friend in 2P VS. Mode.*

Wave Race 64 features nine challenging courses set across scenic locales. Go airborne with dolphins on the golden shores of Sunset Bay, cruise under the bright lights and tall buildings of Twilight City, feel the crashing waves on Sunny Beach or chill out on the frigid waters of Glacier Coast, just to name a few. Plus, racing conditions will change with the weather, making the water choppy or covering the course with fog. The waves will even respond to the way that you and your rivals move!

I love some Wave Race, but considering it’s one among a few racing titles available on the N64 line-up for Switch, I’m crossing my fingers we get some other N64 goodness in the next few months that go beyond the sports titles we’ve been getting. Either way, I suppose it’s hard to complain about having new ways to play older games…