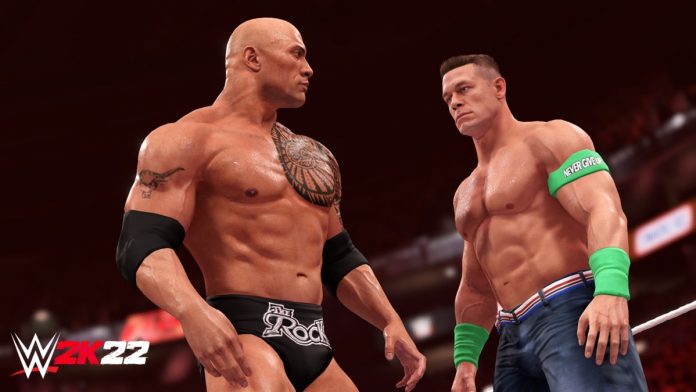 2K has announced a slew of details for WWE 2K22, including the cover star, some more gameplay features, and the pre-order bonuses you can pick up!

It’s been a while since the last WWE 2K game, and 22 is looking pretty good so far. On top of a host of gameplay changes (detailed late last year), the time off looks to have improved things fans have been wanting for years. Today brings a new announcement trailer for the game, which will launch on March 11th, as well as more overall details on the game:

2K today announced the full set of features for WWE® 2K22, the next installment of the flagship WWE video game franchise from Visual Concepts, featuring Rey Mysterio® on the cover in celebration of his 20th anniversary as a WWE Superstar. A globally recognized icon, Rey Mysterio is synonymous with the Mexican tradition of lucha libre – featuring fast-paced action, incredible aerial maneuvers, and masked competitors – and paved the way for many high-flying, agile Superstars. The decorated high-flyer has held multiple championships across his storied career, performing in his own unique style and wearing an array of colorful and iconic masks, proving that “The Ultimate Underdog” hits different.

“Representing the culture of lucha libre as the cover Superstar for WWE 2K22 is a moment of great pride for me,” said Rey Mysterio. “I’m looking forward to sharing the stories behind the big moments of my career with a dedicated community of players and connecting with WWE fans in a whole new way as they play through my 2K Showcase.”

“Throughout his career, Rey Mysterio has staged multiple comebacks to prove his resiliency time and time again, and through it all, has cemented his legacy as a living legend of sports entertainment,” said Alfie Brody, Vice President of Global Marketing Strategy at 2K. “In that same spirit of resiliency, WWE 2K22 strikes back with a slew of upgrades and community-requested features to give players complete control over the WWE experience.”

All the Features Players Can Handle

From the redesigned gameplay engine to new controls and upgraded visuals, WWE 2K22 is set to look, feel, play, and “Hit Different.” The engine, coupled with WWE 2K’s most stunning graphics to date, ensures an unprecedented level of realism for the franchise. Alongside an updated and intuitive control scheme, as well as an immersive presentation and varied camera angles, players will feel the pressure and reward of every punch, kick, and slam.

Popular game modes including the returning 2K Showcase – starring Rey Mysterio – incorporate new features and updates, allowing players to relive the iconic moments behind Mysterio’s most famous matches. In MyRISE, players chart their own paths to superstardom. With Universe Mode and the upgraded Creation Suite, WWE 2K22 offers players the ability to fully customize their WWE experience down to the smallest details. From taking control over brands, premium live events, match results, rivalries, and more – or creating the ultimate custom Superstar personas, arenas, and championships – players can share all their creations with the global WWE 2K22 community with first-time-ever, cross-platform sharing.

In addition, WWE 2K22 will introduce new modes to the WWE 2K experience: MyGM and MyFACTION. In MyGM, players step into the role of a WWE General Manager and call the shots on their way to building the biggest brand in the WWE Universe. From drafting the ultimate roster of WWE Superstars and Legends to developing iconic rivalries and championship showdowns, players will get the chance to take the reins and prove themselves on sports entertainment’s biggest stages. With the franchise-first MyFACTION mode, players can collect and manage their dream faction with weekly events and regular updates, providing tremendous challenges and replay value.

On top of this, 2K has announced pre-orders for the game are going live today, and detailed the various bonuses you can get (depending on the version you choose) if you do so:

The Standard Edition will be available for $59.99 on previous-gen platforms (PlayStation® 4, Xbox One consoles and PC) and for $69.99 on current-gen consoles (PlayStation® 5 and Xbox Series X|S) in both physical and digital formats;

The Cross-Gen Bundle will be available for $79.99 and includes the digital Standard Edition and the Starrcade ’96 Rey Mysterio Pack across previous and current-gen within the same PlayStation and Xbox consoles;

The Deluxe Edition will be available for $99.99 for PlayStation 4, PlayStation 5, Xbox One, Xbox Series X|S in both physical and digital formats, and on PC in digital format. The Deluxe Edition includes the Standard Edition plus the Undertaker Immortal Pack; a Season Pass to all five post-launch DLC content packs; the MyRISE Mega-Boost and SuperCharger packs; limited edition WWE® SuperCard content (included in-box for physical copies only). The Deluxe Edition will be available from March 8, 2022 – three days early! Players who purchase the PlayStation 5 or Xbox Series X|S edition will also receive the Starrcade ’96 Rey Mysterio Pack;

The nWo 4-Life Digital Edition will be available for $119.99 for PlayStation 4, PlayStation 5, Xbox One, Xbox Series X|S, and PC. Celebrating 25 years of the faction that turned the sports entertainment world on its head, in addition to the Standard Edition, and all bonus content included in the Deluxe Edition, the nWo 4-Life Edition comes with MyFACTION EVO Cards and alternate nWo attires for Hollywood Hogan, Scott Hall, Kevin Nash, and Syxx plus a playable Eric Bischoff character, WCW Souled Out 1997 and WCW Bash at the Beach 1996 arenas, and the nWo Wolfpac Championship. The nWo 4-Life Edition will also be available from March 8, 2022 – three days early!